Off the Shelf: Smooth Talk (Blu-ray) 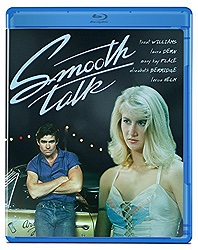 This is one of the great lost films of the 1980s and one everyone should see.

It's criminal that Joyce Chopra's 1985 coming of age drama Smooth Talk isn't talked about more in discussions of the best movies of the '80s. It's a beautiful film, and a sad and scary one, too.

Based on Joyce Carol Oates' short story "Where Are You Going, Where Have You Been?" the movie tells the story of 14-year old Connie (Laura Dern), a young woman whose body has matured faster than she has and who is anxious to leave home and be treated as an adult. She lies to her parents about where she's going, hanging out at the mall or the beach with her friends and enjoying the attention she gets from men. One man whose attention she catches is Arnold Friend (Treat Williams), who shows up at her house one day when she's alone and demands a date. 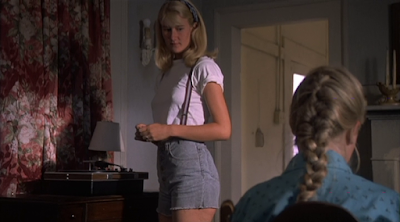 Smooth Talk works brilliantly on two levels. On the one hand, it is a lyrical and gorgeous coming of age movie that fully understands what being 14 feels like in a way that so few films are able to capture. On a second level, it is an absolute horror film in which we as the outside observer must bear witness to the terrible inevitability of Connie's fate. The greatness of Laura Dern's performances is that she looks like a woman and she wants to act like a woman but she is far from being a woman. She is innocent and naïve and only somewhat aware of the power she had over men, too busy finding it flirty fun to understand the dangers of the big bad wolves lurking at every turn.

That's the first hour of the film. The final third takes a sinister turn, becoming a 30-minute exchange between Dern and Treat Williams that is terrifying and heartbreaking. Neither Chopra nor the screenplay by Tom Cole (a playwright and the director's husband) place the blame on Connie -- the doesn't make the mistake of suggesting she brought it on herself -- but there is a quiet devastation to Connie's romantic notions about the world, about men, about sex being destroyed in the span of a single afternoon. The end of the movie is completely shattering, attempting to restore the status quo of Connie back with her family and being a kid but we know it's a lie. There's no going back. Even James Taylor's easy listening classic "Handy Man" playing over the end credits becomes the most impossibly sad song ever recorded. 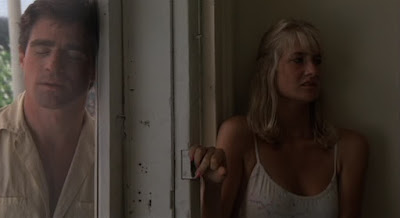 I don't want to come on like the Mayor's Wife here, acting like I'm the only one championing this little movie that not enough people have seen. I myself only saw it for the first time last year when I was putting together an "underrated '85" list for the Rupert Pupkin Speaks blog. I was aware of the movie because I remembered reading Roger Ebert's four-star review, but it was hard to come by for years. No so anymore, as Olive Films have reissued the movie on Blu-ray for the first time. There are no special features, but the transfer is solid and the film speaks for itself. I'm so glad more people will now have the opportunity to find this movie.

Smooth Talk won the Grand Jury Prize at Sundance the year it came out, then played for one week and grossed a total of $16,000 before disappearing into near obscurity. Chopra directed only one more narrative feature, The Lemon Sisters, in 1989 before turning her attention fully to documentary filmmaking. The fate of Smooth Talk is as heartbreaking and unfair as the movie itself. Luckily it now has a second chance.