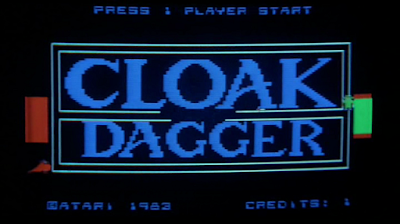 Nostalgia is a funny thing.

We look back fondly on our younger years for a variety of reasons. Life was easier then. We had fewer responsibilities. No bills, no job, no lousy shower that won’t stop leaking no matter how many times you fight your way through traffic to the local big box hardware store. The fog of memory smooths out rough edges, leaving behind good feelings and a warm glow that engulfs things we did, toys we played with, and movies we watched. Sometimes those movies were seen in theaters, but more often (for those of a certain age) they were experienced via VHS as fuzzy pictures on tiny TVs. And we loved it.

Media marketers and suit types know that nostalgia is a direct line into the pleasure centers of adults with disposable income. Reboots, rehashes, and reimaginings reign on the big screen during the Summer months because nostalgia sells. But it doesn’t blind. It gets proverbial butts in padded seats but adults are smarter than their kid selves. Sure, bad movies make big money. Warm feelings can gloss over filmmaking sins. People have low standards. But audiences are rarely fooled, which is why going back as an adult to things you loved as a kid is a bad idea.

There are exceptions, of course. Some family-friendly movies and TV shows hold up to adult scrutiny. Others really, really don’t. In between, there’s a sea of half-remembered films that are worth a second look because adults find different things to enjoy in movies than kids do. Some people think being a grown up means leaving the past in the past. I think it means being able to stay up past your bedtime and watch whatever you want.* 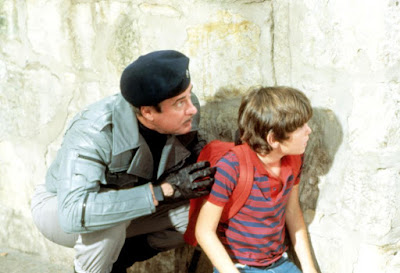 Cloak & Dagger was released in 1984 as a double feature with #FThisMovieFest 5’s own The Last Starfighter. It’s the story of Davey, played by Henry Thomas, an imaginative kid who finds himself in the middle of a real-life spy story after witnessing a murder and taking possession of an Atari cartridge containing hidden government secrets. I watched Cloak & Dagger a lot as a kid. I’m not sure how. I imagine it was probably recorded off TV at some point, or borrowed from the library, or rented, or won on the game show Double Dare. It’s got action, spy stuff, and the promise of hidden rewards for playing a lot of video games. I can see why I liked it.

The older I get, the more I side with the parents in movies who don’t believe it when their kid tells them something crazy is going on. Parents want their kids to be safe. Mostly that means providing basic necessities like food, shelter, and clothes; and teaching them how to be self-sufficient good people who will one day help and protect others. It rarely means saving them from killer spies. That kind of stuff only happens in movies. So I get why Dabney Coleman -- who does double duty here as Davey’s widower father and imaginary super spy Jack Flack -- dismisses his son’s story. This is a kid who spends most of his time playing role-playing games and hanging out in the back room of a local video game shop. It’s only natural for a kid reeling from the death of his mother to retreat into a world of make believe.

The fact that Coleman’s dad is a stoic military man who works long hours to provide the basic necessities mentioned above makes the way he handles Davey’s claims of shadowy murderers more impressive. No, he doesn’t immediately believe Davey’s story, and yes he takes away all his toys and games in a fit of frustration, but he also lets a scared Davey sleep in his bed and gets up early to make his son an appointment with a child therapist. All perfectly reasonable and responsible. By the end of the movie, Davey’s dad is putting his own life in danger to save his son’s. Forget grumpy ‘80s parent. He might be Father of the Year. 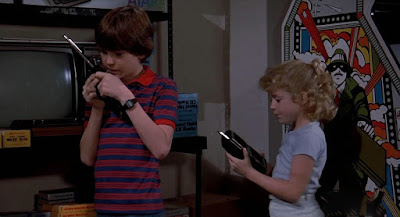 Something else I missed as a kid is how well screenwriter / friend of the site Tom Holland blurs the line between fantasy and reality. The film opens with an action sequence that is revealed to be part of a role-playing game when Jack Flack is chased down by two massive twenty-sided die. For the rest of the movie, Flack appears to Davey as part imaginary friend, part guardian angel. He doesn’t just remind his young charge of spy stuff he’s learned from games. He gives him specific direction to get out of dangerous situations. It’s even suggested that Flack can make himself visible to other people if the situation demands it. He’s more than an echo from a kid’s imagination. That mixture of fantasy and reality isn’t always successful. Holland sometimes leans on Jack when he needs to write Davey out of a corner. The blurred reality gives viewers another way to think about the story, though, and I have no doubt that if Cloak & Dagger were released today there would be a reddit thread dedicated to the fan theory that the movie takes place entirely in Davey’s imagination.

The rest of the film is a mixed bag, but it’s a fun kind of mess. Henry Thomas is just as perfect an everykid here as he was in E.T.. Davey’s best friend Kim, played by Christina Nigra, also comes across as a regular kid but more in the sense that she isn’t a great actor. Still, her combination of gameness and exasperation sell their friendship more than if they had cast a flawlessly perky child pro. Coleman is convincing enough as mustachioed spy and stern father. The thugs are unstoppable villains with superhuman strength and terrible aim. The old couple Davey meets later feel like they were plucked from a Hitchcock film. Cloak & Dagger’s action sequences are small but effective, wringing suspense out of characters changing seats on a tour boat and banging around a parking garage in a stolen car. The most elaborate set piece comes at the end of the film, when all the characters converge in an airport hostage crisis with a ticking timebomb for good measure. There’s violence and a few dead bodies, but the film mostly pulls back to spare its young viewers. Too bad no one told director Richard Franklin that the image of a bullet hole in a cracked computer monitor is more scarring to kids with unwieldy German last names than seeing a character get shot would have been. 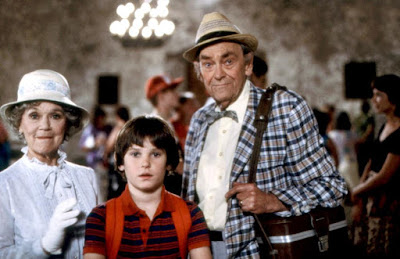 Cloak & Dagger is a fun little adventure. It's also a good video game movie. Like The Last Starfighter, it trounces The Wizard and Super Mario Bros. on every level. Nintendo may have saved the video game industry, but they ruined video games in movies. Cloak & Dagger comes from the age of Atari, when games were popular but not entrenched. The perfect toy to use as Macguffin in an early ‘80s kid thriller. The video and board games on display might be the most realistic thing in Cloak & Dagger—the perfect way to resell the movie to a modern nerd culture obsessed with tabletop and retro video games. The idea of top secret blueprints hidden at the end of a difficult game seems quaint in the era of tool-assisted emulated speed runs, but the lure of hidden treasure is universal.

It’s been fun talking about and rewatching the movies of 1984 this past week, dredging up memories of movies at friends’ birthday parties and video rentals. This look back at Cloak & Dagger could just as easily have been about a dozen other movies from what was apparently a key movie watching year for me. Not everything I loved as a kid lives up to my memories, but that’s okay. Nostalgia has its place in adult movie watching. It can be a force for good. It’s time we ripped nostalgia from the clutches of cynical studio spreadsheets and used those warm feelings as a starting place to find new ways of appreciating old favorites. Even if the movies aren’t great, at least you’re watching movies —- and you don’t have to ask your parents’ permission.

*Being an adult also means doing research to make sure you aren’t writing about a movie that has already been written about on a website. I did not do that. If I had, I’d have seen that Patrick wrote about Cloak & Dagger back in 2013. Thankfully, being an adult also means you can make your own rules, be stubborn, and try your best to turn a beloved film blog into an unofficial Cloak & Dagger fan site.