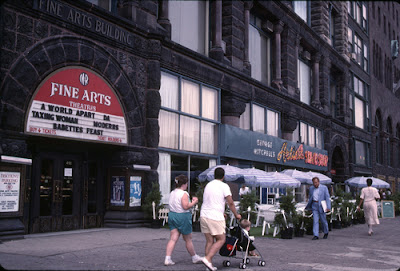 1984 was a banner year for film and a banner year in my life. I started student teaching at a local high school and moved back home after four years at the University of Illinois. The student teaching would lead to the job I have now held for the past thirty-two years, the salary from which I used to pay for all those movie tickets and all that popcorn. Moving back home allowed me to reacquaint myself with all the wonderful Chicago movie theaters I haunted as a teen: the Varsity in Evanston, the Parkway, the Biograph, the Music Box, the Film Center of the Art Institute, and especially, the Fine Arts.

According to the website Cinema Treasures, “in December 1982, M&R Amusement Company announced plans to convert the two theatres [in the Studebaker Building, the former World Playhouse] into a cinema complex, The Fine Arts, becoming the first theater in the Loop to open in 10 years. They opened on December 25, 1982 with Moonlighting in Theatre One and Veronica Voss in Theatre Two. In 1983, the Studebaker stage was walled off to create Theatre Three, utilizing a dressing room to create a projection booth. In 1984, the same approach was taken to create Theatre Four. Theatre Three was renovated, so both could share a newly built booth in between. Theatre One held approximately 1,200 seats, Theatre Two approximately 550 seats, Theatre Three had 240 seats and Theatre Four had 158 seats. Showing mostly art and independent films… the theatres eventually closed in November 2000.” The Fine Arts Theater would be one of my “unofficial film schools” for the better part of eighteen years.

Looking back on a list of all the films released in 1984, I am amazed at the sheer quantity of films that I saw at the Fine Arts: Amadeus; Once Upon a Time in America; This Is Spinal Tap; Blood Simple; Paris, Texas; The Killing Fields, Repo Man; The Razor’s Edge; Stranger Than Paradise; A Passage to India; Birdy; A Soldier’s Story; Iceman; Racing With The Moon; Under the Volcano; Brother From Another Planet; Choose Me; Comfort and Joy, and Secret Honor. Woo!

What a banquet, what a smorgasbord of riches. Of course, the fact that the theater was in the city and I was in the suburbs was part of the experience. My father, as a rule, objected every time I expressed a desire to travel downtown. The fact that he commuted from the suburbs to his downtown job every goddamn day for almost forty years lent some weight to his argument, I guess.

“Why the hell do you want to go down there? I moved HERE to get you away from down there!”

I used to leave school at the bell and race downtown to catch the five o’clock show. Everyone else in the world was experiencing rush hour traffic, I was experiencing a late afternoon matinee. I would share the theater with just a handful of senior citizens. I used to describe these weekday screenings as a “conspiracy of pleasure” between members of the audience. I saw dozens of films this way in 1984. 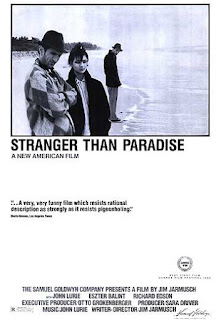 Stranger Than Paradise may have changed my conception of film and, in the words of Bill Hicks, “squeegeed my third eye quite clean” more than any other movie before or since. I had never seen anything like it. The film is in black and white. Director Jim Jarmusch frames his shots carefully: each scene is one static shot, with no editing and very little movement in the frame. The individual scenes are connected with fade-outs and fade-ins. The static and unmoving mise- en-scene reflects the unchanging nature of the characters’ lives.

Stranger Than Paradise is one of the funniest films ever made. The humor is to be found in the quiet dichotomy between the style of the film and what is going on in the frame. A character explains what a TV dinner is. An old Polish woman wins a card game. Characters travel hundreds of miles to another place, only to discover that it is a lot like the place they just left. This film cracked me open and expanded my view of what a film could be. Thank you, Jim Jarmusch.

Back in the 1980s, some films never made it out to the suburbs; they were only shown in the city. I remember seeing Spike Lee’s She’s Gotta Have It at the Fine Arts; his next film School Daze made it out as far as a close suburb, Hillside. It wasn’t until Do The Right Thing that I could enjoy a Spike Lee joint without having to drive for an hour. I sometimes joke that it is still the case that unless I drive into the city to see something, that film will never make it out to the suburbs. You’re welcome. 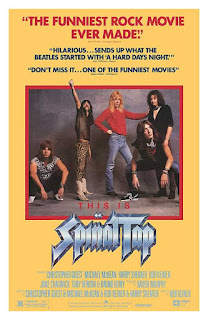 This Is Spinal Tap was such a film. Although a crazy success on home video and rock group tour busses, if you wanted to see it in 1984, you had to drive to the Fine Arts Theater downtown. Spinal Tap achieves something few comedies ever do—although a brilliant parody of rock documentaries and a vicious satire of the music business, the audience also comes to know and love the members of the band. Portions of the film have become iconic: exploding drummers and amplifiers that go up to “eleven,” but the real value of the film is found in a late scene where Christopher Guests’s character tells Michael McKean’s character to “do a good show.” Not many comedies this scathing, indeed, not many comedies this funny get us to care about the characters in quite this way. To top it all off, the bulk of the film was ad-libbed by its cast, working from a loose outline, and the film features parody songs written by the cast and skewering several genres of popular music: “Give Me Some Money” (a Beatles send-up), “Listen to the Flower People” (psychedelic excess), “Big Bottom” (heavy metal misogyny), and “Tonight, I’m Gonna Rock You, Tonight” (heavy metal redundancy). Like Stranger Than Paradise, This is Spinal Tap opened my eyes to what a film could be, expanding on the lexicon of classics and “the canon” my University film professors had lectured on and screened. God, the hundreds of hours I spent there.

Thank you, Fine Arts Theater. I miss you.
Posted by Patrick Bromley at 5:00 AM

Email ThisBlogThis!Share to TwitterShare to FacebookShare to Pinterest
Labels: 1984 movies, jim jarmusch, stranger than paradise, this is spinal tap