Nobody leaves this place without singing the blues.

I love Adventures in Babysitting. It’s a crazy, goofy, fun little movie from 1987 that always makes me happy whenever I see it, and has lost none of its appeal for me over the years. It’s also one of those movies that the PG-13 rating seems to have been invented for and which seemed to be ubiquitous during the mid-to-late 1980s and early ‘90s. It’s a little sexy, a little dangerous, and a little foul-mouthed, but none of the characters die and it’s not particularly mean-spirited. It’s from Disney’s Touchstone Pictures, which is the same studio behind Who Framed Roger Rabbit and Armageddon. So it’s like Disney, but with Playboy references and the F-word.

This was director Chris Columbus’ first film. Before he helmed Mrs. Doubtfire and the first two entries in the Harry Potter franchise, or even discovered The New World back in 1492 (the year he sailed the ocean blue), he directed this teen comedy that feels very much as if it’s pursuing the same brand of filmmaking that John Hughes mastered. To be clear, Adventures in Babysitting is not of the same caliber as the oeuvre of John Hughes, but it does often feel like “lesser Hughes,” and lesser Hughes is just fine with me. We shouldn’t forget that Chris Columbus spent his early years in Hollywood working with Steven Spielberg as the writer of the Spielberg-produced films Gremlins, The Goonies and Young Sherlock Holmes, so he learned from the best. It’s also worth noting that Columbus did eventually get to work with John Hughes on Home Alone and Home Alone 2, so he must have done something right. 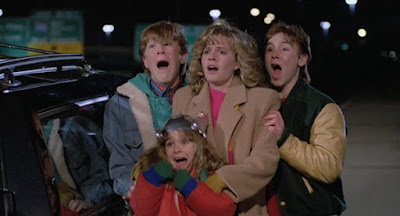 The script is a big part of what makes the film work. I mentioned that it’s goofy, but if you’re on board with the goofiness then you’re bound to enjoy yourself. If you aren’t on board with the goofiness, it’s going to be a loooong hour and forty minutes. This is a movie that puts a babysitter (Elizabeth Shue) and three kids in constant danger for comedic effect with each predicament being worse than the last. By the end of the movie, your disbelief should be completely suspended. Luckily, I find the movie makes it easy to turn off your brain as well as your cynicism and just sit back and enjoy the show as it hops from one awkward situation to another, each strung together thinly by just enough plot to keep the ride going. That’s what the movie is, ultimately: a fun ride desperate to live up to the “Adventure” in the title. It’s also desperately trying to replicate many of the things that made Ferris Bueller’s Day Off such a unique success the year before. As a Ferris Bueller copy, it falls short. Taken as its own thing, though, it’s really fun.

Another key component to Adventures in Babysitting is the cast. Elizabeth Shue really only had one big success under her belt with 1984’s The Karate Kid, and her biggest box office work was still ahead of her. This movie comes two full years before she stars opposite Michael J. Fox in Back to the Future II and later the third chapter, and a year before her role opposite Tom Cruise in Cocktail. Aruba, Jamaica, ooh I wanna take you….Shue is imminently watchable in ANY role she’s in, which is probably why she’s an Academy Award nominated actress. Some people just have that star quality, the IT factor, and Shue’s got it. Can you tell I really like Elizabeth Shue? I think she’s hella talented and she’s been in some of my favorite movies.

We also get a very young Penelope Ann Miller in her second feature film appearance. She’d later go on to feature in some really big, important films like Carlito’s Way and The Artist, but I’d be lying if I didn’t tell you that I prefer her work in Kindergarten Cop and The Shadow. She’s great in this movie as Shue’s friend who gets stranded in a bus station in downtown Chicago. 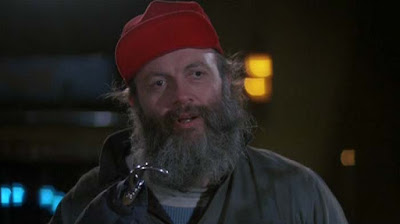 Not surprisingly for a movie that takes place in Chicago, the city itself plays a major role. While the film also shot in Toronto, the Chicago locations give the film a ton of character and atmosphere. There’s really no replicating the look of Chicago, and Adventures in Babysitting utilizes that look to its fullest potential. Chicago really does have all those smoking sewer grates and rain-slicked streets. Hey, you know who else made movies that took place in Chicago? John Hughes.

John Hughes movies also place huge importance on the music featured in the movie, so I guess it just makes total sense that Adventures in Babysitting takes a cue from the master and puts the songs in the movie front and center. Chris Columbus’ film uses old Motown and ‘50s and ‘60s rock and roll rather than new pop songs from then-current bands, and it benefits the film. It’s always going to be an ‘80s movie, but it’s somehow less of an ‘80s movie by having a timeless soundtrack. Music would always be important in the films of Chris Columbus, particularly Home Alone. It’s hard not to tap your toes to golden oldies. 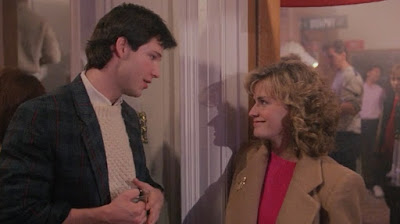 Adventures in Babysitting hasn’t enjoyed the kind of notoriety that other comedies from the ‘80s have, especially not the kind that the work of John Hughes has managed to secure over the last three decades. I suppose I can understand this; it is, after all, no classic. But it is a whole lot of fun, with a cast that you can’t help but like and a story so ridiculous that you can’t help but be won over by it. I think the movie works because it tries to be a John Hughes movie, but ultimately it ISN’T a John Hughes movie, which is what eventually holds it back. This may be an homage that feels like lesser Hughes, but there are worse things to want to be.