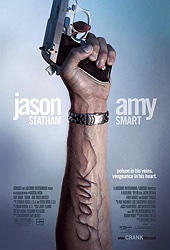 As an action movie junkie, I am so happy that Crank exists. I would also be happy if I never saw another movie like it.

Right off the bat, I know this statement is faulty because Crank: High Voltage exists. To a lesser extent, so does Gamer. There was a brief time in movies when this kind of Mountain Dew-fueled, video game-inspired Dude Bro aesthetic was the calling card of writing/directing team Mark Neveldine and Brian Taylor. That period seems to have passed, as both filmmakers have hung up the Red Bull and branched out on their own. That might be for the best. I like their work, but their movies tend to exhaust me and not in the way that, say, Gareth Evans' films do. Watching a Neveldine/Taylor movie is like being forced to play a game of "why are you hitting yourself?" for two hours.

But there is a place for them in action cinema, and seeing Crank for the first time in 2006 was a thrilling kick in the dick. The title of their debut feature is no accident, as this is an action movie for the meth-addled set -- hyperkinetic and jittery, frantic and loud, causing all of your teeth to fall out the longer it goes on. Working with handheld prosumer cameras (many of which were purchased at Best Buy) and shooting on rollerblades or with any number of crazy rigs, Neveldine and Taylor and DP Adam Biddle achieve an action film untethered by physics. It uses the language of video games both in its visual style and in its storytelling, introducing a main character whose only real objective is "get more life." It pushes the form until it bends without breaking.

The premise is simplicity itself: it's Speed, only instead of a bus it uses the human body. The excellently-named Chev Chelios (Jason Statham) is a hitman working for an L.A. crime outfit. As the movie opens, he is injected with a drug by fellow gangster Ricky Verona (Jose Pablo Cantillo) designed to inhibit his body's production of adrenaline, slowing his heart until he dies. Chev wakes up to discover what has happened and quickly realizes that by engaging in outrageous behavior, he can keep his heart rate and adrenaline up and stay alive long enough to either find an antidote or, at the very least, to make sure that Ricky Verona is made to pay for killing him. And with that, we're off and running... 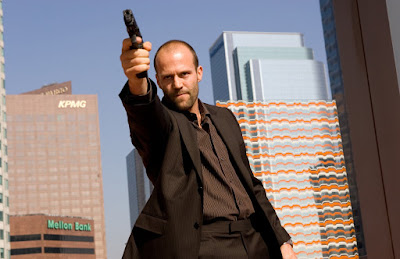 The style and aesthetic of Crank is every bit as exciting as it is irritating. Every time I watch it, I think to myself "I've never seen an action movie like this before." Then I immediately think "I don't want to see another action movie like this." For as kinetic as the movie is -- and kudos to Neveldine and Taylor for coming up with a story, no matter how silly, that matches exactly the aesthetic for which they've become known -- there are just as many stutter cuts and what Brian Collins coined as "Avid farts" and too much nu-metal on the soundtrack for the movie to avoid being completely obnoxious. When it comes to Crank, you have to take the bad with the good.

Because there's a lot of bad. Much as I appreciate the energy of Neveldine/Taylor's style, their bratty need to push buttons is fucking irritating. Sometimes it's fun, such as a scene in which Chev chops the gun-toting hand off of a bad guy then runs out of bullets himself and picks up the severed hand to use that gun. Other times it's juvenile but innocuous enough, like when they constantly use pop songs that are ironically incongruous to what's happening on screen -- "Achy Breaky Heart" or "Everybody's Talkin'" or Jefferson Starship's "Miracles." More often, though, it's fratty in a real garbage way. I mean, I'm not suggesting that Neveldine and Taylor are racists or misogynists, but they have certainly made a movie that is both. Almost anyone in the movie who is not a white man exists as something to be laughed at (in fairness, Chev is the butt of many a joke as well, but it's a different kind of laugh), whether it's Statham yelling that he's going to "beat some black ass" or the stereotypical Latino gangsters (every Latino in the movie is a gangster save for Efren Ramirez, who exists to be ridiculed as a [possibly homosexual?] club kid) or the Asian characters that populate the Chinatown sequence or the film's females, nearly every single one of which is a prostitute or stripper. In the movie's rooftop climax, there are woman who are either naked or in bikinis standing around inside of giant plastic bubbles. They are literally set dressing waiting to be shot at.

Maybe I'm being too sensitive, of course. Maybe the fact that the movie's bad guys keep women standing around in bubbles is meant to be an indictment of their own sexist shittiness. I'd be more open to consider that argument if the film's only partially developed female character -- Chev's girlfriend, played by Amy Smart -- wasn't such a horribly written stereotype as well. She exists to be a pain in Chev's ass, her vacuousness threatening their lives because she forgot to turn off the waffle iron or pausing in the middle of a firefight because "she forgot to take her birth control." Her most significant -- and unfortunately most notorious -- scene in the movie finds her being raped by Chev in the middle of the street in Chinatown. He tries having sex with her in public to get his heart rate back up and she refuses, pushing him away and shouting "no" only to eventually get turned on and relent (which, of course, is an even more dangerous message to send) in a scene that starts out ugly and then tries to play for laughs, only serving to make it even uglier. It's really too bad, too, because Amy Smart gives a really good comic performance, channelling old-school Goldie Hawn in her adorable daffiness. That sex scene is a true low point for everyone involved, indicative of the sneering, childish, "wouldn't it be FUNNY if...?" approach that Neveldine and Taylor take to the movie. 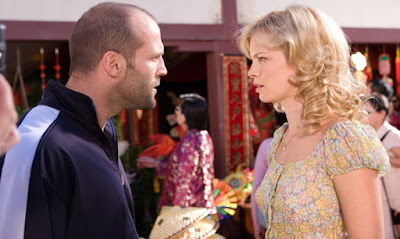 It's hard to imagine that Statham was not the filmmakers first choice, as he's maybe the most significant component in the movie's success. They originally had Johnny Knoxville in mind for Chev Chelios, and later were ready to go with a version of the film with Seann William Scott in the lead. But Statham is Crank's masterstroke. Now, of course, his name is synonymous with the action genre, but at the time of the movie's release he was still better known for his work in Guy Ritchie's movies than as an action star, having only appeared in the first two Transporter films by 2006. Seeing him in Crank felt like a revelation: not only did he kick all kinds of ass and perform his own stunts (underscoring the idea of Chev putting himself in harm's way, since both the character and the actor appeared to be in danger practically at all times) but he was allowed to be funny in the process. He gets laughs not by making jokes but by his reactions to the lunacy around him, rolling with the ridiculous events as though they confirm his suspicions about how the world works instead of taking him by surprise. Sure, he's the cool guy hero in the violent cartoon world of Crank, but Chev Chelios is more Daffy Duck than Bugs Bunny.

As much as I enjoy the hyperactive idiocy of Crank, it still sometimes feels like a movie trapped between two worlds -- it pushes action filmmaking into new territory but then will flatline for sections at a time, playing it sort of safe (for lack of a better phrase) and being more traditionally commercial. Maybe this is a result of fear on the studio's part; having never seen anything like Crank before, they may have asked Neveldine and Taylor to reign it in a little. That's where Crank: High Voltage comes in. Having proved to Lionsgate that audiences were into what they were doing (Crank was a hit) and wanting to take the outrageousness even further, Neveldine and Taylor go completely fucking bananas in the sequel, which features villainous severed heads, kaiju Statham battles and Bai Ling. Crank 2 makes Crank look like Transporter 3. As a fan of the movie's more experimental formalist qualities, I like the sequel even more. But, then, that's a story for a future column. 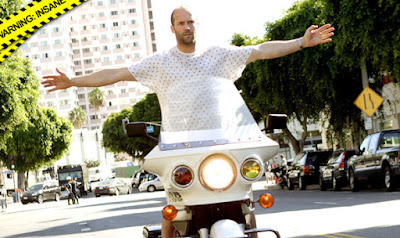 Since I began writing these #HeavyAction columns a few years ago I have wanted to cover Crank but was way too intimidated by its outrageous stupidity to trust my own ability to put its charms into words. After all, it's a movie about which I have many terrible things to say despite the fact that I still enjoy it. Neveldine and Taylor's dogged determination to be shitheads gets in the way of me loving the movie at almost every turn so that I have to qualify my own affection for the movie: "Yeah, it's crazy and it's fun but you have to ignore all the racism and misogyny." In a better world, Neveldine and Taylor would be deliberately amplifying these aspects of the movie as a way of commenting on their latent presence in so much of the action genre, bringing them to the foreground as a way of exploding them once and for all. But we don't live in that world, and I'm giving them too much credit in wishing for as much. In this world, they just think that shit's funny. Crank is an action movie designed like a video game and with a worldview informed by one, too. Unfortunately it's Grand Theft Auto.