It Came from the '80s: The NeverEnding Story 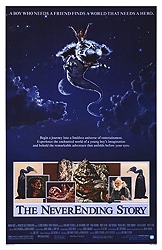 I had originally intended to write up The NeverEnding Story as part of 1984 Week, but between trying to get everything ready for #fthismoviefest and all of the great content being put out by all of our other writers, it never quite happened. Hopefully that window hasn't yet closed.

For the first half of its running time, The NeverEnding Story might be a legitimate masterpiece of fantasy filmmaking. The second half bungles that status, so while the movie is still quite good overall -- and certainly a very important movie in my childhood memories -- it fails to live up to the title of "masterpiece." This probably comes as no surprise to you, reader, who has never once considered the words NeverEnding Story and "masterpiece" in the same sentence.

But it's not just my nostalgia talking. Prior to revisiting the movie for the purposes of this column, I don't think I had seen the movie in 20 years. And while it turns out my memories of it are still very accurate, revisiting it as an adult allowed me to see it with very different eyes. This isn't just a brilliantly realized fantasy film, but also an often deeply profound meditation on grief. And here I was a kid just thinking it was a movie about how sad it is when a horse dies. 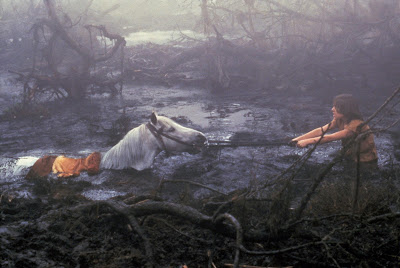 Based on Michael Ende's 1979 novel -- though apparently deviates from it so much that the author filed suit against the filmmakers -- The NeverEnding Story follows Bastian (Barret Oliver), a young boy feeling lost in the world. His mother has passed away. His father (Gerald McRaney) tells him to get his head out of clouds and keep both feet on the ground. The kids at school chase and bully him. The only place Bastian feels happy is within the pages of a story, which is what leads him to swipe a mysterious book (the titular NeverEnding Story) from a book shop and hide in the attic of his school to spend the day reading.

The story, as it is, takes place in the magical land of Fantasia, where all of the people and creatures have gathered because their lives are threatened by The Nothing, a mysterious force that is wiping out everything in its path. At the same time, the Childlike Empress who rules Fantasia has fallen ill and a boy adventurer named Atreyu (Noah Hathaway) is charged with finding the cure. Off Atreyu goes, encountering luck dragons and Swamps of Sadness and sneezing tortoises and Rock Biters and a giant wolf name Gmork, all while Bastian reads on and discovers he might be less an observer in the story and more of a participant.

It's no secret that I love monsters and creatures and physical effects, all things that The NeverEnding Story has in abundance. The period from 1982 to 1985 was really the best run of the kinds of movies that incorporated a lot of these things, probably because we were still in the aftermath of Star Wars and in the nascent days of VHS and both the independents and studios alike were flooding the market with genre films. The NeverEnding Story hit right at the peak. I remember hearing Elric Kane say on my beloved Killer POV that what made the '80s special for genre was that it was maybe the only time in history in which the budgets matched the imaginations of the filmmakers on a large scale, and that's totally true of The NeverEnding Story. The movie marks the first English language film from co-writer and director Wolfgang Petersen and with a budget of just under $30 million it was, at the time, the most expensive movie ever made outside of the U.S. or Russia. The money is on the screen: models, miniatures, matte paintings, forced perspectives, front projections, rear projections, rubber suits, latex appliances -- every trick in the book is utilized to ensure that Fantasia is realized down to the finest, furriest, scaliest, mossy detail, creating a film that looks and feels like nothing else. This is true movie magic at work -- a triumph of imagination and creativity. It's not just the design, though, but the way it's executed that elevates The NeverEnding Story above countless other fantasy films from the early '80s. What makes the stuff truly special is that every fantastic creation is given real personality. We remember Falcor and Rock Biter and Morla the ancient tortoise both because of how they look and for the believable characters created to accompany the effects. 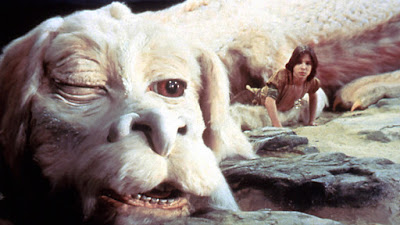 But the wraparound story back on Earth works, too, because it has actual stakes. Don't get me wrong, I love the storytelling bookends in something like The Princess Bride because it's sweet and it's funny and it's got Peter Falk, but I'm not really invested in whether or not Fred Savage kicks that cold. Conversely, we want Bastian to overcome his problems. We want him to stop being picked on. We want his father to understand him. We want him to come to terms with the death of his mother. We want him to finish that goddamn book because fuck you this is America and you're not gonna tell ME that my book never ends. Trump 2016!

It was the stuff with Bastian that really resonated with me on this recent viewing. I enjoy the Atreyu story because it's a traditional hero's journey and is where we get to see all the incredible effects (which absolutely still hold up), but can't really relate to the story of a boy who willingly risks his life for what amounts to strangers because he's a hero and an adventurer and that's just what he does. But a kid who's more comfortable existing in stories created by others? Who would just as soon lose himself in a book (or a movie...) than confront the world around him? Yeah, I get why the kid me connected to Bastian. Also, I may or may not have looked like Barret Oliver at that age. 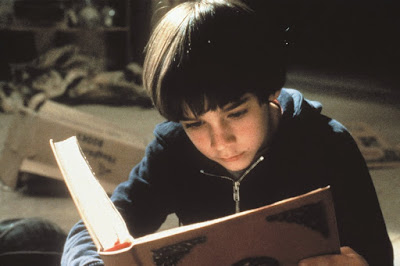 So much of what happens in the movie works as a metaphor for Bastian's grief over the loss of his mother. The most obvious example -- and the one that fucked so many of us up for life as children -- finds Atreyu and his horse Artax making their way through the Swamps of Sadness, where anyone passing through that begins to feel sad will sink and die. That's what happens to the horse (thankfully offscreen) in a scene that, in my memory, occurred much later in the film instead of at around the 30 minute mark where it actually takes place. Of course it's sad to watch an animal drown (though it provides an interesting example of the Kuleshov effect: we are told that the horse is sad so every cut to its near-expressionless horse face suddenly takes on a look of sadness), but what the scene is really expressing is Bastian sinking under the weight of his own grief. The Nothing is his own inability to understand death: something was there, and now there is nothing (as the Rock Biter says, "Even a hole would be something. This was nothing."). The Rock Biter himself, one of the movie's best FX creations and best characters, made me think of Bastian's own father, with whom he shares a single uncomfortable breakfast at the start of the film. When the Rock Biter and Atreyu cross paths late in the film, the giant has bore witness to the Nothing wiping out a swath of Fantasia and gives a very sad, very moving monologue about his own inability to stop it. He looks at his hands -- his good, strong hands, the hands of a giant made of stone -- and laments his own powerlessness. That's Bastian's father, the man Bastian looked to for protection and to keep his own family safe, ultimately powerless to save his mother. It's heavy shit.

But then The NeverEnding Story shifts gears in its second half and the metaphor starts to break down, instead becoming a story about the necessity of imagination. Fantasia stands in for all of the creativity in the universe, and for Bastian to turn his back on that (as his father is insisting he do) would the Nothing wins and imagination is dead. It's a worthwhile message -- one also explored in Labyrinth, a movie that is often mentioned in the same conversations as this one -- but The NeverEnding Story is unable to support them both equally. I'm all for a movie being about more than one thing, particularly when so few movies can bother to do half that, but the signifiers and meanings are so large here that they can't really co-exist. This is a situation where one or the other would have worked, but by trying to do both it does justice to neither.

We arrive at the end where the ultimate betrayal of the movie takes place. No, it isn't Bastian having to give a name to the Childlike Empress so that she won't die, even though that's the moment that really tries to bridge the two halves of the movie's metaphors, combining Bastian's commitment to what Fantasia represents with him coming to terms with his mother's death. Side note: I have never once been able to make out the name he assigns the Empress, which I assume is a deliberate directorial choice designed to obscure his mother's name. Looking around the internet, it seems that the name he yells out is "Moonchild" (which is supposedly the name he gives in the book), which probably wasn't his mom's name and is almost as bad as "Childlike Empress." 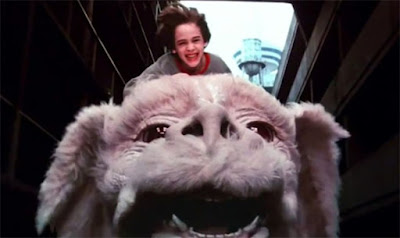 No, the real betrayal is when The NeverEnding Story, a wonderfully imaginative epic about the need for fantasy and the way we can use art to process our own emotions, becomes a stupid revenge story about a kid who uses his own luck dragon to get back at some bullies. Maybe this comes directly from the book. Maybe this was someone's idea of a "feel good" ending that would send audiences out of theaters forgetting all about the dead horses and ancient tortoises resigned to their deaths and wolf stabbings and self-loathing rock giants. Instead it comes off as forced, tacked on Hollywood bullshit that cheapens everything that came before it, not the least of which is Bastian's own sadness, suggesting that he just has to make those mean kids shit their pants and then he'll be alright.

I still think The NeverEnding Story is two-thirds of a great movie and precisely the kind of film that could have only been made in the early '80s. The production design is incredible. Jost Vacano's photography has a scope and an eye for beauty not typically afforded other "kids' movies" of the decade. For as much shit as Limahl's theme song gets now, I genuinely love the score composed by Klaus Doldinger and Giorgio Moroder (at least in the American version). It is a strange, singular movie -- one which speaks so loudly to some and totally repels others. I suspect I connected with it so strongly as a kid for the same reasons I found myself admiring it as an adult: it captures the imagination without talking down to kids about some dark stuff. It's easy to write off now as just nostalgia porn or some ironic hipster Buzzfeed bullshit, but the movie is important.