Review: How to Be Single 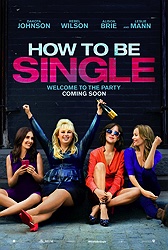 How to Be Single is a messy (some might say sloppy) assortment of scenes more than a cohesive movie. In particular, Alison Brie’s scenes feel like they’re out of a different movie than the ones starring her co-stars (Dakota Johnson, Leslie Mann and Rebel Wilson) similar to the way that Christian Bale was a stand-alone bit in the movie The Big Short. And you know what? I’m ok with that because How to Be Single is smart, insightful, energetic, funny and sweet enough to warrant a recommendation. This movie is a cut above the usual romantic comedies. I had a great time watching it (which, interestingly enough, was late opening night in a theater all by myself…you know, single). I laughed out loud a few times, chuckled a lot and had a smile on my face throughout the entire movie.

I also love the perspective of this movie. It’s not like the traditional romantic comedy where we have a single woman looking for a man or vice versa and all of their friends are in successful relationships. All of the A and B characters in How to Be Single are indeed single and the movie explores the different aspects of being single, including enjoying its freedoms and exploring its challenges. Some characters are looking for their match online, while others are not trying at all and some are going out to the bars every night. I really responded to this approach to telling the story. It’s well-rounded and almost plays out like an anthology of interconnected characters. I didn’t love all of the characters, but, for example, if Rebel Wilson showed up on screen I knew I just had to wait a couple of minutes before her shtick was over and I could get back to easier company like Dakota Johnson, Alison Brie, Jake Lacy or Damon Wayans Jr. 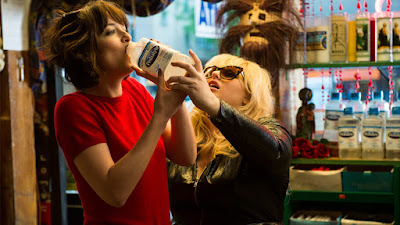 The plot in brief: We follow a group of lonely hearts in present day New York City. Alice (Dakota Johnson) is recently broken up from her long-time boyfriend and playing the field. Robin (Rebel Wilson) is her wilder bestie. Meg (Leslie Mann) is the workaholic sister of Alice. David (Damon Wayans Jr.) is one of Alice’s love interests, as is Tom (Anders Holm), the owner of a bar frequented by the characters in the movie including Lucy (Alison Brie) who inexplicably is looking for Mr. Right on a plethora of online dating sites (does she not know she’s Alison Brie?). The movie co-stars Nicholas Braun, Jake Lacy and Jason Mantzoukas as other male suitors.

The dialogue in this movie is amusing, but the real reason How to Be Single works is its cast. This is a great cast! Dakota Johnson is a capable dramatic actress and also good with an off-hand, funny line reading which makes for an appealing lead. Leslie Mann is more likeable and funny in this movie than she has been in several years. Rebel Wilson is like Rebel Wilson on a chalkboard, but whatever. And the guys (especially Jake Lacy, who is very funny and should be in more movies) are all solid. But the real reason to see How to Be Single, above all else, is to bask in the charm of Alison Brie. OMG is she a movie star. Between this movie and the super underrated Sleeping with Other People, she should be in every romantic comedy. And comedy. And movie. My goodness. 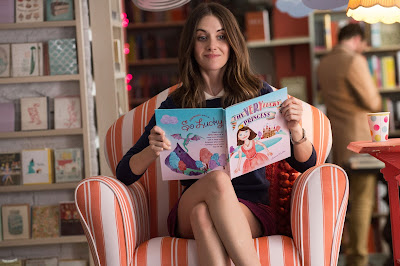 How to Be Single is really just a pleasant experience. I love romantic comedies set in New York. There’s something just inherently romantic and cinematic about them and this one is a prime example. The production design is very appealing in a young, urban professional kind of way and the music is enjoyable as well. I appreciate that this is not a romantic comedy with a “funny” musical score like so many of them often have. I don’t want to speak for other people but a lot of this movie’s detractors I think just don’t like romantic comedies or are missing the point of them. It’s all formula, and How to Be Single is no different. It’s not re-inventing the wheel, but it’s a very well-made and enjoyable example of the genre which, when done right, is pretty goddamn infectious. If you’re a fan of this type of movie, you should like it. I think there’s something to it.

Note: Does it pass The Bechdel Test? No, but no character in this movie talks about anything other than love, sex and dating really. It’s about that. It’s even-handed. Also, while I understand the purpose of The Bechdel Test, just because a movie does or does not pass it does not necessarily make the movie good or bad. Just my opinion; take it for what it’s worth. How to Be Single won’t be the type of movie that makes it on a top ten list but for a February movie, it’s really good and something I could easily see myself revisiting when it comes out digitally.
Posted by Patrick Bromley at 12:00 PM