Between 1942 and 1950, Walt Disney Animation Studios made a handful of films that are still the strangest ever to be created by the company.

By 1942, Walt Disney had conquered both short-form animation with his Mickey, Donald, and Goofy cartoons, and the long-form animated film with Snow White and the Seven Dwarfs, Pinocchio, Fantasia, Dumbo, and Bambi. His next classic film would be Cinderella in 1950, but between these films is a fertile period of experimentation dictated by necessity that yielded six very divisive anthology films.

First, a bit of history: 1941 had seen nearly 200 of Walt’s animators go on strike, citing unfair working conditions. With the United States’ involvement in World War II, Walt Disney’s animation department was facing more trouble under the threat of serious budget cuts. Box office returns were also down, and though we now laud the artistic merit of Fantasia, it was not the financial success the company needed. As a result, Walt Disney Animation Studios was very nearly shuttered in the early 1940s. Luckily (or not, depending on your perspective), a partnership with the US government yielded wartime propaganda opportunities, which kick-started the creation of those six package films throughout the rest of the decade. These six movies are almost like Disney secrets; unlike so many of the films before and after them, they never got theatrically re-released. Their home video versions came sporadically and with little fanfare, and the films saw themselves being chopped up for spare parts for other projects over the years, rather than attaining fame on their own. Still, they represent some of the most unusual, fantastic, and outright strange work from the studio that defined feature film animation. 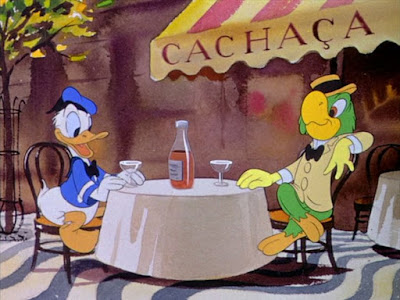 For various political reasons, Walt Disney was chosen in 1941 to be an ambassador for The United States to Latin America as part of the “Good Neighbor Policy.” He was flown to various cities across Central and South America where he hobnobbed with celebrities and royalty, was wined, dined, and shown the culture of each location. The first product of this ambassador role was the travelogue film Saludos Amigos, which consists of four segments each highlighting a different Latin American country. We see Donald Duck visiting Lake Titicaca (tee hee), between Peru and Bolivia. We then meet a Chilean prop plane named Pedro as he delivers mail at great risk to his personal safety. This is followed by a segment called El Gaucho Goofy, which features the character learning how to be a cowboy in Argentina. Lastly, we are introduced to Brazilian parrot Jose Carioca as he teaches Donald Duck the ins and outs of Latin American dance and fiesta. While the film occasionally drags, there’s some genuinely stunning animation, unusual characterization, and an overall good-time atmosphere to the whole film. The documentary Walt and El Grupo documents Disney’s trip in its entirety, as well as the creation and reception (which was mostly negative) of Saludos Amigos. In the end, this wasn’t really what anyone wanted from Walt Disney Animation, but it now exists as an oddity resulting from a very peculiar partnership and is worth seeing. 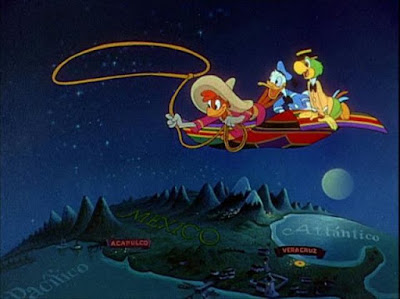 Stemming from the same goodwill trip to Latin America that led to the creation of Saludos Amigos, Donald Duck, Jose Carioca, and a new character, Panchito Pistoles (a pistol-toting stereotype if there ever was one) are the titular three caballeros. This anthology film starts with a segment about a penguin named Pablo who leaves the South Pole for more tropical climate. It’s narrated by Sterling Holloway, the voice of Winnie the Pooh. The second segment is a more mythical tale, following the fantasy adventure of a boy and his winged donkey. The next segment is another festive, dancing story with Donald Duck having a night out with Aurora Miranda, sister of Carmen Miranda, the lady who danced around with fruit on her head. The final segment has Mexican kids reenacting the Christian nativity scene and then hitting piñatas in celebration. No wonder this movie has been buried. This film seems more embraced by Disney the corporation, and the Three Caballeros themselves have recently been worked into EPCOT’s Gran Fiesta Tour in the Mexico Pavilion. It seems the Three Caballeros have more marketing power than most of their other package film brethren. Also, the theme song to this movie is impossible to get out of your head once you’ve heard it. 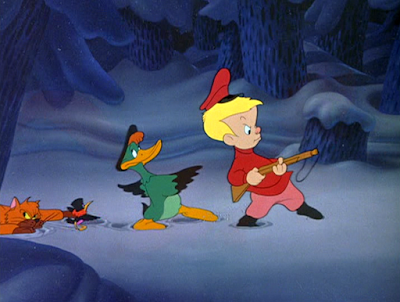 This is a music-themed anthology film comprised of ten individual segments. I’ll only hit the highlights, but I gotta confess my love for these musical package films. The first segment of this anthology is a vague retelling of the story of the Hatfields and the McCoys, two feuding families in the late 1800s who basically killed each other. This is a divisive segment because of the cartoon violence, and so it has been deemed too controversial for us Americans, who never got the unedited segment on home video (other parts of the world did). Next up is Blue Bayou, intended for Fantasia, in which two birds dance on the water using the same graceful animation that made Fantasia so beautiful to look at. Casey at Bat is an incredibly popular short that’s been bastardized for inclusion on various other compilations and was seen often on The Disney Channel. It tells the story of an over-confident baseball player and his famous trip to home plate. Peter and the Wolf is another incredibly popular short that’s been added to a bunch of other compilations. But my own personal favorite is the short that closes the film, The Whale Who Wanted to Sing at the Met. It’s about a vocally gifted whale who wants to perform at the Metropolitan Opera. It’s funny, sweet, and it goes really, really dark. 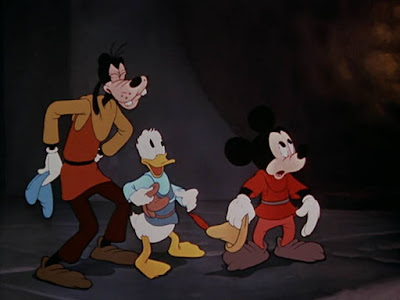 Side note: between Make Mine Music and 1947’s Fun and Fancy Free, Disney produced Song of the South. It’s not really a package film, so there’s no need for me to elaborate, other than to point out that THIS is when that movie happened. Besides, JB’s got you covered. Fun and Fancy Free thankfully finds the studio venturing back into safer, less controversial waters and much closer to the classic fare of their earlier years. We start with Bongo, the first of two segments in this package film. Bongo is an escaped circus bear looking for freedom in the wild. It’s narrated by Dinah Shore, and Bongo feels cut from the same cloth as characters like Dumbo and Bambi. Bongo has been largely forgotten, but there are folks who still love Bongo, and he sometimes still pops up in really unusual places (like the DTV Aladdin sequel Return of Jafar). The second and last segment in Fun and Fancy Free is Mickey and the Beanstalk. I have to imagine this is one of the most popular Mickey cartoons of all time, and one that seems to have had the longest life outside of the package film it debuted within. It’s the story of Jack and the Beanstalk, but with Mickey, Donald, and Goofy in the heroic roles defying the giant. It’s really great, guys. It’s also the last time Walt Disney provided the voice for Mickey. Single tear. 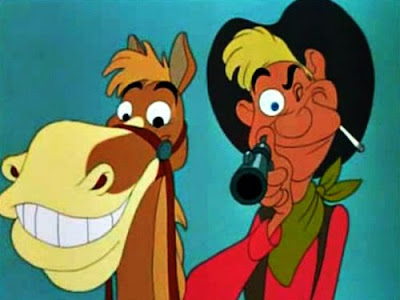 Melody Time is the sibling of Make Mine Music and follows a nearly identical trajectory: seven segments, usually about myth or folklore, tied together by a theme of music. We get another segment that was proposed for Fantasia with the jazzy, swinging Bumble Boogie. Later, Little Toot tells the story of a tugboat that wants to be like his big and strong father, accompanied by the soothing tones of The Andrews Sisters. Wikipedia tells me that The Andrews Sisters never took part in a movie again. As Bing Crosby would sing, “bum-bah-bum-bah-bummer.” Most memorable are two segments about American icons in the form of The Legend of Johnny Appleseed and Pecos Bill. Johnny Appleseed was a real guy who wandered the Midwest planting apple trees during the late 1700s and early 1800s. Pecos Bill probably never really existed, but he’s a huge part of the myth of the American West. Both segments have gained notoriety on their own outside of the package film itself, appearing on various patriotic video tapes and DVDs over the years. Like Make Mine Music, this one has been edited for Americans to take out all references to Pecos Bill smoking (because it’s a well-known fact that Americans don’t, and never have, smoked cigarettes). Those of you lucky enough to be in Europe have received no such censorship. In 1995, Disney took another crack at the story by hiring Patrick Swayze to play Pecos Bill in the live action film Tall Tale. It bombed. 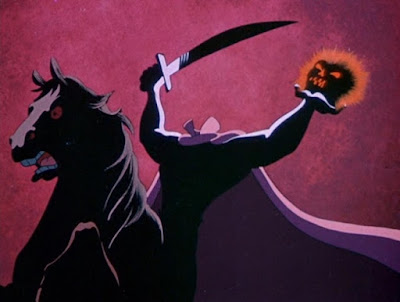 This is it! The final bonkers Disney animated anthology film from the 1940s. And it’s a good one, too. Like Fun and Fancy Free, we only get two stories this time, but they’re memorable. First up is The Wind in the Willows and is based on the classic children’s book in which Mr. J. Thaddeus Toad, Esquire, Edwardian Frog about town and thrillseeker extraordinaire, desperately tries to get a motor car. This beloved timeless classic for all ages features bankruptcy, grand theft auto, a lengthy courtroom scene, and imprisonment in the Tower of London. This is also the movie that inspired Mr. Toad’s Wild Ride, the Disneyland attraction that actually takes you TO HELL. The back half of the film is the story of The Legend of Sleepy Hollow, and is my favorite of the two. I’ve written before about how I appreciate this film and its refusal to back down from the scarier side of the story, but let me reiterate it here again. Headless horseman? Check. Late night ride in the spooky woods of rural New York State? Check. Flaming pumpkin hurled directly at the audience, comprised largely of children? Check. Ambiguous ending? Check. I LOVE the balls on this segment and I applaud the overall bizarre nature of this package film, because there just ain’t nothing else like it. Thankfully, there’s a Blu-ray on the market that contains both The Adventures of Ichabod and Mr. Toad and Fun and Fancy Free. Also included in the package is The Reluctant Dragon, another early oddity from Walt Disney Animation Studios, produced in 1941, and considered by some to be the very first Disney anthology film and a part of the cycle I’m spotlighting here.

And that’s the end. After The Adventures of Ichabod and Mr. Toad, the studio rediscovered its footing and cranked out one classic after another, becoming a staple of family entertainment for decades to come. I contend that there is no decade as important to Disney as the fifties. I mean, they not only changed pop culture during the decade, but they also shaped it. Patrick recently wrote about Treasure Island, the company’s first completely live-action feature film, which started the golden age with a bang. Davy Crockett, Peter Pan, DISNEYLAND…all that came in the fifties. But these movies from the forties linger on in the rearview, forgotten and sometimes deliberately suppressed. None of these films are -- or likely ever will be -- considered Disney classics, but I love them for being so unusual and outside of the traditional expectations that usually surround the brand. Flawed as the day is long, they’re still full of neat little beats and snapshots of a time when the world was a very different place. This is not Disney promoting family values, princesses, and fairy tale endings. This is Disney drinking and smoking, going to late night parties, telling creepy stories around a campfire, and trying (and failing) to embrace the world around it. This is perhaps Disney at its most flawed, but if you ask me, it’s also Disney at its most interesting.
Posted by Patrick Bromley at 5:00 AM