Before Sunrise, Love and Being the Hero of Your Own Story 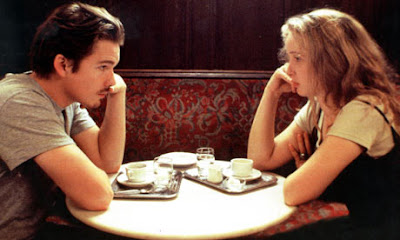 It’s been a very weird week for me.

I once heard (I forget where) that good writers should sometimes write something so personal that they’re almost embarrassed for people to read it. I’ve been thinking about that a lot in reference to my writing at F This Movie!. Week in and week out I write reviews and columns and, to be honest, the reviews I take very seriously but the Riske Business columns I see as more writing for fun. Then a week or so ago, something stirred in me. While I still want to write those “light” columns every other week, I want to use the time now to also write something more reflective in the off weeks from a Riske Business column.

So I want to take the opportunity to use this column as a re-introduction. What I mean is every other week you’re going to get a film and personal essay. There are movies I want to introduce you all to that have greatly moved me in life and I want to tell you about them (sometimes they’ll be more mainstream and other times more obscure). Secondly, I want to use those movies as a springboard to talk about “real shit” like depression, pressing the re-set button on your life, community, roles in the business world or our connection to artists as consumers and appreciators, just to name a few. Those will be subjects in future columns.

Today, I want to discuss Richard Linklater’s sublime Before Sunrise, romantic roles and becoming the hero of your own life. I hope you can appreciate this new approach; if not, there’s always going to be the Riske Business columns every other week. Consider that a brand for a fun and light read. The film essays are the ones I have to write when I have something more personal on my mind or need to get something off my chest. 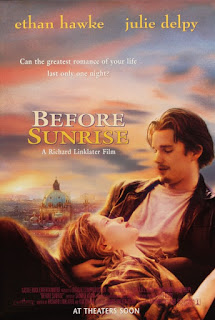 Anyways, let’s talk about Before Sunrise. The first in the trilogy of a modern-day romance is still my favorite for myriad reasons. The most important is that it’s the most hopeful of the bunch to me. The second most important is that it’s the place in which I currently find myself.vMy personal romantic life over the past few years has been more akin to Before Sunset (lost opportunity as I see a parade of my personal exes getting married and starting families) but now I find myself at a different place interestingly enough. Let me back up and explain. I made a choice this week spontaneously that sort of rocked me to my foundations. I decided to look up my ex-girlfriend (we’ll call her Tanya) on Facebook and see what she was up to. She was the big one. THE ex. This was something I told myself I would never do and for years I didn’t. I told myself that any new information I had about her (whether she was dead or happily married) would hurt me so it’s better to know just what I know and move on. The trouble is, I have been having a bitch of a time moving on from that experience (I still date but the experiences usually seem “off”) and I think part of the reason was because I allowed myself that uncertainty of where she ended up. I made Tanya into a monster living rent-free in my brain. She was the Voldemort (or maybe a dementor) of my romantic relationships. It’s one of the reasons why when Jemaine Clement references “The Beast” in What We Do in the Shadows, it’s so funny to me – because I 100% understand where he’s coming from. Not knowing was becoming worse than knowing.

What I learned was that Tanya got married to the guy she left me for and has three kids with him now. Seeing her Facebook page was strange – heartbreaking and liberating at the same time. I was sad because I saw a snapshot of what could have been. But it’s someone else’s life and not mine. It was liberating because I realized that her situation was meant to be and my imagined construct of a life with Tanya was not. It’s what Ethan Hawke in Before Sunrise calls a “romantic projection,” i.e. something viewed in rose-colored glasses and not based on any kind of reality. Tanya’s current husband was the romantic lead of their story and I was the other guy. I was the Greg Kinnear in You’ve Got Mail of this situation. And that realization was pure magic to me. It was uplifting because now I know that scenario was fucked (he wasn’t the wrong guy, I was) and I can be the Tom Hanks of my life to a different Meg Ryan. I can be the romantic hero of a different story. I think that’s why, since Tanya, I’m so in the bag for romantic movies. I’m jealous of people falling in love and the movies have been the thing that is filling out that corner of my life while I healed from my wounds. It’s gotten to the point where besides horror, “relationship movies” are my favorite type of movies. 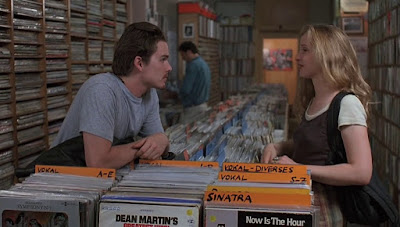 There’s a great sequence (to be fair, they’re all great sequences) in Before Sunrise where Ethan Hawke is playing pinball with Julie Delpy and they’re talking about his ex. He says this and it sums up everything perfectly:


"You know what's the worst thing about somebody breaking up with you? It's when you remember how little you thought about the people you broke up with and you realize that is how little they're thinking of you. You know, you'd like to think you're both in all this pain but they're just like "Hey, I'm glad you're gone."

The funny thing is I should have always known Tanya was the wrong one for me. She was a girl that I once showed Before Sunrise to and she hated it. She complained the whole time and eventually I just turned it off. If you watch that movie with someone you love it should be a dream but watching it with Tanya just felt unseemly. Note to my readers: If you are dating someone and they don’t like Before Sunrise when you watch it with them (and you do), break up with that person. It’s become my only deal breaker movie when it comes to relationships. I think finally looking up Tanya this week was meant to be. Earlier in the week I was thinking about taking a vacation on the EuroRail (like in Before Sunrise), then thought of watching Before Sunrise again because of that and then thought of Tanya because of my horrible experience of watching it with her. It’s funny when you love movies how they weave themselves into your life and experiences and they help inform each other. Before Sunrise is practically in my DNA. It’s more than just a movie to me. 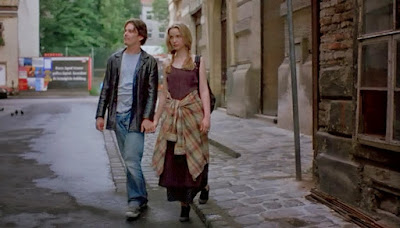 I love “walking and talking” movies like Before Sunrise. I wish that filmmakers had the ability and opportunity to make them just as much as tent poles. Before Sunrise is a perfect depiction of what I like to call a stolen day, which means you steal time from the responsibilities of your life and just go exploring. This is what Jesse (Ethan Hawke) and Celine (Julie Delpy) are doing in their day in Vienna. On this day, nothing else in the world exists except these two people. I’ve had my own stolen day, not with a woman, but by myself on a business trip when I took an extra day and found myself in the beach town of Asbury Park, NJ (where Bruce Springsteen got his start). Walking down the boardwalk and just having a day to reflect and discover new things was one of the most memorable days of my entire life. It’s the type of thing you can’t plan for and I hope everyone has had a day like this. If you haven’t, maybe take a vacation and set one day aside to not have a plan and just go exploring.

Before Sunrise is a movie full of great moments, not scenes specifically, just moments. For example, Jesse and Celine are talking and Jesse almost caresses Celine’s hair but then pulls his hand away – that gets me. Or when they go to the record store and there’s a listening booth and both smirk as the song starts playing because they’re embarrassed to be listening to that particular song together. It’s amazing because it’s so true. It’s funny how we can listen to music on our own that we find deeply moving but to listen to it with someone else (particularly a stranger) is almost too exposed so we protectively take the piss out of it by smirking. Another is when Jesse is at the bar bargaining with the bartender to give him a bottle of red wine for him and Celine. That scene always moves me because it’s a man in the state of heightened emotion asking for a favor. This moment means the world to Jesse but it’s just another day for the bartender and yet the bartender recognizes Jesse’s current state and is sympathetic to his situation. G-d, is this a great movie.

I mentioned at the top that this has been a very weird week for me. It’s because I feel like the light went off in my brain and I’m finally thinking with clarity for the first time in years. That sad cloud that hovered over me is gone (p.s. a fortune teller once told me that I had a dark cloud hanging over me and I took it to heart…my point being never go to a fortune teller) and I’m excited about everything now. Before Sunrise is the right movie for me right now because it’s a movie about how anything can happen anywhere and that life is full of adventure and surprises. Who knows? Maybe when I go on my EuroRail trip I’ll even meet a cute French girl on the train.