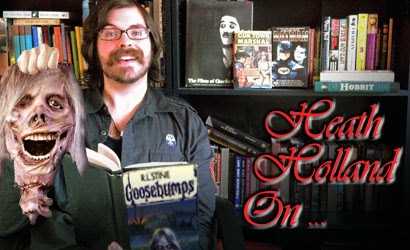 Here’s a list of Disney scares. No, Escape from Tomorrow doesn’t count.

From the very beginning, Walt Disney had an appreciation for a good scare. You only have to watch the shorts and movies that he produced to see that he believed in showing that the light and good didn’t mean much without the threat of the dark and evil. Here are ten Disney movies or scenes from Disney movies that you can watch with your whole family on a dark and windy night this Scary Movie Month.

10. The Nightmare Before Christmas

This stop-motion Henry Selick film was the brainchild of Tim Burton, a filmmaker that I think still has more hits than misses (though just barely), and it embraces the child-like fascination of Halloween and the anticipation that occurs in all of us this time of year. It has some very catchy songs and wonderfully memorable imagery. It’s a dark film—but in a safe way—and has been a staple in the fall viewing schedule of adults and kids for over twenty years. So why is it slumming at the bottom of this list, you ask? The Nightmare Before Christmas is a fun movie that lived happily as a mid-grade film that people watched and liked, but in the last few years has become SERIOUSLY over-exposed due to its popularity with the Hot Topic crowd, who treat it like Lawrence of Arabia. Take it easy and stop cutting yourself. 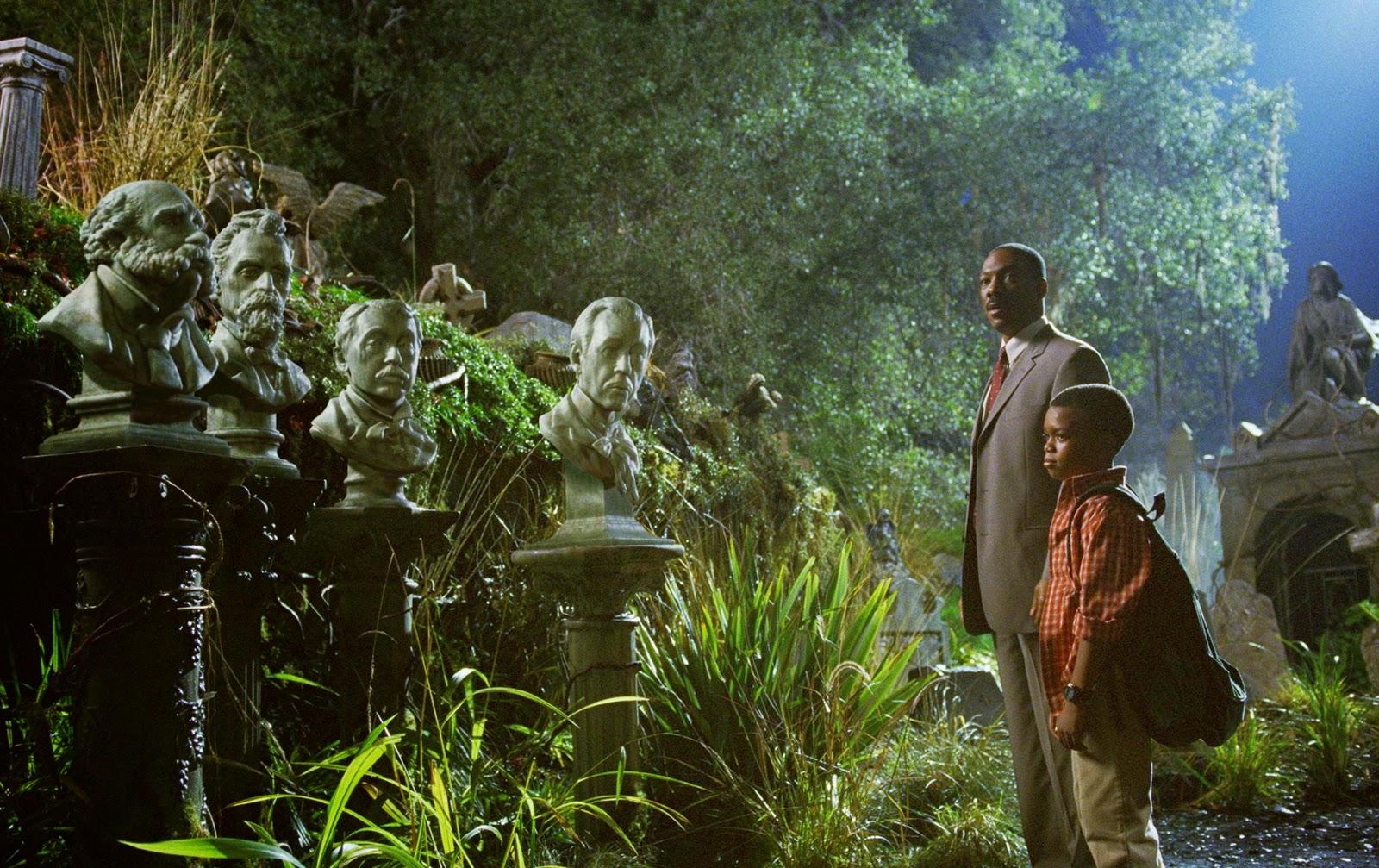 Guillermo Del Toro has been quietly working on his own film adaptation of the famous Disneyland and Disney World ride for several years now, and (I think) his take is one that I’d really like to see. In the meantime, we’re stuck with this 2003 Eddie Murphy vehicle. I don’t think the movie is half bad…it’s only about 49 percent bad. It’s really easy to pick on because it really is low-hanging fruit, but filmmaker Rob Minkoff was one of two men who directed on The Lion King, so it’s not like he came from music videos and McDonald’s commercials. The movie has a pretty watchable supporting cast for a family-friendly (read: kids movie) project, including Wallace Shawn, Jennifer Tilly, and Terrance Stamp, who seems to have joined Malcolm McDowell in never refusing an offer to appear in something. It’s short, it’s harmless, and it will have to do until Del Toro gets his own version off the ground or until you’re next trip to Disneyland.

Hocus Pocus is about a group of kids who accidentally summon real-life witches from the 1600s to their modern town. Hilarity ensues in the form of Bette Middler, Sarah Jessica Parker, and that lady from Sister Act as they do what they do in a modern (well, ‘90s) setting. This is another movie that has been discovered by a new generation and reevaluated as a cult classic in recent years, but I’m way softer on this one than I am Nightmare Before Christmas because, as far as I know, Hocus Pocus fans don’t gather outside of bookstores at night and talk about how much their parents hate them. I also, despite the cast, don’t think Hocus Pocus is appreciated by the Beaches fan community OR the Sex and the City fan community, which is a real shame.

I’m pretty sure Disney made this movie solely so that they could sell it on DVD in the gift shop of the Tower of Terror ride. The fact that it’s a semi-decent film is icing on the cake. Directed by successful children’s author D.J. McHale, 1997’s Tower of Terror recounts the story of a group of guests at the Hollywood Tower Hotel. One stormy night (uh-huh) the guests get stuck in the elevator on the 11th floor; lightning strikes the hotel, the elevator drops, and the guests vanish. Sixty years later Kirsten Dunst and STEVE GUTTENBERG arrive to investigate the vanishing, striving to put right what once went wrong, and hoping their next leap will be the leap home. No, wait, that’s Quantum Leap. Close enough. Kids will likely eat this one up, especially if they’re fans of Cocoon or The Virgin Suicides.

I really love The Black Cauldron, even though I recognize it for the mess that it is. This one gets filed in the “what were they thinking” category and is a testament to how popular fantasy and sword-and-sorcery had become in the early-to-mid 1980s, as well as how lost the animation division of the House of Mouse was during those same years. Based on a book series by Lloyd Alexander, The Black Cauldron is yet another version of William Campbell’s “Heroes Journey” pattern, but the presence of witchcraft, necromancy, and a bad guy who looks like a walking skeleton might give kids more nightmares than Star Wars ever did. Yeah, I wasn’t allowed to watch this movie when I was a kid. It’s really not that bad and now seems pretty tame, but it was controversial when it was released. It’s probably Tim Burton’s fault; he was an animator on this film, marking his second and final appearance on this list (no Frankenweenie here, thank you). Warning: The Black Cauldron turns 30 years old next summer. Prepare yourself for the marketing blitz.

5. Something Wicked This Way Comes

Disney does creepy carnival horror! Based on the Ray Bradbury novel, Something Wicked This Way Comes kicks off with two kids witnessing a mysterious stranger named Mr. Dark (Jonathan Pryce), the Illustrated Man and his apparent magical abilities. An evil plot involving stealing souls soon emerges, and when Jason Robards and Pam Grier show up, it’s evident that this is one of the most unconventional Disney films of all time. The film was a big-time bomb and has seemingly dropped off the face of the earth, but Disney did put it out on DVD a decade ago, so it’s just waiting for you to discover it. 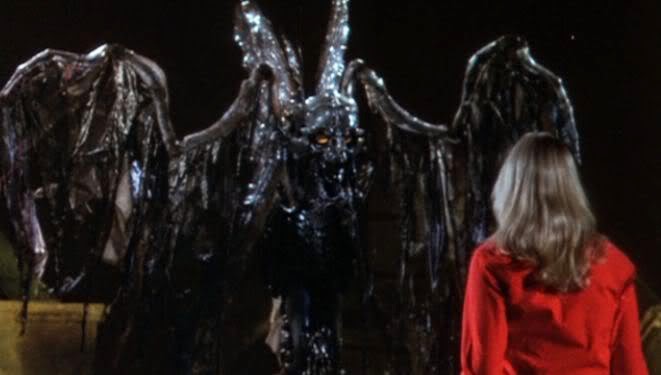 If you’ve always thought that Disney family entertainment is synonymous with missing children, séances, and possession, Watcher in the Woods is just the film for you! The plot concerns a family who has moved into an English manor and the mystery of a child who vanished thirty years prior. The film incorporates a variety of different genres as the mystery unfolds. What makes it even more interesting is that the movie was filmed, edited, completed, and was in a wide theatrical run when Disney pulled it from all cinemas so that they could tinker with it some more. The final film was re-released to theaters in 1981 with a new ending, and the DVD release has three other alternate endings that were created but not used.

3. The Finale of Sleeping Beauty

In Disney’s 1953 classic, Princess Aurora is cursed by the evil sorceress Maleficent and is doomed to sleep forever unless kissed by her true love. Much of the movie is typical Disney family entertainment; there’s music and singing and fat little fairies, true love and campy comedy. But then there’s also a terrifying black dragon that breathes fire and causes massive destruction. Forget that the recent film Maleficent tries to rewrite history; Maleficent, as depicted in Sleeping Beauty, is one of our great baddies. Still not convinced? When the prince confronts her for the climactic battle, she tells him “Now you shall deal with me, O prince, and all the powers of HELL!” That’s right. She totally called up the very forces of hell in a Disney cartoon from 1959. The prosecution rests.

2. The Adventures of Ichabod and Mr. Toad

Unless you have a deep fear of toads, rats, or moles, most of the creeps from this movie come during second half, which recounts Washington Irving’s story of the headless horseman and his haunting of Sleepy Hollow. Pretty much everyone knows the tale, and Disney’s version doesn’t disappoint. In that classic and inimitable style, the spooky story of Ichabod Crane and his final fateful ride are given a lavish treatment that, bravely, doesn’t change the ending of the story and doesn’t sugar coat anything for the kids. What’s more impressive to me is that Disney could have reversed the order of the stories and had the Wind in the Willows segment play last in order to give kids a break and leave the theater with dry pants, but that’s not what they chose. I applaud their decision.

1. The “Night on Bald Mountain” sequence from Fantasia 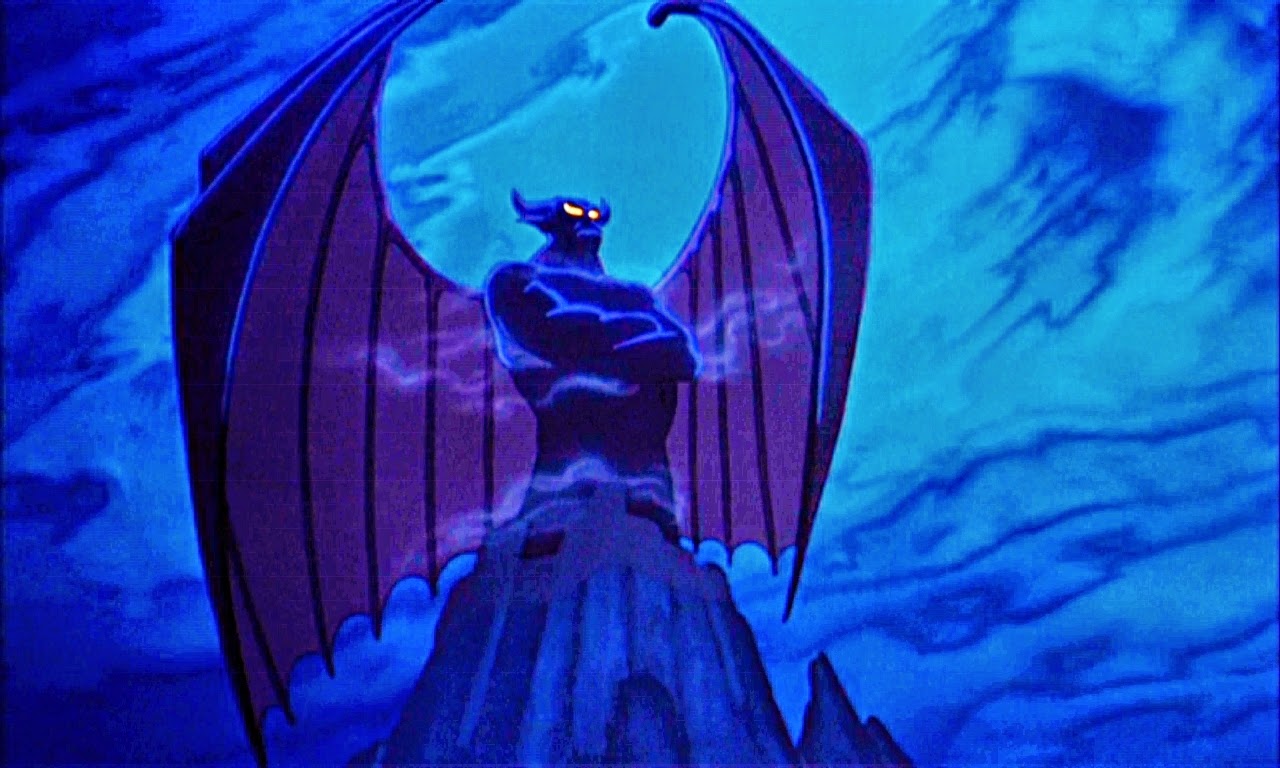 The finale of the 1940 film Fantasia couldn’t be any more epic. After watching ballet, flowers, the seasons, and even Mickey in “The Sorcerer’s Apprentice” segment, the film concludes with the Slavic deity Chernabog (the name translates literally to “black god”) attempting to take control of the world by summoning all the evil spirits in the earth to rise forth. The music from Modest Mussorgsky (no relation to Modest Mouse) coupled with the imagery on screen is the scariest thing Disney ever committed to film. Chernabog is humongous, and his glowing yellow eyes are terrifying. Even worse, the sequence goes on for over TEN MINUTES. I have to imagine that this scene has been giving kids nightmares for over 70 years. Sure, good does eventually overpower the evil, but it’s hard to forget what you’ve just seen.

Do you have a favorite Disney scare? One that I missed, or maybe just a moment from a Disney movie that always gave you the creeps? Shout it out in the comments below!
Posted by Patrick Bromley at 12:00 PM