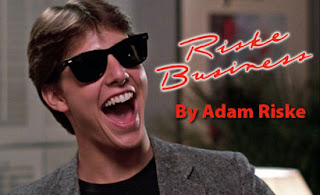 I missed Hocus Pocus in its original July 1993 release. Back then I thought it was a “girl movie.” Boy, was I a stupid 11-year old!

I finally caught up with Pocus in 1997. It aired one chilly October night on the Disney Channel and I had it on as background noise while I was studying for a math test. Ten minutes into the movie, I stopped studying. Pocus had me. I was a goner. I flunked the hell out of that test. I didn’t care. I found a perennial favorite to watch every Halloween. I know I made the right decision, because I’m not writing a column about math 16 years later. 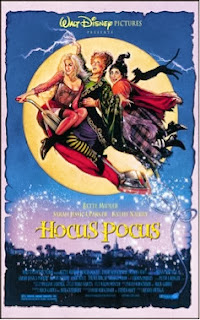 What is it about this movie? It’s not good in a traditional sense. It barely has a story (it has a plot, but that’s a big difference), the characters are undeveloped after the first act and the lead performances by Bette Midler, Kathy Najimy and Sarah Jessica Parker (as the witchly trio of Winifred, Mary and Sarah Sanderson) are just a shade shy of embarrassingly broad. So why am I watching this movie every year whenever autumn rolls around? It’s because Hocus Pocus is Halloween! No other movie represents this, my favorite holiday and time of year, better than Hocus Pocus. It’s shorthand like Count Chocula, Svengoolie or those seasonal Halloween City stores. Watching Hocus Pocus is like taking a vacation to Halloweentown. And who doesn’t want to hang out there every October? 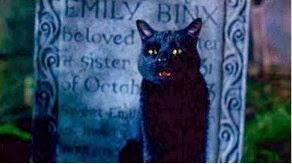 I can watch the Pocus at any time because it is just pure, uncomplicated fun. Every once in a while it’s good to have that. As much as I like wearing my serious pants in the fall, I’m not going to see Prisoners over and over again (that movie is good, btw). Also on the upside, there’s no Goonies derivation to be had with Hoke Poke. It’s just as entertaining to me as an adult as it was when I was 15 and already too old for it. But I was a weird teenager until I became handsome at 16. All of my friends from my old elementary school and junior high gang (Karate Blood) went to either a different high school or were on drugs and/or always in trouble. Like Don Corleone, I was a square and wanted nothing to do with drugs, so we gradually parted ways. Being in between groups of friends, I had a lot of time on my hands. I think there’s another reason I like , so much. It feels like comfort food. It’s safe but reminds me of a simpler time when I felt very alone and yet knew I was doing the right thing. Just like Mookie.


Not everyone has my history, though so what is it about this movie? How did Hocus Pocus become a seasonal classic, beloved by so many? I’m going to venture a few guesses. The first is that it’s horror-lite, not unlike the Universal Monster movies we’ve all grown up with. Ho Po could be that bridge movie for many kids before they get into horror. In fact, did you know that if you take an editing program and cut out all of the violence, disturbing imagery, foul language and Meg Foster nudity from The Lords of Salem that you are left with an unedited cut of Hocus Pocus? Surprised you didn’t know that. All of the internet cafes are buzzing about it. You should hang out at internet cafes, Netscape Navigator! 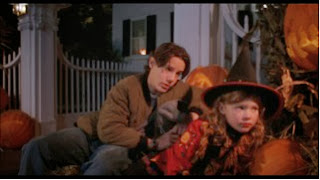 Another reason the movie is so easy to watch is because it’s very well put together. Director Kenny Ortega and Editor Peter E. Berger do an effective job of keeping the movie always on the go. Outside of the post-opening credits flashback to 1693 Salem there are hardly any lulls. Pocus is also great to look at. The cinematography, art direction and makeup are all top notch. The score by John Debney is also memorable. 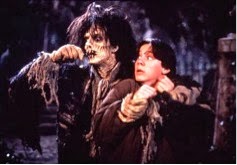 The characters are pleasant to hang out with -- Max Dennison (Omri Katz), Alison (Vinessa Shaw), Dani (Thora Birch, a hurricane of Disney spirit in this movie), the cat Thackerry Binx (voiced by Sean Murray) & zombie Billy Butcherson (Doug Jones) -- and I think a lot of that has to do with the filmmakers wisely tapping into the desire for mischief that kids often feel on Halloween, especially if they are too old to trick-r-treat. You want to get into something spooky, like making your own horror movie in a creepy field or messing around by that old weird house in the neighborhood that looks abandoned. It’s the one day of the year where you want your neighborhood to go a little Blue Velvet on you. You want a bit of danger, but safe danger (sanger). Pocus is totes sanger. 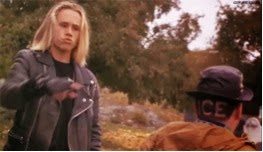 And boy is this movie quotable. I know I have dropped the following repeatables in my day: a) “Away! Away, Beast!” b) “This is ICE!” c) “Dump out your sack!” d) “Max likes your yabos. In fact, he loves them.” e) "Otherwise it’s curtains!" f) "Damn, damn, double damn! Broom ho!" g) "Bubble, bubble. I’m in trouble." h) "You’re the ugliest thing that’s ever lived and YOU KNOW IT!" and (my personal favorite) i) “There’s a power greater than your magic and that’s knowledge.” The script is kind of terrible.

But I think the one thing that most people like about this movie is how crazy weird it is. For a Disney kids movie, there’s stuff going on in Pocus that’s just nuts. It kills kids from the 1600s (or at least sucks the youth out of them and threatens to eat others). The bullies (who want pot at the beginning of the movie) are actually kind of threatening, even though they’re supposed to be comic relief. As mentioned before, Thora Birch’s character calls breasts yabos (and she totally shows them in American Beauty. Wes Bentley likes her yabos. In fact, he loves them).  There’s a horny bus driver. Real-life brother and sister Gary and Penny Marshall play husband and wife. And finally, the movie is completely pro-sex. There is nothing worse in Pocus’ Salem, Massachusetts setting than being a virgin. It doesn’t matter if you’re 15 years old. You should be doin’ it and doin’ it and doin’ it well. Again, this is a family movie from Disney. 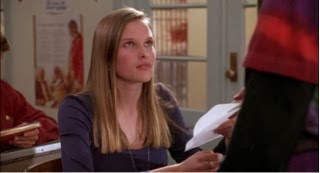 Let’s talk about this virgin thing for a second. All of the action (pun intended) is set into motion because Max is a virgin, and only virgins can summon the witches by lighting the black flame candle on Halloween night. This is great news for many viewers who no longer have this virgin handicap and can thus sneer at Max. I remember after my first time when I whispered into my lady’s ear “We’ll never have to worry about summoning witches anymore.” It was romance. But I can’t make fun of Max too much because he does ‘the move’ on Alison at the beginning of the movie. You remember 'the move,' right? He gets up in front of his entire class and asks her out (“If Jimi Hendrix shows up, here’s my number”). That takes balls. Jacob Bailey High School is still talking about ‘the move’ 20 years later (they call it ‘the Dennison’). I know this for a fact because I just made it up. Did you ever try calling Max’s number like I just did? I didn’t have any luck. Tell him Jimi Hendrix showed up if he answers.

For those reasons alone, people come back to the Hoke each year during the month of October. Hell, I even knew a girl who named her cat after the cat in this movie. And she specifically bought a black cat so she could do that. This movie is influential is what I’m saying. It’s sort of a miracle that it’s taken the place in so many kids’ (some who are now adults) collective memories. Do we just want to see Max’s hackey sack backpack? Or wonder why he plays the same notes over and over when he’s drumming his pain away in his bedroom? And how about that bedroom! It’s two freaking stories! BTW...did you know that Leonardo DiCaprio was originally supposed to play Max but instead chose to do What’s Eating Gilbert Grape? This paved the way for Omri Katz to have one hell of a 1993 in film with both PoPo and a role in Joe Dante’s excellent Matinee.

With Scary Movie Month coming up soon, what are some other non-horror Halloween movies that are good to watch as we run up to October 1st?  ParaNorman? Monster House?  Also, leave a comment below with your thoughts on Hocus Pocus and, if you’re a fan, why is it one of your seasonal favorites?
Posted by Patrick Bromley at 11:44 AM