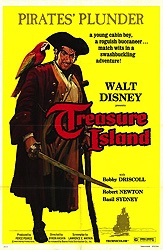 How we see a movie matters. This is a concept being lost in the digital age, when movies are being viewed on tablets and phones and in 10 minute increments while doing three other things. I say this not because you kids are on my lawn and I would like you to please move -- I'm guilty of seeing movies the same way -- but because little attention is paid to presentation anymore. The ever-growing amount of available content and the ease of access have led us all to place quantity over quality: we want to watch as much as possible in whatever way we can instead of worrying about how we see it.

But presentation does matter, and it's not just about watching something digitally versus seeing it theatrically. Sometimes we're forced to do the best with what we've got and it's still not enough. Had I seen Disney's live-action adaptation of Robert Louis Stevenson's Treasure Island on a VHS tape back in 1993, I'm not sure I would have had the same reaction I had viewing it for the first time on Blu-ray (available only as an exclusive through the Disney Movie Club, of which, having fulfilled my obligation, I am no longer a member). While my enjoyment of the film had a lot to do with the classic story, the sweep of the production and the performance of Robert Newton, it was also due in large part to just how gorgeous it looks in HD. I'm a sucker for that old-school Technicolor look, and the colors on the Blu-ray of Treasure Island are so great to look at that I fell in love with the film. I'm glad I saw it when I did and in the way I saw it. 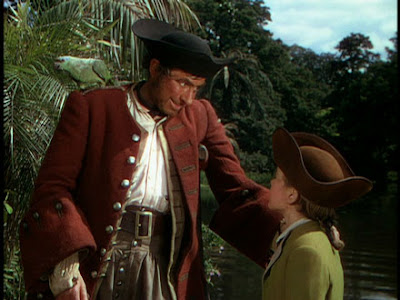 I'm guessing you know the story of Treasure Island, but here goes if you don't: in late 1700s England, young Jim Hawkins (Bobby Discroll) is given a treasure map by the drunkard Captain Bones, who dies thereafter. Hawkins shows the map to Squire Trelawney (Walter Fitzgerald), who recognizes it as leading to the treasure of the pirate Captain Flint. He organizes a crew to sail in search of the riches, bringing Hawkins along as cabin boy and one-legged innkeeper Long John Silver (Newton) as the ship's cook. Once at sea, Silver is revealed to be a pirate and the ship's crew the former crew of Captain Flint. They mutiny, leading to a race to the island with all of Flint's treasure at stake.

Treasure Island is more fun than I could have imagined -- and old-school grand adventure with oversized performances, real location shooting, real ships and everything. While action photography has come a long way since 1950, director Byron Haskin (who would go on to make the great War of the Worlds and the less-great-but-still-good Robinson Crusoe on Mars) infuses the movie with tons of energy and vitality. The swashbuckling never quite reaches the heights of Michael Curtiz' The Adventures of Robin Hood, but that's a high bar to set as far as classic adventure films are concerned. It's only too bad that the movie was shot in the then-standard 1.33:1 Academy aspect ratio; it would have benefitted from opening up on the sides to showcase the vastness of the ocean and the ships against the horizon. Even still, Haskin has directed a movie that captures a lot of that feel without ever really being able to show it.

I'd love to say that Robert Newton is the whole show when it comes to Treasure Island, because he is a ton of fun to watch as he limps and squints and "arrrghs" and double-crosses his way through the story, at one point making me laugh out loud as he curses his lack of 10 toes during a chase. There's a reason he would continue to play Long John Silver once more on film and again for television (as well as a stint playing Blackbeard in 1952's Blackbeard the Pirate). You don't get typecast as a pirate without being great at it. 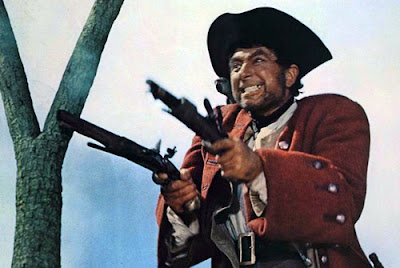 Here's something I didn't know prior to doing some background reading on this version of Treasure Island: star Robert Newton more or less invented what is widely recognized today as the "pirate voice." That alone earns the movie a spot in history, not to mention the fact that it was Disney's first fully live-action film (after a handful of movies that combined live action and animation, among them Song of the South). It was a game-changer for the studio -- evidence that they could find success making movies with human beings as much as with cartoons. While that would eventually lead to a long stretch in the '60s and '70s of dreadful live-action "family films" like Superdad, The Cat from Outer Space and The Shook-up Shopping Cart, it also helped pave the way for a number of beloved and well-deserved classics. To be honest, live-action Disney movies are a sizable hole in my movie watching. If the others are more like Treasure Island than they are Condorman, I'm in.

Over the last 100 years, more than 50 adaptations have been made of Treasure Island for both film and TV. Disney's 1950 version wasn't the first -- there were at least two made during the silent era (era) and two made in the '30s (including one in Russian). It wasn't the last, either, as it has been adapted into animated movies and Muppet movies and a 1990 version that I haven't seen but of which our own Heath Holland is a big fan. Having only sat through a few of them, I can't say how Disney's stacks up against the others. What I can say is that this is an especially well made movie in the classical tradition -- a good story, well told. When Disney is work at peak form, that's what they do best. 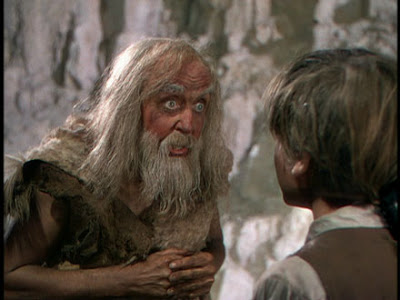 What's most shocking about seeing Treasure Island for the first time in 2016 -- besides how much I dug it -- is the realization that Disney was not fucking around when they made it. There is a scene late in the film in which a pirate throws a knife into the shoulder of a child. The child responds by shooting the pirate in the face. This is in a PG movie. A Disney movie. In 1950. I'm guilty of assuming every movie I see made between the institution of the production code in the '30s and 1960 is going to play it safe, but then Treasure Island will show some guys getting shot in the face with blood and everything and I have to remember just because movies used to be made for general audiences doesn't mean they were made just for little kids.

So what have learned? Well, A) I'm glad that Disney made the leap to live action; 2) I liked this version of Treasure Island but might not seek out all of the other 49 and D) I'm glad I accidentally waited until the Blu-ray to see it because the excellence of the transfer made a big difference. The experience has inspired me to track down more of Disney's classic live action films in the hopes that they include lots of death and murder. Surely The Parent Trap is referring to some Jigsaw shit, right?