This week we go to war, get trapped in a room with Salma Hayek and swing with the neighbors. 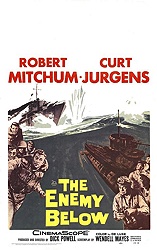 Adam Thas: The Enemy Below (1957, dir. Dick Powell) I love certain genres of movies and two of those that are on the top of my list are “old war movies” and “submarine movies”, and The Enemy Below covers both of them. The Enemy Below is a rather short movie that follows a captain of a US Destroyer (Robert Mitchum) and a German U-Boat captain (Curt Jurgens) as they are both engaged in a long battle between their two crews. I was completely wrapped up in The Enemy Below, but that is mostly because I know myself and I’ll get sucked into a shitty submarine movie. It was so nice to see the old practical effects with models and the depth-charge scenes where you can tell it’s an actual depth charge going off the back of the ship. It was interesting how they made the Nazi’s sympathetic characters in it. Only a dozen years after the actual end of World War II most of the people in the theaters would have fought the Nazis so it was interesting to show the small ways they get you to like the “enemy” in a plot that demands it. There is definitely some odd moments where you can tell they were going for nostalgic purposes in terms of dialogue and situations, pandering to the viewer, but it had a charm to it that I really loved. If you like war movies (especially old ones), you’ll like this The Enemy Below. 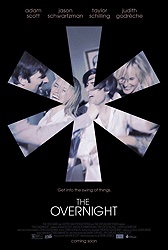 Erich Asperschlager: The Overnight (2015; dir. Patrick Brice) I first heard about this Duplass Brothers-produced indie comedy on the very funny U Talkin' U2 To Me? podcast, hosted by Comedy Bang! Bang!'s Scott Aukerman, and Parks and Rec's Adam Scott, who co-stars in the film along with Jason Schwartzman, Taylor Schilling, and Judith Godreche. Scott and Schilling play recent LA transplant parents looking to make new friends. At a child's birthday party they meet Schwartzman and Godreche, an impossibly cool couple who also have a young son and extend a friendly hand to the newcomers, inviting them over for a kids' playdate and pizza dinner. After the sleepy children are tucked away upstairs, the evening takes a turn, going from friendly get together to something stranger and more intimate. Drugs are used, boundaries expanded, taboos explored, dicks compared, all leading to a final scene that works both as emotional catharsis and parental punchline. The Overnight isn't a laugh out loud (if only there was a way to shorten that) comedy, but what it lacks in belly laughs it makes up for in character interactions and reactions that feel true. It has broad sex comedy beats, but the core of the story has a lot to say about being a parent, being a couple, and what both of those things require a person to sacrifice. I'm sure once U Talkin' U2 To Me? returns, Scott and Scott will urge listeners to check out the movie. But who knows when they'll be back ('s been a while) so I'll gladly pick up the slack by recommending The Overnight here. 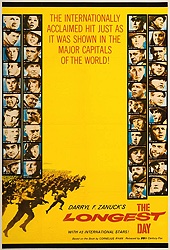 Heath Holland: The Longest Day (1962, dir. Ken Annakin, Andrew Marton, Bernhard Wicki, Steve Forrest) I've had war films on the brain lately, and in writing up my thoughts on the genre this week I realized that The Longest Day is my currently my favorite war film. It just does a lot of things awfully well: it doesn't glorify America's role in WWII and isn't saturated in jingoism, it doesn't overtly vilify Germany, it doesn't paint the war as some sanctified conflict ordained by God, and it doesn't make the soldiers into superheroes. In fact, a criticism could be leveled at this movie that it's too impersonal and focuses more on military maneuvers and the war tactics themselves rather than the reasons and motivations, but I appreciate this approach by presenting us with facts rather than emotion. This movie is also a who's who of popular actors (the poster proclaims "With 42 International Stars!"), delivering John Wayne, Henry Ford, Robert Mitchum, Sean Connery, Rod Steiger, and Jeffrey Hunter. No actor can be considered the lead, as this is truly an ensemble cast with no role really feeling more important than any other. The Longest Day is just a neat film that does things differently than many of the war movies that came before and after it. Add in stunning cinematography and jaw-dropping battle scenes and you've got a film on a whole new scale that really seems to have ushered in a new perspective on World War II. 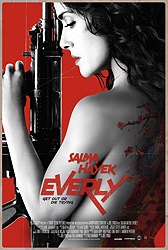 Patrick: Everly (2015, dir. Joe Lynch) It was exactly one year ago today that I reviewed Everly, the third second feature from director Joe Lynch and one of last year's most underrated offerings. Pitched as "Die Hard in a room," the movie casts Salma Hayek as a woman trapped in an apartment by yakuza gangsters for years who finally fights her way out on Christmas Eve. The movie jumps around tonally -- part dark comedy, part balls-out action movie, part horror film, part exploitation movie -- but is always assured and kinetic and feels like it's growing organically out of one filmmaker's movie-obsessed brain. I love Joe Lynch and I love this movie. It has been very rewarding to turn a number of people onto it in the last year. Hopefully this Netflix pick can turn a few more.
Posted by Patrick Bromley at 12:00 PM

Email ThisBlogThis!Share to TwitterShare to FacebookShare to Pinterest
Labels: everly, netflix instant, netflix this movie, the enemy below, the longest day, the overnight, war movies