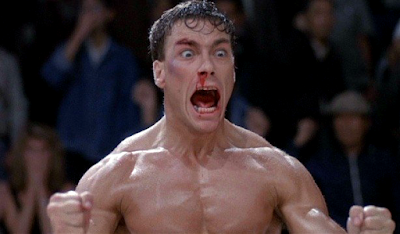 It's a 24 Hours of Movies/Heavy Action crossover!

Last week I programmed a hypothetical 24-hour marathon of Kurt Russell movies, because he's the best person who ever lived. It was a fun exercise and it got me thinking: are there other actors whose work I would be willing to watch for 24 hours straight? Yes. JCVD.

I love Van Damme. While Schwarzenegger may always be my favorite of the legendary action stars, JCVD isn't far behind. He actually has several things in common with Arnold: his athleticism, his self-deprecating sense of humor, his penchant for sci-fi. Though he had some rough spots in the late '90s and early 2000s, I love almost every period of Van Damme's career. He's done his most interesting work in the last 10 years, impressing more with his performances than with his fight scenes.

Because of the sameness of his filmography, I had some concerns about trying to put together a full 24 hours of Van Damme movies. After all, his body of work isn't as varied as Kurt Russell's. But after putting this list together, I realized I could easily sit through this lineup. The challenge isn't having to watch all of these in a row; the challenge is that there enough hours to watch all the stuff I wanted to include. I did my best. If your favorite is left off, that's ok. You can plan your own marathon. 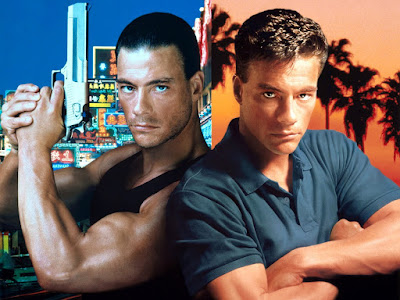 Normally I like to start these marathons semi-chronologically, starting with the earliest movies first. But I want to mix it up a little this time, so I'm going to start with a double dose of Van Damme. Might as well go all in right away. Ridiculous and goofy as this movie may be, I have such a soft spot for it because it demonstrates early in his career that Van Damme a) can act and b) loves playing twins. 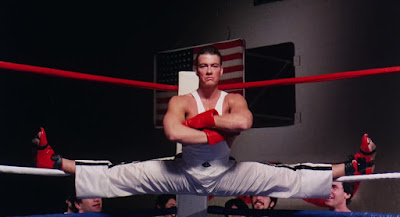 Now we'll dial it back to the start of Van Damme's career. While I'm not the biggest fan of his fighting competition movies (i.e. Kickboxer and Bloodsport, and yes I know I am mostly alone in this) I do think one should be represented seeing as how they were instrumental in launching him as an action star. I'll go with this, one of his very first films, primarily because I have never seen it and because he gets to play the heavy. Plus, rope splits. 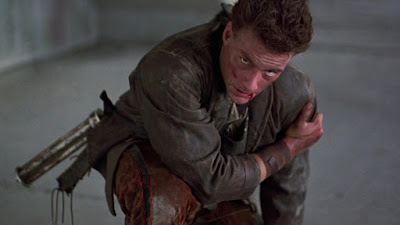 The first of many sci-fi films Jean-Claude Van Damme would make was borne out of two failed projects for Cannon Films: a Masters of the Universe sequel and a Spider-Man movie. When those movies died, director Albert Pyun threw together Cyborg to make use of the sets as well as some of the cast and production. The resulting film was taken away from Pyun and recut by Van Damme to make it more action-heavy, and though I enjoy Pyun's cut (called Slinger) I'm still a big fan of the version that made it to theaters. It has a tendency to be slow and features surprisingly little dialogue, but the post-apocalyptic vibe is cool as is the film's approach to science fiction as a western. Not for everyone, but I love it. 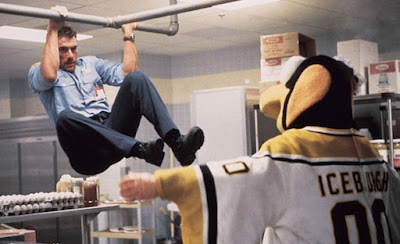 One of the last best entries in Van Damme's major studio period, Sudden Death is one of the very best Die Hard rip-offs and the best hockey-themed action movie ever made. He beats up a mascot. He puts on a uniform and goes out on the ice. He just wants his kids back. Bad guys get helicopters dropped on them. Powers Boothe is in it. After the somewhat draggy pace of Cyborg, this is exactly the kick in the dick we'll need. 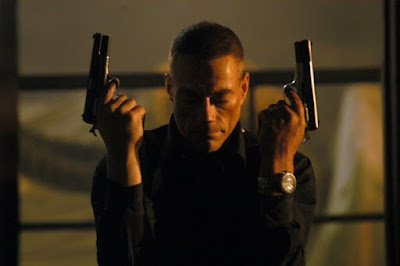 While many of Van Damme's DTV efforts can hardly be considered among his best work, it's important that they at least be represented during the marathon. This one, a revenge film in which Van Damme's former gangster goes on the warpath against the triad that murdered his wife and kidnapped his kids, is one of his best from this period. It had a trouble production -- original director Ring Lam (who has worked with Van Damme a number of times) left a few weeks into the shoot -- but the results are solid, with Van Damme tapping into the sadness that marks so many of his best performances. It's in his eyes. He has sad eyes. 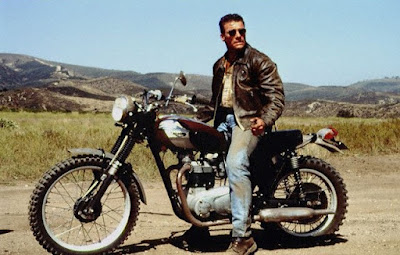 One of my favorite Van Damme movies and arguably one of his most underrated. Nowhere to Run casts JCVD as a drifter with a dark past who stumbles upon a country home and ends up taken in by the family, including adorable kid Kieran Culkin and Rosanna Arquette, rarely foxier. Though released by a major studio during Van Damme's peak success at the box office, the movie has a slower pace than most of his films and is much more of a drama/repurposed western than it is a traditional action film. It makes a case that Van Damme's career could have taken a different path if he was so inclined. 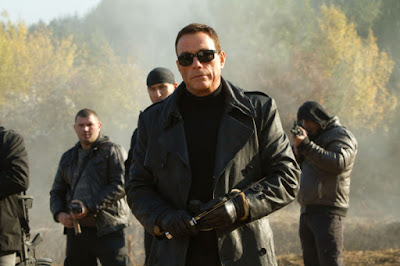 To give ourselves a slight break from the all-JCVD all-the-time nature of this marathon, I thought I'd plug in Expendables 2 here and allow for a bunch of other '80s and '90s action stars to take center stage. In some ways, this sequel improves on the original film; in others, it's a step down. The very best thing about it is the villain turn by JCVD (he's even named Jean Vilain!), who steals the movie from everyone else and is clearly having the time of his life on screen. He's so good he makes the whole film better. I had high hopes that this role would lead to a big-screen Van Damme renaissance, but it was not meant to be. Once I got over my initial disappointment over Expendables 2, I have learned to embrace the parts of it that are fun. Nothing about it is as much fun as Jean Vilain. 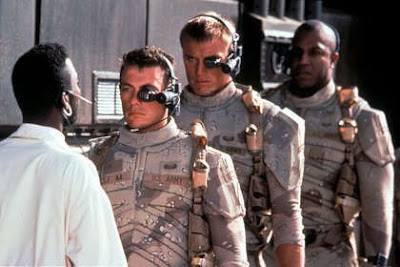 As we go into the overnight stretch of our marathon, I wanted to be sure to program the Universal Soldier trilogy (the real trilogy, disregarding The Return and those two movies they made without Van Damme or Dolph Lundgren) because they will get progressively darker and weirder and that's the kind of stuff I like when I'm sleep deprived. I'm still a big fan of the original film, which casts Van Damme and Dolph as soldiers killed in Vietnam reanimated as part of a secret government program to create super soldiers. The first collaboration between Roland Emmerich and Dean Devlin (who would later be responsible for Stargate, Independence Day and Godzilla '98) features much of their trademark stupidity but is told on a much smaller scale, making it leaner and more grounded. It's fun in an early '90s sci-fi/action way. Plus, it has one of my favorite Van Damme line deliveries of all time: "I just want to eat." 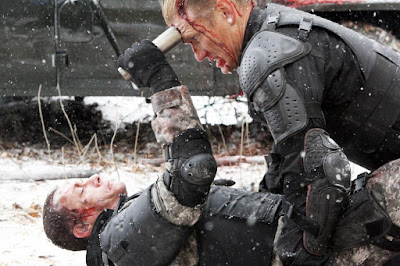 Eighteen years after the first film, the Universal Soldier was properly revived with this, probably the best DTV action movie ever made and one of my favorite Van Damme films. The UniSol program is revived in secret and one of them (UFC champion Andrei Arlovski) is among a group of terrorists responsible for kidnapping the children of Ukraine's Prime Minister. When a squad of American soldiers is wiped out in a rescue effort, former UniSol Luc Deveraux (Van Damme) is sent back into battle. The action sequences are brutal and incredibly staged, but the movie also adds a huge element of tragedy to Van Damme's character, showing him as a guy trying to overcome his programming until it is no longer convenient for the military for him to do so. Director Jon Hyams is the son of Peter Hyams, who worked with Van Damme during his studio heyday and is responsible for some of the best films of that period: Timecop and Sudden Death. I like this one better than both of those. 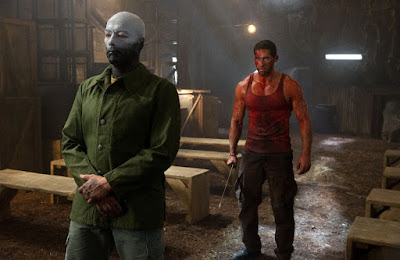 Here's where shit gets weird. Having made a truly great straight action film, director Jon Hyams returns to push the limits of the genre and creates something that's nightmarish and abstract and brilliant -- part David Lynch, part Gaspar Noe, part Joseph Conrad and part Stanley Kubrick -- while still managing to work in some of the most kickass action set pieces of the last 15 years. Plus, it's got Scott Adkins in the lead, which automatically makes any movie even better. While you don't absolutely have to have seen the previous two Universal Soldier films to appreciate this one, it's way better if you have and can follow Luc Deveraux's "arc," such as it is. This movie is an assault on your senses in the best possible way, and it's too bad more filmmakers aren't willing to experiment with the action genre the way Hyams does here. 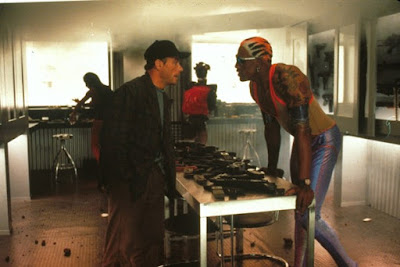 Having survived the brutality of Day of Reckoning, it only makes sense to swing 180 degrees the other direction to Van Damme's silliest period: the late '90s, when he was working opposite NBA stars and Rob Schneider and presumably doing large amounts of cocaine. There are hardly enough words to describe just how dopey this movie is. Dennis Rodman speaks in mostly basketball puns ("Oops! Air ball!") and the final fight sequence takes place in a giant Colosseum with Mickey Rourke and a tiger. At 5 a.m, this shit will make sense. 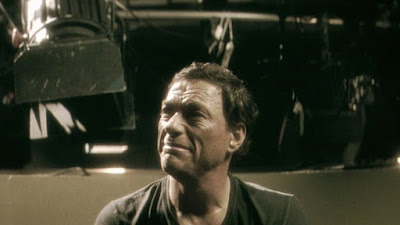 Having spent most of the 2000s doing DTV work of decreasing value (have you seen Derailed? The Hard Corps?), Van Damme had something to prove with this meta art film in which he plays himself having an existential crisis while being held hostage as part of a robbery. I love this movie a lot. It has an amazing one-take opening action set piece, a lot of self-referential material and a truly, truly great performance from Van Damme that is informed not just by his own acting ability but by a life and career filled with mistakes and regret. His extended monologue is a thing of wonder. Though I've always been a fan, JCVD gave me new appreciation for Van Damme as a movie star. 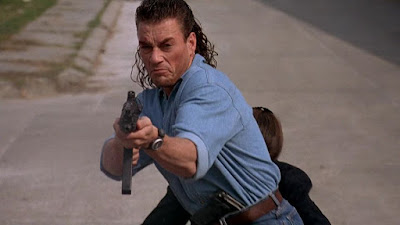 It was between this and Timecop to close things out, as they're probably his two most commercially mainstream movies. Since his sci-fi efforts have already been well represented in the course of the marathon, I went with Hard Target, the movie that helped change action cinema forever (for real). There's a lot of insanity in this one, whether it's Wilford Brimley's cajun accent or Van Damme punching a snake (#Snakepuncher) but it's all completely great. This is going out on a high note.
Posted by Patrick Bromley at 12:00 PM