This week I’m taking an in-depth look at one of my favorite romantic dramas, the absolutely batshit Bed of Roses.

*Please note: this column will contain spoilers for Bed of Roses.

A lot of times you say to yourself “Man, I can’t believe it’s been 20 years since [so and so] came out.” In the case of Bed of Roses, I can believe it. This is a movie that exists in a different era and maybe more specifically on a different planet altogether. I love it both ironically and un-ironically. It’s a PG-rated Prince Charming-esque fairy tales for adults written and directed by Michael Goldenberg and this is his only directorial effort. He has also written (or co-written) Contact, Peter Pan (2003), Harry Potter and the Order of the Phoenix and Green Lantern. But Roses, as I like to call it, is the only movie in his filmography that is truly 100 percent his. If this is Michael Goldenberg’s statement to the world -- if it’s the story that he was burning to tell -- then that fascinates me all the more. 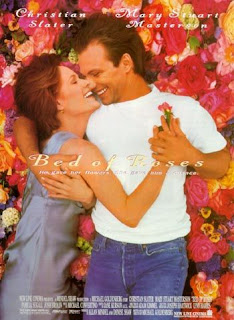 The plot in brief: A young career woman (Mary Stuart Masterson) is swept off her feet by a shy florist named Lewis (Christian Slater) who falls in love with her after one glimpse into her window. Here’s the movie’s trailer.

The 1990s were an interesting time for Christian Slater. Not only was he marketed as a budding action star in movies like Broken Arrow or a bad boy in something like Pump Up the Volume, he was also posited as a romantic lead in movies like Untamed Heart and Bed of Roses. True Romance might be the best amalgamation of his unique attributes as he gets to be a badass, a man of action and a romantic figure. But the truest romance Slater ever committed to film is in my beloved Roses. He plays an impossible character in a performance that is equal parts good, bad and WTF. I love it so much. His co-star, Mary Stuart Masterson, is playing a character just as nuts but the great reveal of Bed of Roses is that we don’t discover that until mid-way through the film. The only way for Masterson to beat Slater’s crazy is to match it or even exceed it.

But let’s take a step back and describe the plot less briefly. One day a woman named Lisa (Masterson) gets a bouquet of roses at her office from a flower shop owner named Lewis (Slater) who tells her “they’ll last longer if you put a little 7-Up in the water.” This is great, specific storytelling that I’m sure comes from someone’s life (possibly writer-director Goldenberg). Adam hearts specificity. Not knowing who sent her these flowers (the giver chose to be anonymous), Lisa goes on a search to unravel the mystery of who her secret admirer exactly is. She tracks Lewis down at the New York Public Library, where he (a grown man) is sitting and listening intently to a children’s story time because (in his words) “there’s nothing like hearing a story read out loud.” Lisa asks Lewis “Do you go to story hour a lot?” to which he replies “I haven’t been lately. She’s been sick.” This is never addressed as being weird behavior and the weirdness of that makes me love this movie just a smidge more. 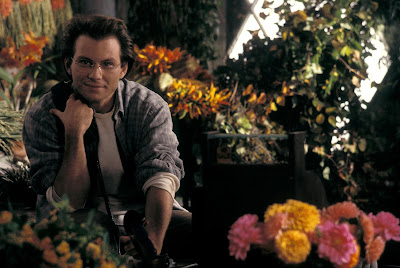 Before we continue, let me just point out a couple of things about Bed of Roses. One, the score is phenomenal. It’s by Michael Convertino and it’s so fucking good that it could be subbed into The Shawshank Redemption and no one would even notice. Second, Bed of Roses is an endangered species (like a flower that will eventually die when the winter arrives) because it’s a romantic drama that is not from Nicholas Sparks. It’s too good for that. I love Bed of Roses.

Ok, back to the story. So Masterson discovers Slater is the one who sent her the flowers because she catches him LOOKING INTO HER WINDOW AT NIGHT!!! CREEEEEEEEEPPPPPYYYYY!!! When she confronts him about this, he admits to sending her the flowers and also says that he does this kind of thing a lot. He likes looking into people’s windows and wonder what people’s lives are like/what they’re dreaming about. He then continues that he found out who she was because HE FOLLOWED HER TO WORK and asked someone who she was. Her reaction to this textbook stalker situation is to say “So, you sent me this beautiful bouquet of flowers?” The two of them then spend the day together and kiss but then at night she’s back at her apartment and we see her shoving the roses he gave her down a garbage disposal. Who does this? A crazy woman. That’s who. We learn the full extent of her craziness later in the movie. She’s damaged, you see. She can’t love. She can open her vagina but not her heart and soul. 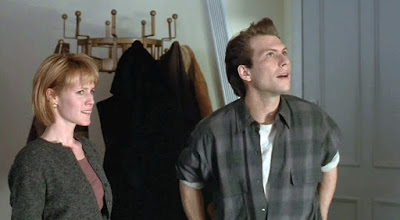 Masterson confides in her best friend, played by Louie’s Pamela Adlon, who thinks the whole situation is romantic as opposed to creepy. Later Slater admits that he chose Masterson as the subject of his affections because he looked up in her window one night and saw her bawling (she had just learned news that her foster father had died and her fish died to boot). Slater wants to do some balling of his own (actually, he wants to make love, Lewis doesn’t fuck…he makes love, softly) so he sends Masterson a dozen roses on the hour to her apartment. She’s flattered by the attention for some reason (she’s not creeped out by this) so she goes to Slater’s flower shop and proceeds to hear the saddest story ever told from him about why he is the way he is. They then make love and he leaves her a single rose. #LikeABoss. Of a flower shop. Masterson then goes to the kitchen to see Slater is cooking her breakfast. 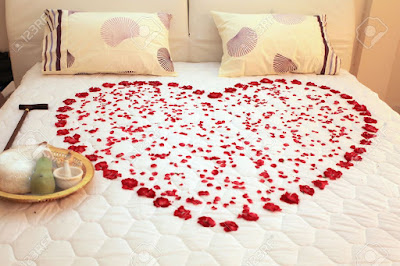 She asks “Where are my clothes?” and he replies “Oh, I took them to the dry cleaners” and that he also made her breakfast, bought her toothpaste and a toothbrush and also a robe. You know…while she was sleeping. They then go to story time together while the amazeballs song "Independent Love Song" blares on the soundtrack. Listen to this fucking thing and watch this video. It’s almost as funny as the movie. I swear, this song should be playing anytime anyone loses their virginity. In the rain. With candles. And a single rose.

I could go on and on but I won’t spoil any more because I do want you to watch this movie, especially in time for Valentines Day. It’s a movie that starts out hilarious and then broke my wall of cynicism. It’s on Netflix Instant. Check it out now! DON’T YOU THINK IT’S WORTH THE RISK???