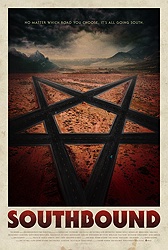 We're getting spoiled with horror anthologies.

As a lifelong fan of the horror anthology, it's been super rewarding to see them make such a comeback over the last 10 years. While their overall quality is about as inconsistent as the segments in most anthologies, there have been enough good ones -- or even enough good segments inside of uneven movies -- to get me really excited about their revival. From Trick 'r Treat to Chillerama, the V/H/S films to last October's Tales of Halloween, horror anthologies have come back in a big bad way and I couldn't be happier about it.

The latest anthology to join the party is Southbound, put together by many of the same filmmakers responsible for the original V/H/S.  The movie tells five stories, each of which bleed into one another in a way that's more Trick 'r Treat than it is Creepshow -- it works more like a continuous narrative that switches characters every 15 minutes or so. There's a unifying theme that ties all of the stories together: the characters have all made mistakes which they are either running from or which they're trying to atone. Some are more successful than others. Very few of them are. 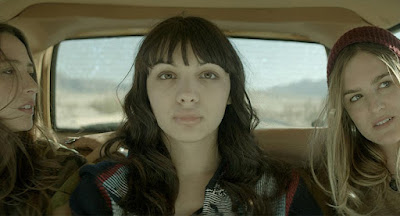 First up is "The Way In," directed by the collective known as Radio Silence, in which two men drive through the desert covered in blood for reasons we do not know. As they make a pit stop in a town from which they appear unable to escape, something...else...comes looking for them. Their story segues directly into "Siren," directed by Roxanne Benjamin, a producer on the V/H/S series making her directing debut. An all-girl band gets stranded on the road and takes a ride with a group of people (among them comedian Dana Gould) who bring them home for dinner and turn out to be more than they seem on the surface. After that is David Bruckner's "The Accident," which finds a man (Mather Zickel) hitting one of the girls from the previous segment (Fabienne Therese, quickly becoming one of my favorites of the genre) and has to go to extremes to save her life. In Patrick Horvath's "Jailbreak," a man (David Yow) finally finds his sister after years of searching only to discover she might not be interested in a rescue. The movie wraps up with Radio Silence's "The Way Out," which catches back up with our drivers from the first segment and reveals just what it is they were doing out in the desert.

The approach that the filmmakers take with Southbound -- from the writing stage through the execution -- helps to stave off a lot of the disparity that plagues a lot of horror anthologies. There aren't any segments that feel like they belong in different movies, which is no feat to accomplish when multiple filmmakers are collaborating on one anthology. There's a consistency to the tone and the execution that again makes it feel like one unfolding story that takes a number of different paths instead of something with a bunch of stops and starts. Great care has clearly been taken in the construction of the movie, and it's very impressive as anthologies go. 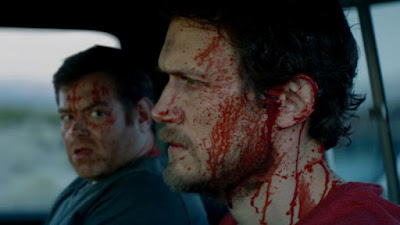 A number of the segments feel as though they only tell half a story. Again, this may be a result of the approach the filmmakers have taken in that the way the sequences slide into one another is designed so that they appear as pieces of a much bigger story, not self-contained shorts as they might appear in most other anthologies. It works in the broader context of the movie because each of them explores variations on the same theme, meaning that while one segment doesn't complete the thought the next one will pick it up. At the same time, they still feel like half complete thoughts. Introducing a premise isn't the same thing as paying off that premise, and too many of the segments in Southbound opt for the former when the latter would make for a more satisfying film.

Even the segments that don't completely come together have moments that make them totally worthwhile. The things that are chasing the two men in "The Way In" are creepy and wonderfully designed, though better viewed at a slight distance because of some CGI. The female protagonists of Benjamin's contribution are a nice change of pace from, say, the bro-heavy subjects of the V/H/S movies, and all of the segments do a great job of creating scenarios that grow increasingly nightmarish and out of the characters' control. It's the film's organizing conceit, and while it's never explicit about their descent into Hell as punishment for actions that take place both on screen and off, there's no mistaking what's really going on here.

Just as he did in the original V/H/S, David Bruckner turns in the best of the segments by a pretty significant margin. His two-character sequence "The Accident" is the most tense and horrifying of the film while also being least reliant on supernatural horror tropes -- it is, for the lack of a better word, the most "realistic." Therein lies the horror. While there are elements that we cannot quite explain, be it voices on a telephone or empty locations that all feel off in some way, what makes the segment so good (beyond the performances of Mather Zickel and Fabienne Therese) is that it is somehow identifiable. These are people in horrible circumstances well beyond their abilities or understanding, and watching the events unfold with a sick, escalating inevitability induces both squirms and chills. After being the best part of three separate anthologies now, I can't wait for Bruckner to finally direct his own feature. And maybe it doesn't have to be another Friday the 13th remake.

I've got a feeling Southbound is one of those horror movies that people are going to really flip out for -- I've heard as much coming out of the festival circuit -- but which I just liked. That's ok. It's well photographed and well constructed and, like a lot of recent indie horror, features a really cool score (by The Gifted). It distinguishes itself enough from other anthologies to work, even if the pieces didn't all come together for me. But between this and Intruders and Nina Forever, the horror movies of 2016 are off to a good start.