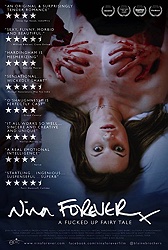 A little undead romance just in time for Valentines' Day.

Nina Forever is the movie that Burying the Ex was trying to be. Joe Dante's latest movie, released last year, was about a guy unable to get a new relationship going because he was haunted by the undead body of his ex, tragically killed in an accident. It's a good idea for a movie, but Burying the Ex was more interested in juvenile humor and ugly attitudes towards women to really explore its own metaphor. That's a job better handled by Nina Forever, the feature directing debut of Chris and Ben Blaine. This movie is so good. 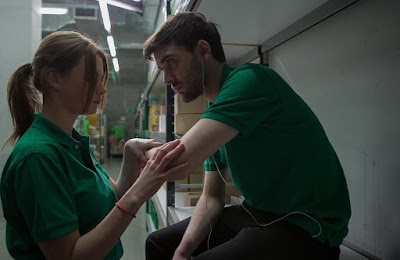 Cian Barry plays Rob, a nice guy who, as the movie opens, is ending another failed relationship and contemplating suicide, having never recovered from the tragic death of his girlfriend Nina. Feeling low, he begins to date med student Holly (Abigail Hardingham, soon to be the lifelong crush of male and female horror fans alike). Things progress and they're ready to have sex; trouble is, as soon as they start the bloodied and immobile body of Nina (Fiona O'Shaughnessy) appears in the bed alongside them. The problem persists any time Rob and Holly try to get physical to the point that Nina has become a third partner in the relationship.

Nina Forever isn't a horror movie in the traditional sense. It's horror movie in the way that last year's Spring was a horror movie, which is to say that it uses certain horror conventions as a metaphor for a larger story about grief, relationships and the baggage we all carry. By literalizing the spectre of Rob's past, the film becomes a dark comedy -- there's something inherently funny about this bloody corpse materializing from the bedsheets like something out of Hellraiser every time Rob and Holly get close to having sex. O'Shaughnessy plays the role very funny, too. She's part hurt by betrayal, part irritated to have to watch Rob with another woman, part resigned to her own helplessness. She's sarcastic and eventually starts trying to mindfuck Holly away from the relationship. Holly, to her enormous credit, tries everything to make the insane circumstances work -- and I do mean everything. The movie isn't afraid to take a story about an attractive couple and a ghost/zombie sharing a bed together to its logical conclusion. 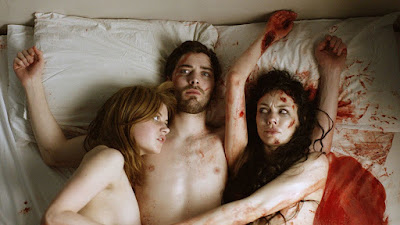 The longer the problem persists, though, the more Rob and Holly begin to realize that it isn't just a simple case of needing to "move on," and that the issues that both of them are facing run far deeper than either is aware. The Blaines attempt to shift the metaphor in the movie's final third, weakening it somewhat in the process while also striving for something richer and more ambitious. Though it prevents the film from being a fully focused exploration of a single idea -- which, I have to admit, I would have been fine with because the way it's explored for its first two thirds is so original and compelling -- I can appreciate that Nina Forever wants to extend its reach and pursue some new ideas. I just don't think there's enough time and attention paid to this material for it to work nearly as well as the main thrust of the film.

Horror is better equipped than maybe any other genre to be about more than it's about. Usually it's because the movies are speaking to our unconscious fears and anxieties, and not just in the literal "there is a man with a knife who wants to kill me" way. They force us to consider what the man with the knife represents, and why a specific period in American history was able to support so many movies about men with knives trying to kill us. But horror is so often used to explore ideas and emotions that we don't immediately identify with the genre, whether it's David Cronenberg processing his divorce in The Brood or 2014's The Babadook examining depression and the anxieties of being a parent. Nina Forever is that kind of horror movie. Those looking to be scared or grossed out will come away disappointed, as the film is not interested in being those things. But those who have had to work at a relationship in which one person's past played a role or who has experienced the death of someone close to them will recognize a lot of the emotions that the Blaines are processing. This is a movie that has a lot to say about love and loss in a very human way. It just does so through the language of horror movies. 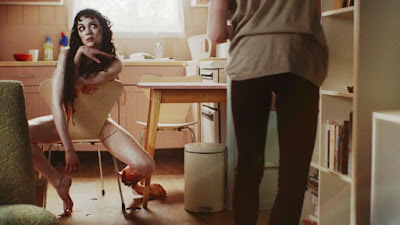 Nina Forever is yet another excellent film being put out by the good people at Epic Pictures, the company responsible for releasing both Turbo Kid and Tales of Halloween last year (as well as a bunch of great movies before that). I like that genre films are getting to a place now that they're almost being "curated" by companies like Epic, who have shown such good taste in projects thus far that I will seek out anything they choose to put out next. Nina Forever is idiosyncratic and funny, sad and weirdly sexy (which may say more about me than the movie, but again, Abigail Hardingham). It feels personal and specific -- two qualities not always associated with the horror genre -- and is no doubt going to help someone through a breakup or loss someday. We can't ask for more from our art than that, especially art with undead threesomes.