Cinema Bestius: All the President's Men

“I am not a crook.” -- President Richard Nixon

“I did not have sex with that woman.” -- President Bill Clinton

“Simply stated, there is no doubt that Saddam Hussein now has weapons of mass destruction.” -- Vice President Dick Cheney

“Number One… I could be the most presidential person […] other than Abe Lincoln. He was pretty good…” -- Presidential candidate Donald Trump

The Pope has a long history with this film and its subject matter, going all the way back to when I was a little Pope in the fourth grade and my homeroom teacher wheeled a television monitor into the lunch room so that all of us kids could watch the Watergate hearings live. “Watch this carefully,” he said, “You are going to want to remember this.” He was right.

I can remember all the way back to first grade when Nixon ran for President against Hubert Humphrey. I was six. Humphrey seemed like a kindly uncle; Nixon scared the shit out of me. I can only conclude that I was either preternaturally ahead of the curve on this one or that in 1968, even a child could have told you that Nixon was a scary, evil felon. Hunter S. Thompson famously said that Nixon was so evil that even his funeral was illegal. I once took this to be a pithy one-liner, but it turns out that it is true. Nixon is buried in his own backyard at his estate in Yorba Linda, California. I am assuming that his family did not want to risk burying him in a public cemetery. 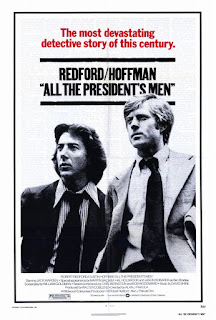 I mention all of this to admit my bias. I believe Nixon stole a part of this country’s soul that we have yet to get back. This is important. This matters. None of his wrongdoing would have come to light if it were not for two dogged, earnest investigative reporters who did the world a favor by uncovering the massive Watergate scandal. The ambition of Bob Woodward and Carl Bernstein’s investigation and the Washington Post’s trust in them cannot be overstated. Much like the recent Spotlight, when viewed today All the President’s Men forces us to mourn the lack of real investigative journalism in the 21st century.

Let’s go back again to April, 1976: I am now fourteen and about to see All the President’s Men at the Woodfield 1 & 2 theaters, where the screens were HUGE. I foolishly stop for popcorn before going into the theater. The movie is popular, my screening sells out, and I must sit in the first row. This is another measure of a great film. Even when watched in this vertebrae-punishing posture—staring straight up, as if the film is being projected onto the side of a high-rise building and I am a squirrel on the ground—the film works as an engaging narrative and as a meditation on dishonesty. 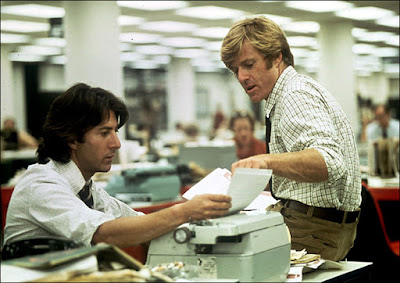 The Plot in Brief: On June 17, 1972, five burglars break into Democratic Party Headquarters in the Watergate Hotel in Washington, D.C. Washington Post writer Bob Woodward (Robert Redford) is intrigued and writes a story. As the identities of the burglars are revealed, the story becomes more intriguing. Woodward continues to follow up and is eventually joined by fellow journalist Carl Bernstein (Dustin Hoffman). The two are dogged in following every lead. Woodward attracts a “deep cover” source (Hal Holbrook) so afraid of repercussions that the two only meet in parking garages in the middle of the night. Woodward and Bernstein trace the scandal all the way to the White House. Did President Nixon mastermind an illegal break-in of Democratic Headquarters? 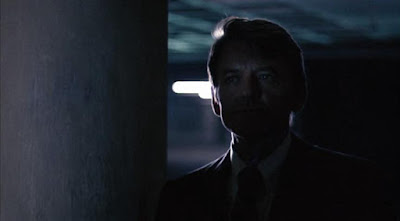 The performances in the film are so authentic it hurts. From Woodward’s tortured source “Deep Throat” (Hal Holbrook) to canny editor Ben Bradlee (Jason Robards) to frightened, mousy accountant Judy Hoback Miller (Jane Alexander) to conscience-stricken Hugh Sloan (Stephen Collins) to sleazy, delightful Donald Segretti (Robert Walden) the cast shines in a way that benefits the film and not their personal aggrandizement. Both Robards and Alexander were nominated for supporting Oscars. This was back in the day when, in Alexander’s case, an actor could get nominated for a single scene.

All the President’s Men’s Three Miracles: The verisimilitude of the Washington Post newsroom—a movie set built in Burbank, California that was so authentic, the production designers brought in real trash from the Post to fill the on-set wastebaskets; the filmmakers’ artful use of narrative and expository tools to make sure the audience is never confused (I believe their use of the teletype machine and its amplified cacophony for both prologue and epilogue is what won the film its “Best Sound” Oscar); and Robert Redford and Dustin Hoffman’s career-best performances. No slouches they. 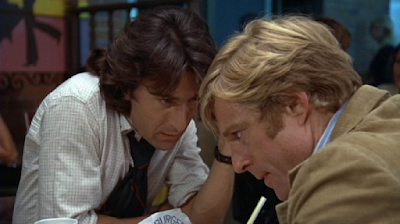 I am gratified and amused on a regular basis by some of the social change my advancing age allows me to witness. The election of our first black President and the legalization of marijuana are events that, quite frankly, I did not think I would live to see! I have also lived long enough to learn the real identity of “Deep Throat,” Bob Woodward’s mysterious Watergate source in All the President’s Men. Many theories were posited and many names discussed during the thirty years or so that this remained a secret. Some people thought it was future Secretary of Defense Alexander Haig; others thought it was Diane Sawyer, then working as a Nixon White House aide. In 2005, retired F.B.I special agent W. Mark Felt revealed that he, in fact, was Woodward’s whistle blower.

I now headily anticipate the revelation of even bigger secrets in the coming years. Who really killed Kennedy? Who is the subject of Carly Simon’s song “You’re So Vain?” Sure, she’s “admitted” it was Warren Beatty—but she also once joked it was Mark Felt! What exactly IS IT in Castle Cheese Company’s Parmesan Cheese that the Food and Drug Administration found NOT TO BE CHEESE? Actually, I know that one: it’s cellulose derived from wood pulp. But wood pulp does not taste like cheese, not even remotely. Only cheese tastes like cheese. Why is there so much wood pulp in the cheese? Is the government working on secret “cheese trees”? We need more investigative journalists in this country, and we need to put those journalists on this cheese story! As the Pope of Film, I so proclaim it worthy. Watch All the President’s Men at your earliest possible convenience and accompany the screening with some nice, smoked, pulp-free Gouda.