Glutton for Punishment: Girl on the Run

We are all interested in bad movies, inexcusable cinema, worse-than-mediocre pictures, and miserable excuses for art, for that is the stuff we use to fill the empty spaces in our eyepits. You are interested in the unknown, the mysterious, and the unexplainable—that is why you are here. And now, for the first time, we are bringing to you the full story of one of the worst movies ever made in a carnival. We are bringing you all the evidence, based only on the secret testimony of the miserable soul who survived a screening. I am that miserable soul. The absurdly low budgets, the cramped tents, the ridiculous plots, the suspicious-smelling sawdust, the risible acting—my friend, we cannot keep these a secret any longer. Let us punish the guilty. Let us form search parties and hunt down the makers of Girl on the Run like the dogs they are! Let us reward the innocent. Remember, my friends: terrible movies such as these will affect you in the future! 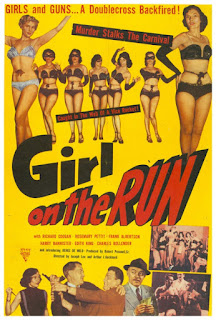 Girl on the Run, the mis-titled 1953 carnival noir (yes, that IS a real genre.) begins with silent carnival footage shown at the wrong speed, with generic music and sound effects added later. At first it seems the film will be a standard film noir with the added bonuses of little people, stripteasers, and clowns... but we do not wind up with “more.” We wind up with less, oh my gentle readers, far less. We quickly focus on a creepy laughing mechanical clown that the filmmakers will bring back at the end of the film for some easy irony—the movie was about a BOY on the run, silly, not a girl!

You know you have seen too many movies when, during the opening credits, you say, "This can't be all bad—Frank Albertson is in it!" You are later proven right. Albertson is the best thing in the film; he just isn’t in it that much. Another sign you may have seen too many movies is when, during the opening credits, you come to sudden realization that you love any movie with characters named Marty, Gigi, Red, or Bat… and this film has ALL OF THOSE AND MORE. 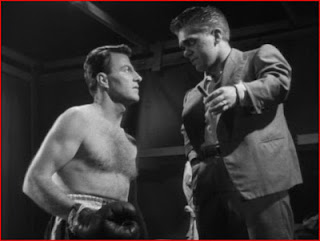 The Plot in Brief: A two-bit carnival operates on the fringes of the law. The colorful rides and shows disguise sleaze, larceny, and murder. Bill Martin (Richard Coogan) is accused of a murder he did not commit. He and his best girl Janet (Rosemary Pettit) hide in the carnival. Martin becomes part of a rigged boxing exhibition. Janet is forced to perform a tawdry striptease. The police are astoundingly inept in their investigation. We learn of hidden intrigues from the past. Pasty, unattractive women dance endlessly. Tedium ensues.

What we end up with is an exceedingly short noir, endlessly interrupted by odd, rarely risqué burlesque dancing by women who have no business burlesque dancing. Of course, we do get to meet Miss Pineapple of 1953. Yum. I can't emphasize enough how annoying this is—every time we are moderately drawn in by the “carnival being shaken down by the local police” plot or the “wanted man hiding out in a carnival” plot, the movie grinds (sorry) to a halt for more subpar dancing from bored carnival ladies. I wonder if this frustration is what the filmmakers intended? Late in the film, the audience is primed to see a boxing match between two main characters, and the filmmakers cut to (SPOILER) more horrible dancing. By the time we get back to the boxing match, we are more interested in identifying extras in the crowd from earlier in the film than we are the actual drama in the ring. Later, we cut back to the tent with the exotic dancers and, since the filmmakers use leftover footage from a scene at the start of the film, the same extras are seen in the audience in the exact same seats—suggesting that these townspeople have been sitting and watching this strip show for eleven or twelve straight hours. Life in this town between carnivals must be an existential hell. Near the film's climax, the filmmakers have all of the burlesque dancers suddenly fight EACH OTHER, simply to bolster the audience’s flagging interest. 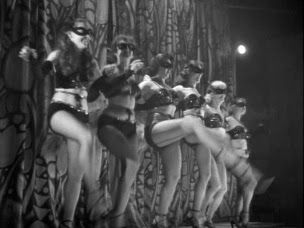 The story is so poorly structured that, when the filmmakers cut to from one scene to another, the actors in the first scene are standing exactly where they were previously, suggesting they just froze silently until that other scene was finished. Some of the more risible scenes include...

…comely murder suspect told to disguise herself by wearing a revealing bikini. "They're looking for a dame IN CLOTHES. THEY'LL NEVER LOOK FOR YOU IN THAT!" (Yes, this is the actual line.)

…Steve McQueen as an extra in two short scenes.

…dialogue that mixes important plot points with unnecessary carnival minutiae. The filmmakers either think this makes the whole enterprise more authentic or expect the audience to have the years of carnival experience necessary to sort through the facts. Since everything is given the same emphasis, it’s very difficult to figure out what’s important. The plot winds up being very confusing, even though it’s laughably simple. Did the filmmakers think that confusing the shit out of the audience was somehow clever? “Heh heh, they’ll never guess the ending because our complete lack of skill frustrated them to the point of apoplexy!”

Exterior shots of tents cut to interior scenes with walls. This is either a very fancy tent or very bad basic filmmaking. Several times slamming a door makes the entire set shake, a familiar phenomenon in low-budget films. All the doors seem to be only four and a half feet tall. The owner of the carnival is a little person; is this Tiny’s “joke revenge” on his employees?

Still, you've got to applaud the filmmakers’ facility for stretching a budget. For an important exposition scene filmed in front of a canvas tent, lighting and sound effects suggest that the two characters in the scene are in the shadows of the Ferris wheel; it’s an obvious effect, but surprisingly effective. As the film wears on, though, the effect is overused: at various times, it simulates a prize fight, a train, and a line of dancing girls. It’s as if the filmmakers missed every single day of film school, except the day they covered the kookaloris. 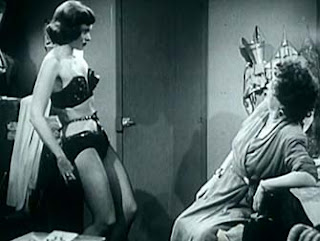 At the end of the film, the whole mess is explained to us using evidence that has never been shown or talked about; the mystery can only be solved using clues that occurred before the film began. WTF? The final shot of a mechanical clown laughing maniacally seems to be the filmmakers laughing at us for entrusting them with our money and our time. 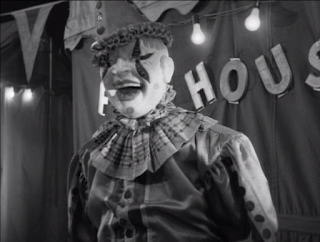 In the final analysis, the filmmakers try to give us five movies in one: hard bitten slice-of-life, noir mystery, movie musical, boxing film, and a nudie-cutie. They succeed at none of these. Girl on the Run is less than one hour long. It feels longer than Gone With The Wind, and there’s no carnival footage in Gone With The Wind.

My friend, you have now read this column, based on my own sworn testimony. Can you prove that this film doesn’t exist? Perhaps on your way home, two carnies will pass you in the dark, and you will never know it, but they may just be Arthur J. Beckhard and Joseph Lee, the directors of Girl on the Run. Many scientists believe that bad movies are being filmed at this very moment. We once laughed at fire, the wheel, gravity, the horseless carriage, the carnival sideshow, the electric light, and the airplane. So much laughter! And now some of us laugh at very bad movies. God help us in the future.

Email ThisBlogThis!Share to TwitterShare to FacebookShare to Pinterest
Labels: 1950s movies, frank albertson, girl on the run, glutton for punishment