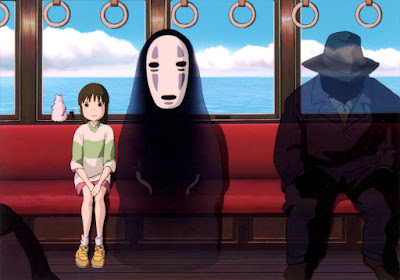 As a kid, we would wake up early on Saturday and Sunday mornings and get our cartoon fix on. And it never failed (almost like it was a weekly programmed thing or something), but there would be one or two animes that would come on and I would have to suffer through until something good came on. (I have done a quick Google search, specifically to reference it [them] here, but cannot find the anime show(s) that would inevitably turn me off the genre for decades).

Fast forward to 2013, I meet Daryl, we hit it off, and the question of “Do you like Anime” comes up. “I hate it” was my response, I believe, to which Daryl responded something along the lines of “You need to watch Howl's Moving Castle with me." We did, and thoroughly enjoyed it, but I stuck to my stupid stand of not liking anime.

You think I would be let off that easily? Nope. I lost track of how many times it has been requested that I do a piece on anime. I seem hardly qualified for the job, as I DO NOT LIKE ANIME, nor do I know anything about it. (I am an Ox AND a moron it would seem, as how can I not like something I have virtually zero knowledge about?) Finally after almost two years of harassment, I caved and Daryl happily programmed us a full day of anime films, and to be specific, Hayao Miyazaki's Studio Ghibli films. 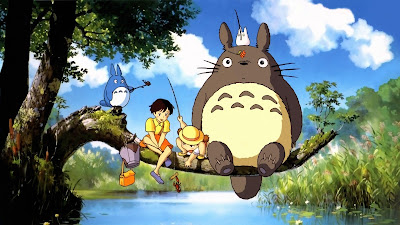 Shit. Within the first few seconds I was sucked in. The beautiful backgrounds had me by the face and wouldn't let go. It's a simple story about a father and his two daughters that move to the country to be closer to their ailing mother. There's no villain, just a wonderful and uplifting story, which just so happens to include a few nearby woodland spirits, primarily the titular Totoro. As the film progressed, I found myself simultaneously unable to tear my eyes from the screen, yet wanting to research more about it while the beautiful story unfolded before my eyes. For me, the downside (?) to technology is the ease with which it can draw me away from a movie I am watching with the promise of more information about it at my fingertips. I will then inevitably miss some crucial moment and not understand the next fifteen scenes. Luckily for me, I WAS paying attention and have to say that my absolute favourite scene was their standing in the rain waiting for the bus. It was beautiful, funny, intriguing and then there's a cat! Hmmmm......

But this is just anime, and I don't like it. 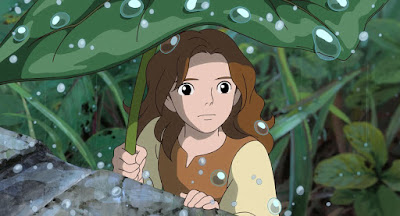 Meet the Clock family, four inch tall people that live within the walls of a house. Wait...What?

I was down with the whole flying cat bus and giant woodland spirit, but this seems like I'm going to have to push my beliefs (you'd think it would be the other way around, but I'm a backwards weirdo.)

Arietty is the teeny tiny “borrower” that lives in the country house that giant human-sized Sho is resting in while he awaits his upcoming heart surgery. Sho sees Arietty, their family's cover is blown and they must escape before they are caught by actual mean humans. And that's the story. But there's SO much more to it! I was entirely drawn into their little world, marvelled at all the little things that helped to create it (the nails in the walls that act as steps, the countless flowers that Arietty brings into her room to create a garden in her bedroom, the teeny tiny everyday items which we use that are turned into the most incredible tools for the Borrowers), their world is a magical one. It's so funny and odd, but I think my favourite scene is when the crow flies down and gets caught in the blind. I was genuinely fearful for Arietty's safety, and it literally felt like it went on forever (much like it would in real life should that occur... Stupid bird).

Dammit, now I'm caring for the characters? I don't frickin' like anime! 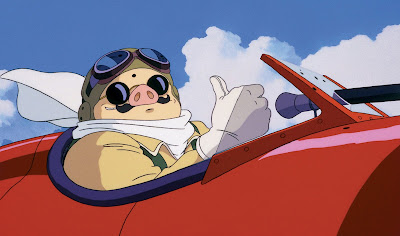 What the crap? A flying pig?

Looks can be deceiving my friends, as I so quickly discovered. In fact, the aforementioned flying pig is Marco Pagot, a WWI pilot that lost faith in humanity and was cursed to live the remainder of his life looking like an anthropomorphic pig, thereafter known as Porco Rosso. Set during the rise of the Nazis during 1930s Italy, Rosso is the one Ace pilot feared by all. I will leave it at that. Miyazaki's ability to create such detailed and realistic landscapes, weave in an intriguing, beautifully uplifting and sad story, and bring to life through freakin' animation a piece of aeronautical history, makes me want to be a part of this world.

Unable to stop thinking about this film... I... I, like anime? 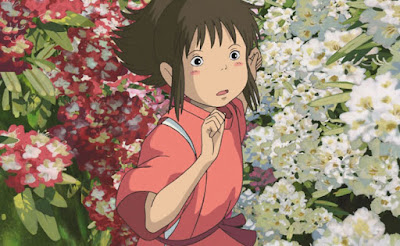 This Oscar-winning film is by far the most critically loved and appears at the top of most favourite anime lists. Our introduction to the world is discovering it through the main character Chihiro's eyes, and it's world is full of magic, witches, curses, spirits and, well, wonder. It is a masterpiece from all angles. You forget that the characters are animated creations and that their story will unfold as it has been written. I felt as though I were in step with Chihiro's every move and through every beautiful, magical and horrifying scene, and that by sheer will I could help her outcome. (Spoiler) Maybe I did help, because as with all others I am writing about today, it has a very happy ending. 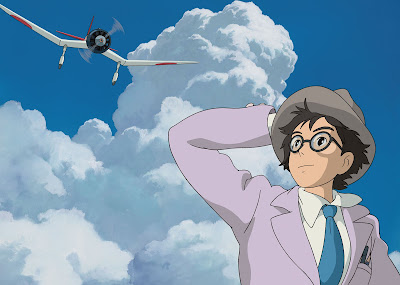 Wow. I don't even know how else to start this. As I wrote about all the other films, this was the one I was most looking forward to praising. It's the only one we watched in Japanese and I, for one, wouldn't have had it any other way. The lead character Jiro's voice is understated, soft, yet perfunctory and strong in every word spoken. We would have lost that in English dubbing, as there is no one in the acting world that I could imagine voicing him. Miyazaki's love of planes and aviation is again at the centre of this story, this time based on the life of Jiro Horikishi, the man who designed the Japanese Zero fighter planes for WWII. This film is the most dramatic, sentimental and beautiful that we watched for this piece, and by far (miles really) my favourite and if possible, has further deepened my love of history. How really is it possible for a cartoon to do that? With a perfect story, score and animation, combined with sheer passion and love that was poured into it, anything is possible. Not to mention man-made sounds (some by the director and producer Toshio Suzuki) for most of the giant explosion and earthquake rumblings. Start and finish with a Wow.

As we progressed through each of the movies, I understood why Daryl chose each one and fell more and more in love with the genre, or with Miyazaki's contribution to it. These films moved me in a way I would have previously never have guessed possible, and I have not stopped thinking about them, particularly The Wind Rises. I even watched a documentary about Miyazaki's life, Studio Ghibli and which almost acted as a companion to The Wind Rises, as it was filmed during the creation of the film. It's called The Kingdom of Dreams and Madness. Watch it, it's fantastic.

Beautiful realism, historical world issues and humanity's spiritual relationship with nature, not to mention breathtaking animation, a perfect combination of score and voice talents make Hayao Miyazaki's films my perfect introduction to anime. And I may just stick with his films. Or no more at all. Because I don't like anime.