Don’t be fooled by the title. This is a Suicide Squad movie.

When it comes to keeping up with DC/Warner Brothers’ direct-to-DVD animated superhero films, I’ve seriously lapsed in my coverage. I used to stay on top of these things and watch them on release day, but it’s become harder and harder to get excited about these movies as time has gone on. In the past, WB has mined some of the most successful DC Comics stories for their animated adaptations, and we’ve gotten the occasional gem like The Dark Knight Returns or Batman: Year One as a result. WB has also produced the occasional original story here and there that isn’t based on a comic book storyline. These are usually less successful, but sometimes still entertaining, such as last year’s two Batman Unlimited movies, which I actually loved for being different and fun.

For the last couple of years, though, the focus seems to have been split between classic comic book storyline adaptations and stories that take place in DC’s “New 52” universe. DC Comics rebooted their entire continuity back in 2011, basically wiping the slate clean on 75 years of publishing and launching their characters with “fresh” updated origins and lots more angst. Launching the line with 52 titles, they dubbed this “The New 52.” That new continuity provides the landscape for DTV movies like Justice League: War, in which the members of the Justice League meet each other for the first time, fight, then unite to face a common threat. Even movies that aren’t directly linked to New 52 stories still draw from elements of the newer continuity. To be blunt, those movies are just miserable. I understand the need for new jumping-on points for younger people who haven’t lived with these characters for years, but there are two problems with this: 1) these animated films aren’t geared toward younger audiences, and 2) we don’t need more comic book origin stories; what we need is quality storytelling. Just because a movie is DTV doesn’t mean it isn’t capable of amazing storytelling. See The Dark Knight Returns for an example of how a film can throw you directly into the fray without holding your hand, and yet be an incredible success in terms of character, plot, and production. Have a little faith in your audience. Then again, TDKR adaptation had the work of Frank Miller as its framework, while these newer movies most definitely do not. Still, I can’t help but feel like the DC Animated Universe is on autopilot these days. Aside from a few high profile upcoming projects, it’s looking pretty dismal. 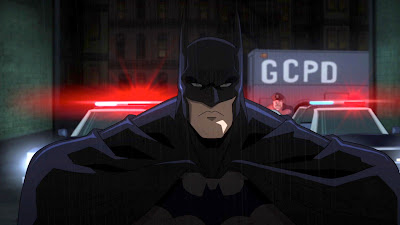 So it was with pretty low expectations that I watched Batman: Assault on Arkham, a film that first hit DVD back in 2014 and had been sitting unwatched on my shelf ever since because I Just. Could. Not. Do. It. I finally mustered up enough enthusiasm to pop this in and was surprised by what I saw. This isn’t really a Batman movie, despite his visage being the dominant image on the box art. Nay! Nor is this an origin story. What this actually turns out to be is a balls-out Suicide Squad story. Some history: Task Force X (AKA The Suicide Squad) is a team of supervillains who have been tapped by the government to do jobs that are so gnarly and heinous that Uncle Sam doesn’t dare employ his own operatives. These villains are enticed with diminished sentences and clean slates, but have explosives planted in their noggins so that if they fail their mission (or succeed?), they can be eliminated with the push of a button. It’s a really neat concept, offering some bad guys a chance at redemption and others a chance to do what they’re best at. The concept succeeds because it shines a spotlight on the crazy cooks of the DC universe that are otherwise relegated to the background. Comic book fans love The Suicide Squad, and the team has been a cult favorite since the late 1980s. If you mix a dash of The Dirty Dozen with a hint of The Expendables and throw in a heaping portion of Deadpool, you get The Suicide Squad. Violent, funny, and often used to poke fun at the universe they exist in, The Suicide Squad is pretty unique. And because there is a limitless string of villains in the DC Universe, anyone can be killed at any time and instantly replaced. What’s not to love?

So if this isn’t a Batman movie, why the title Batman: Assault on Arkham? Marketing, I guess. Plus, the presence of the Arkham name--which DC/WB has worked very hard to brand in the last few years--is most likely an attempt to capitalize on the wild success of the Arkham Asylum video game series. Don’t get me wrong: both Batman and Arkham Asylum figure heavily into the plot, but neither are the focus. The focus is most definitely The Suicide Squad. What a difference a year makes! Had this been released a year later, it would have been branded as a Suicide Squad movie with Harley Quinn taking up the entire cover art. Maybe they’d have even called it Harley Quinn: The Movie. Or Harley Quinn and Some Other Guys Kill People for ‘Murica. I’m just saying, it’s Harley’s world; we just live in it. 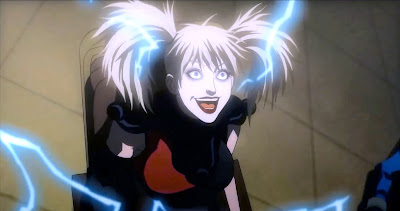 As far as I’m aware, this is the first DC animated film to put Harley Quinn in such a prominent role. I mean SURE she’s a member of the team here, but she runs away with the movie. The character has come a long way from the character Paul Dini created for Batman: The Animated Series in the early ‘90s, and now represents more of an anti-hero with a healthy dose of empowered sexuality. Somehow she’s become an icon beloved by both men and women, despite the fact that she’s a psychopath. She’s a femme fatale, but the fatale aspect has never been so much fun. Harley has become DC’s Deadpool, and this movie allows her to be the character her fans want her to be. She’s strong, sweet and lovable, sexy, dangerous, funny, and completely insane. It’s a major step forward for the character in mainstream entertainment. Fingers crossed that the character continues forward in David Ayer’s film and not backward.

The things that I want from an animated superhero film are all present. I want to see strong characters saying lines that don’t sound canned. In the world of comics and animation, there are very few limits, so I want surprises. I want over-the-top fight choreography that I can’t see in a live-action movie, and I want the story to embrace the spirit of comic books and be fun to watch without posturing and calling attention to how gritty and moody it is. If you have to constantly remind me how tough you are, you’re not tough. Batman: Assault on Arkham thankfully delivers these good elements while mostly avoiding the bad.

Voice acting is important in an animated project, and this is kind of a mixed bag. On the positive side, Kevin Conroy once again returns to the role that he defined almost 25 years ago on Batman: The Animated Series and continues to be the only actor many fans—myself included—accept as Batman. He’s been Batman longer than anyone, ever, and even though he’s never donned the cape and cowl, his voice is instantly recognizable. Harley Quinn is voiced by an actress named Hynden Walch, and I can hear no difference between her vocal performance and the one given by the original Harley, Arleen Sorkin. Character actor Neal McDonough (The guy who plays Dum Dum Dugan in Captain America: The First Avenger) lends his voice to Deadshot, and C.C.H. Pounder voices Amanda Waller, the government official who recruits the team. I like what these people bring to the table. 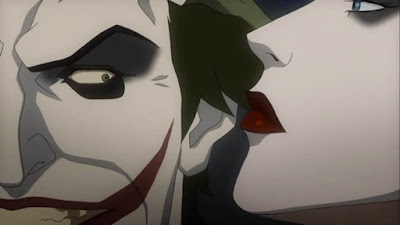 Unfortunately there’s a downside, most notably the absence of Mark Hamill as The Joker. Just as Kevin Conroy is the definitive Batman voice, Hamill defined The Joker and gave the character a distinct personality that has been often imitated. Unfortunately, that’s what we get here, as Troy Baker does his best Mark Hamill impression. The characterization is great, but it’s a shame Hamill couldn’t or wouldn’t return. He’s said that the upcoming animated version of The Killing Joke (OMG, I can’t wait) will be his last performance of the character. Pour some out for Hamill, y’all. This movie also features The Riddler in a minor role, and I am not at all a fan of Matthew Gray Gubler does with the vocal performance of the character. I’m also not a fan of the stylistic approach to the animation, with everything appearing hazy and diffused. This approach seems influenced by trends in anime, but this isn’t anime and I’ll never understand why anyone would deliberately muddy up a perfectly crisp image. It feels like there’s sunlight shining on your television, even if you’re watching it at night. Ugh. Close the curtains, I’m watching a movie here!

The two directors of Batman: Assault on Arkham are Jay Oliva and Ethan Spaulding, both of whom have helmed several less than stellar previous DC Animated Universe projects prior to this one. I think a big key to my appreciation of this one is owed to the writer, Heath Corson (no relation). In addition to this animated film, he also wrote both of the Ultimate Batman features that I liked so much. I like his approach and I appreciate the fun and levity he brings to the table. WB has shown that you can absolutely make entire movies like this without ever once getting into the heads of the characters or providing proper pathos or motivation. That creates a movie with a surface plot that’s nothing more than an excuse for one action scene after another. Sometimes that’s FINE (it’s really not), but Corson seems eager to play with the characters themselves and show how different they are from each other and how nuts they are. His script seems steeped in a love for the comics and characters that populate them, and I love the finale of this movie because it’s practically a tribute to the Batman universe. 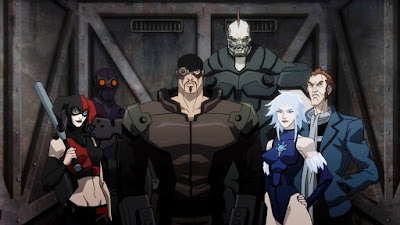 Those who find themselves eagerly anticipating this summer’s Suicide Squad might enjoy checking this movie out as a primer for the characters and the idea of the team as a whole. While there are sure to be some differences between this and the forthcoming theatrical film, Batman: Assault on Arkham definitely captures the essence of the team as it exists on the printed page. It’s a fun story that doesn’t shy away from the adult themes of the comic book (sex and violence, anyone?), but also remembers that this kind of story is supposed to be FUN with a capital F. There’s a line where The Joker bursts into a room with his guns held high and yells “I’m here, bitches!” Where else you gonna see that?! After feeling so burned out on these animated movies because most of them have started to feel exactly the same, it’s great to see one understand that something doesn’t have to be joyless just because it’s aimed at an older audience.