I want to like this movie so much more than I do.

Oh, Empire Records, I have tried SO HARD. You’ve tried too, I know. You wear your heart on your sleeve and make me feel like youth is everything. You value integrity and purity and condemn poseurs and those who aren’t following their heart. You’re naïve, Empire Records, but it’s such a sweet naivety that I can’t help but root for you and want you to succeed. You make being indie so cool! Or you try to, anyway, and I’m giving you MAJOR kudos for the effort. You also occasionally embarrass yourself by going to far and not understanding who you are, but we all do that sometimes. That’s why I try so hard to like you. Some of my friends don’t understand what I see in you and I find myself sticking up for you, even though I’m not always sure why. I think it’s because I know you mean well. You don’t want to hurt anybody; you just want to have a good time and enjoy youth while it lasts.

On paper, I should be all over Empire Records. It’s a movie (I love movies!) that puts tremendous importance on music (I love music!) and a struggling independent record store (I shop at those!). Shouldn’t a music-driven movie about a bunch of rebellious misfits trying to save the independent record store where they work from becoming part of a corporate buyout in the mid-‘90s be right up my alley? I feel like it should, but something just doesn’t click with me. If I’m being completely honest, I was never able to fully get behind the alternative movement of the 1990s because it killed the music I loved. I was still rocking out to Def Leppard and Bon Jovi when bands like Nirvana and Pearl Jam put a nail in the coffin of hair metal, and I was pissed off about it. It wasn’t until years later that I was able to remotely enjoy alternative songs like those featured in Empire Records. As much as I can appreciate groups like Cracker, Better Than Ezra, and the jangly pop confections of The Gin Blossoms now as an adult, the teenager I was in 1995 wanted absolutely nothing to do with any of it. I wanted to rock and roll all night and party everyday (OK, I still do) and there was a distance between my life and the life of the kids that worked at Empire Records. 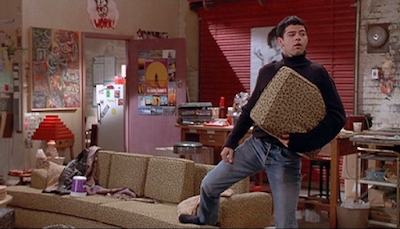 The movie has an outstanding cast, but it undermines them with weird little bits and odd choices that detract from the movie’s credibility. So many of these actors were on the cusp of success, but didn’t find it with this movie. Rory Cochrane was a star in the making after his turn in Dazed and Confused, and this could have been the movie to launch him into the stratosphere. Renee Zellweger had just been in in Texas Chainsaw Massacre: The Next Generation with Matthew McConaughey, but she didn’t break through until Cameron Crowe cast her in 1996’s Jerry Maguire. Anthony LaPaglia frankly deserves better than serving as a lookalike for the lead singer of Creed, and I think he’s outright miscast. Liv Tyler, who I’ve had a crush on since she appeared in her dad’s band’s video for the Aerosmith song “Crazy,” could have become America’s sweetheart with this movie, but she would have to wait for Tom Hanks to cast her in a better vehicle the next year with the near-perfect That Thing You Do!. Ethan Embry (as Ethan Randall) also seems somehow out of place with his unique brand of awkwardness, though Tom Hanks saw enough in him to cast him in That Thing You Do! too. Wait a minute…did Tom Hanks watch Empire Records and decide that the cast deserved better? Does That Thing You Do! exist because of the shortcomings of Empire Records?

I just don’t think most of Empire Records works like it should. We’re supposed to invest in these kids who work at this independent music store and value their fire and passion while indicting “the man” (DAMN the man), but the movie doesn’t really give us much of a reason to do so. It tells us that Rory Cochrane is irresponsible and more concerned about his image than his job, that Renee Zellweger is a slut, and that Robin Tunney is so depressed and angry that she’s on an island of her own making. If we’re supposed to be rooting for these characters, shouldn’t they do things to make us like them? Ethan Embry might come the closest to pure puppy dog status through his weird, wide-eyed wonder at literally anything and everything. Liv Tyler has the same sweetness that she brings to everything she’s in (she’s on par with Kate Hudson in the “purity of heart” category), but she just doesn’t have enough to do.

The real culprit is probably the writing. The screenplay comes from Carol Heikkinen, who wrote The Thing Called Love and Center Stage. The dialogue feels contrived much of the time. It comes across as self-important and far too clever to be coming from the mouths of the characters that deliver it. Furthermore, the situations that the characters find themselves in just aren’t that compelling. The main plot is serviceable enough, but there’s just too much randomness going on. There’s a shoplifting subplot that ends with the kid pulling a gun. There’s a subplot about a music superstar called Rex Manning, but I can’t invest in it because his music sucks. I can’t suspend my disbelief that anyone would listen to Rex Manning in real life nor that these kids would care about him. In another part of the movie, a character glues a bunch of quarters to a flat surfaces for no apparent reason other than to have someone ask him about it later so he can answer with a groan-inducing pithy comment. NO ONE really talks like these characters. You know how Joss Whedon has his own language and how it feels alive and crackling with electricity when the right people deliver it? This is not like that at all. We must also lay some blame at the feet of the director, Allan Moyle. He’s exhibited talent for this sort of thing before with 1990’s Pump Up the Volume, but something must have happened on the way to Empire Records.

Yet Empire Records somehow still manages to coast by and be totally FINE. I can punch a million holes in this thing, but I can’t quit this movie. I think a lot of the credit for this is on the shoulder of the really great cast who thrives and somehow manages to outshine the material, but I also think one of the reasons the movie manages to breeze along is because it’s just too innocuous to make any real waves. Its curse and its salvation is that it’s light and works when it’s in the background. Put it on and do something else so you can look up occasionally to see what’s going on without missing much. You might miss the scene where Renee Zellweger obviously lip syncs on the roof of the store building, but you should be thankful for this. 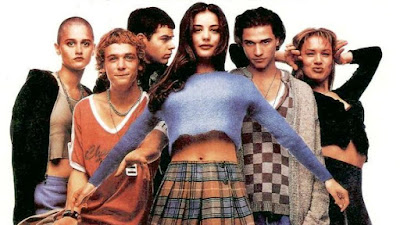 As I said at the beginning, I want to like it so much more than I do. A good movie can make you care about things you aren’t interested in, but this is a movie FILLED with things I’m interested in and I’m still just kind of like “hrrrmm.” I can’t help but feel like Empire Records could have and should have been the touchstone for the mid-‘90s that a generation could identify with, and could have been influential and beloved Dazed and Confused. To its credit, it’s become something of a cult classic. There are people who LOVE this movie, dress up like the characters, and have parties for Rex Manning Day. I am jealous of these people. Also, it’s a snapshot of a time not that long ago but forever gone; the idea of an independent music store fending off a big chain music store seems quaint now because all the big guys have closed their doors for good. Surely Empire Records has merit as a time capsule? Plus, how can you be down on a movie that tries SO HARD? It’s because it tries so hard that I cut it a lot of slack and have such a soft spot for it in spite of all the shortcomings. I do not think it is what it wants to be, but in failing to be that thing it becomes something else. I’m just not quite sure what that other thing is. Whatever it is, it isn’t the greatest, but it’s not the worst either. That’s my half-hearted recommendation: “It works really hard not to be the worst.”