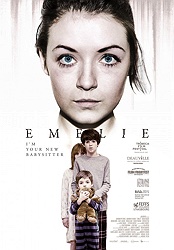 This is why you always ask for references.

The 1990s saw a real influx of "_________ from hell" thrillers, no doubt kicked off by Adrian Lyne's "mistress from hell" blockbuster Fatal Attraction in the late '80s. Since then we've been treated to girlfriends from hell and boyfriends from hell and ex-husbands from hell and roommates from hell and secretaries from hell and nannies from hell and neighbors from hell but few babysitter from hell movies, which is surprising because those movies (like nanny movies) speak directly to our anxieties about allowing our children to be around strangers and how to keep them safe at all times. For a time, these fears are directly exploited by Emelie, the new indie horror/thriller from director Michael Thelin and screenwriter Richard Raymond Harry Herbeck. There are scenes in this movie that are hard to watch no matter who you are or what your background, but especially hard if you have kids. Or hamsters.

Sarah Bolger plays the title character, a babysitter hired at the last minute by a couple (Chris Beetem and Susan Pourfar) when their usual babysitter flakes out on watching their three kids while they have dinner for their anniversary. She does all the usual babysitter stuff like playing favorites, psychologically torturing the kids, showing them a sex tape and raiding the fridge (probably). Eventually the kids start to figure out that something might be up with Emelie. What do you think tipped them off? 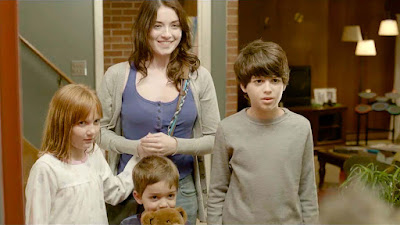 From its excellent opening shot, we are told that something is off in the world of Emelie. The movie's greatest achievement is that it is able to sustain a level of confused tension and unease through at least half of its running time -- we know that something is very, very wrong but we're not entirely sure what. The fact that children are involved only makes things that much more uneasy, and the film's willingness to go to some very dark, very fucked up places in the head games that Emelie plays makes us think there's no place the filmmakers won't go. We're never totally in danger, but we're never really safe either. To describe exactly what Emelie does both in front of and to the children would mean spoiling some of the more unsettling moments, but needless to say it's a lot of stuff I haven't seen played out in a movie before.

The lead performance by Bolger goes a long way towards selling the material. She's had recurring roles on both The Tudors and Once Upon a Time, both TV series of which I've never seen a single episode. To me she's still one of the adorable Irish daughters from Jim Sheridan's In America. That means that Emelie is my first big exposure to her acting as an adult. She's great. Bolger gives her character a shell of normalcy constructed to pass in the real world while slowly peeling back the layers of weirdness and damage beneath, and it's only when the screenplay starts filling in the gaps better left unspoken that we can really start to pin the performance down. To her credit, though, Bolger always plays to the reality of the character, never turning overtly "crazy" or acting as though she knows she's the villain of this story. The bad guys don't always know they're the bad guys. 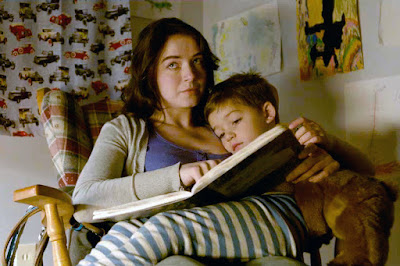 This is the first narrative feature from Michael Thelin, who has a long resume of live concert films and shorts to date. He does a good job building the tension and using the geography of the house to his advantage, letting us know where we are in relation to the other characters most of the time. The movie gets a lot of mileage out of where it places its players -- when and how they come together and (even more so) when and how they spread separately throughout the house. Why the movie feels the need to constantly cut back to the parents' date, then, I cannot say. It adds very little other than a constant reminder that they are unaware of the danger their children are in, but this is something that could be established by one scene. Returning to their dinner again and again with no real payoff is a mistake.

Ah, but Emelie makes a number of weird choices when it comes to payoffs. After almost an hour of mounting dread, the movie tosses what it has built aside for a limp finale. It is considered a sign of laziness for critics and studio executives to claim "third act problems" when discussing why a movie doesn't totally work, but sometimes there's just no better way to describe it. Emelie fails to build on the promise of its first two thirds, with Emelie's grand design coming into focus in a way that's unsatisfying and the kids' parents being brought back into the larger narrative despite it not making thematic sense. This isn't a movie about parental powerlessness because the adult characters spend almost the entire film completely clueless about what's really going on. To try and abruptly shift from the perspective of the kids (who really are in the shit) to the parents is dishonest and ineffective. 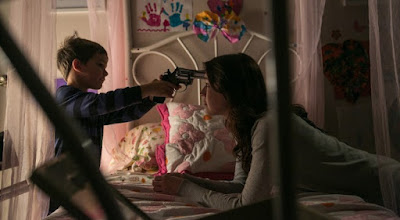 Despite whiffing the finale, there's enough good going on in Emelie to be worth a look for fans of this kind of smaller indie horror. Even the last third has its share of strong moments, including the weirdest and most powerfully intense self-sacrifice this side of Let the Right One In. Bolger's performance and a darkly off-putting first two acts are major strengths, and while a disappointing and deflating climax will keep the movie from lasting my memory for very long, not all movies need to occupy space. At only 80 minutes -- at least 50 of which are solid -- Emelie just needs to come into our homes, keep us occupied for a little while and then go home and back to her own life. You know, like a babysitter is supposed to do.