We are all interested in bad movies, inexcusable cinema, worse-than-mediocre pictures, for that is the stuff we use to fill our lives when we are not cavorting around in the altogether. You are interested in the unknown, the mysterious, and the NUDE—that is why you are here. And now, for the first time, we are bringing to you the full story of some of the worst movies ever made. We are bringing you all the evidence, based only on the naked testimony of the miserable soul who survived a screening. I am that miserable soul. The absurdly low budgets, the hypochondria, the ridiculous plots, the inane dialogue, the unclothed bum-bums—my friend, we cannot keep these a secret any longer. Let us punish the guilty. Let us reward the innocent. Remember, my friends: terrible movies such as these will affect you in the future!

It made me… let’s say “happy”… that I was able to finally screen Unashamed, a nudist camp film from 1938. I had first read about the film in Eric Schaefer’s seminal book, Bold! Daring! Shocking! True!: A History of Exploitation Films 1919-1959. Later I remember reading a much more in-depth essay in Film Comment, which focused on the film’s racial politics. 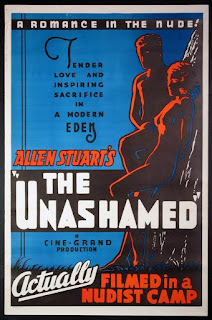 The Plot In Brief: Rae Lane (Rae Kidd) is concerned about her boss Robert Lawton (Robert Stanley) and his obsession with sickness. Robert has been to every quack doctor and taken every miracle cure, all to no avail. Rae harbors a secret crush on Robert and wishes he could overcome his hypochondria and his seeming aversion to her “dark-skinned features.” Benevolent Dr. Malvin suggests some time in a nudist colony would do Robert a world of good. Robert takes this advice and upon arriving at the camp is surprised to discover Rae, a longtime member. Free of the stress of the workaday world and all of his clothes, Robert abandons his many medications and begins to heal. Robert and Rae are the cutest couple in camp. They do everything together in the nude: swimming, golfing, playing volleyball, and practicing archery. Careful with those arrows, sister! 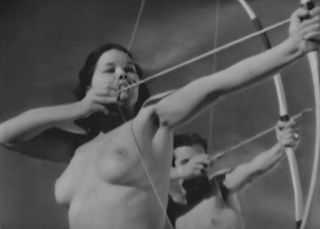 Heiress-on-the-run Barbara Pound (Lucille Shearer) hides in the nudist camp to escape police detectives. Barbara is blonde and pale. Robert develops a crush on Barbara, and they begin to swim, golf, volley, and archer together in the altogether. This literally leaves Rae out in the cold. How will this nekkid love triangle/early civil rights battle be resolved?

In much the same way that the narrative of Unashamed sets up a dramatic conflict between “clothed and unclothed” and “light skinned and dark skinned,” the film itself wages a battle… with itself. At F This Movie!, we have often discussed movies that fight themselves; Bridesmaids is a good example. Half of Bridesmaids wants to be small, winsome, and well observed (Kristen Wiig bakes herself a cupcake) and the other half wants to be a literal Judd Apatow gross-out shit-fest (with bridesmaids literally shitting in sewers and sinks). Unashamed exists because, since film began, there has been a market for nudie films; but in the late 1930s, there were very few ways to get them made, much less distributed. While people would pay money to see T & A, the only legal way to provide it was to cloak the film in a protective covering of “societal exposé” and “redeeming social importance.” This film was not made for nudists—in fact, nudists at the time expressed their distaste for the film, claiming it was unrealistic. Yet the dubious premise of a nudist camp and its supposed health benefits allowed the filmmakers to give the public what it wanted. 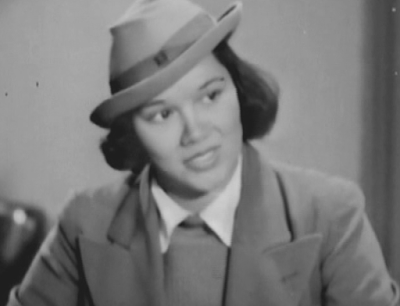 Screenwriter William Lively, director Allen Stuart, and the cast of Unashamed clearly do not understand (nor wish to acknowledge) that they are making an exploitation film for lonely gentlemen. They clearly believe they are making a serious drama about alternate lifestyles and the destructive effects of racism; everyone in the film just happens to be naked, that’s all. In some ways the filmmakers are successful beyond their wildest dreams. Like the residents of the nudist colony, we viewers begin to take the nudity for granted as well. It quickly becomes no big deal. This seems opposed to the reason the film exists. Unashamed may be the least sexy “sex” film ever made; no sexual activity of any kind is ever shown beyond a chaste hug and kiss.

Want more proof? (MASSIVE SPOILERS FOR UNASHAMED) At the end of the film, the character of Rae Lane, distraught because she believes that she has lost Robert’s love for good, climbs to the top of the highest peak at the nudist camp—and JUMPS. This might just be the only “nudie cutie” film to end with the cutie committing suicide. And Rae, as the female lead, is arguably the most sympathetic and attractive character in the film! Talk about a good old-fashioned 1930s boner shrinker. (Or in the parlance of the time, “it puts the kibosh on the ol’ palooka-paddle.”) 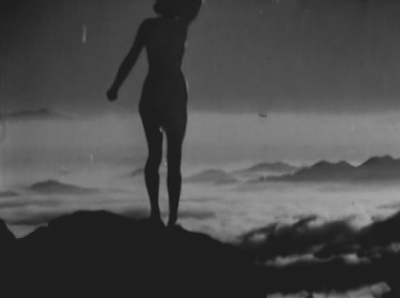 A Word on the Ventriloquist: Because the dubious adventures of some profoundly bland characters in a nudist camp could not sustain this narrative for its paltry 66 minute running time, the filmmakers have seen fit to pad the film with endless footage of a nudist camp ventriloquist named Dad McGillicuddy. Of course, his clothing-optional dummy is named Woody. I am not making this up. The dummy is scary-looking (because that is what ventriloquist’s dummies are best at), makes bad jokes, and leads the entire camp in raucous sing-a-longs. If we need further proof that truth is stranger than fiction, in real life Rae Kidd, the star of Unashamed, went on to marry actor Rosslyn J. Cowen (billed here as Ross Lynn), who played Dad McGillicuddy. They had five children together before divorcing in 1950. I wonder if their children were ashamed of this film. Did Dad (aka “Dad”) bring Woody out of his trunk to entertain the children at birthday parties? That sounds so wrong, on so many levels, that one must only suppose it HAD TO HAVE HAPPENED. 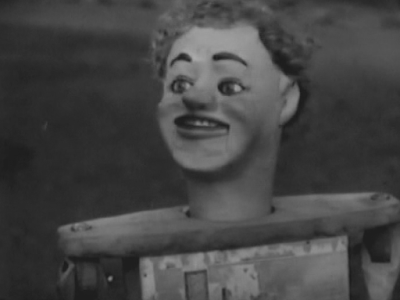 According to our friends at the IMDb, Unashamed was literally “banned in Boston.” According to one Boston newspaper report of Jan. 2, 1939, "Descending on the newsreel theatre in Huntington Ave. an hour before the first scheduled showing of a nudist colony film at a holiday midnight show, police blocked the running of the picture, titled Unashamed, it was disclosed today. A New York group, which had leased the theatre for the advertised showing of the film for a week, was ordered not to run it by Captain Thomas F. Harvey of the Back Bay station after he had learned that John J. Casey, city censor, had not seen or approved the picture. Police appeared at the theatre as the regular Sunday night show was ending and as persons planning to see the nudist picture were gathering outside. As a result the midnight show was called off and the prospective patrons turned away."

My friend, you have now read this column, based on my own sworn testimony. Can you prove that this film doesn’t exist? Perhaps on your way home, someone will pass you in the dark, and you will never know it, but he or she will be UNCLOTHED and UNASHAMED. Perhaps it will be a clothing-optional ventriloquist’s dummy. Many scientists believe that bad movies are being filmed at this very moment. We once laughed at air baths, the wheel, gravity, the horseless carriage, the telephone, the electric light, and golfing in the nude. So much laughter! And now some of us laugh at very bad movies. God help us in our naked future.