Look for the bare necessities.

The 1967 Walt Disney Productions version of Rudyard Kipling’s The Jungle Book is noteworthy for a variety of reasons. It was one of only three animated films made by Disney during the 1960s (after 101 Dalmations in 1961 and The Sword in the Stone in 1963). It was the first film to feature celebrity voice casting, calling upon the talents of comedian and bandleader Phil Harris, jazz musician Louis Prima, and noted actor George Sanders. But most importantly, The Jungle Book was the last animated film to be personally overseen by Walt Disney himself before his tragic death and therefore marks the end of an era.

The plot would be dangerously thin in almost any other movie: Mowgli is a human child in India who has been discovered in a basket by a panther named Bagheera, who soon recognizes that the boy faces great danger the longer he stays among the animals. Bagheera must get Mowgli back to the safety of his own kind before he’s discovered by the tiger Shere Khan. What this loose plot allows is plenty of character moments, and it’s the character moments that make the movie. Kipling’s original setting of India during The British Empire’s reign is intact, with the animals representing different Imperial roles (elephants represent the British military), but it’s all more or less pushed into the background in favor of bits and songs. It turns out that one of the great strengths of the movie is the liberties it takes with the source material and the extra time we get to spend with the animals that Mowgli encounters on his trek. There’s also a sense of fun and adventure that wasn’t found in previous Disney animated movies, which traditionally seem to aim for something very different. The Jungle Book just wants us to have a good time and “forget about your worries and your strife.” For most of the movie, it’s simply the story of a bear and his boy. 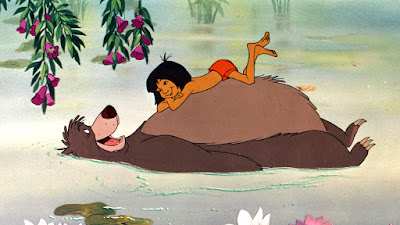 Lucky for us The Jungle Book is packed with memorable personalities that make it easy to relax and go with the flow. Chief among them is Baloo the bear, voiced by a Phil Harris, an unconventional choice. In my opinion, Baloo is one of the absolute gifts of 20th century animation. He’s full of personality and life, and his signature song “The Bare Necessities” is one of the all-time great good-time songs that sets up shop in your head for days any time you hear it. It makes perfect sense that the animators who spent the most time bringing Baloo to life are Frank Thomas and Ollie Johnston, two men who started working for Disney in the 1930s and were among the legendary “Nine Old Men.” They understood what it meant to bring two-dimensional drawings to life, and they make Baloo feel real to us through his fluid movements and realistic facial expressions. Disney animators and historians consider this movie to be the crowning achievement of Walt Disney Animation; every character in The Jungle Book leaps off the screen with fluidity and realistic movement, but Baloo might be the benchmark by which all other animated characters should be judged.

The other standout is Louis the orangutan, king of the swingers. Louis Prima voices the character with the same jazz cool that he brought to his raucous recordings and performances, and the segment that he features in has been my favorite ever since I first saw the movie as a kid. The song “I Wan’na Be like You” is just amazingly catchy and fun with the call-and-response scatting section and the vocalized trumpet noises that Prima’s band members made with their mouths. According to the behind-the-scenes information, the original performance of the song was so rowdy that it had to be toned WAY down before it could be inserted into the film. King Louis is only on screen for a few minutes, but he nearly steals the movie. I have always associated King Louis as being the coolest of the cool. 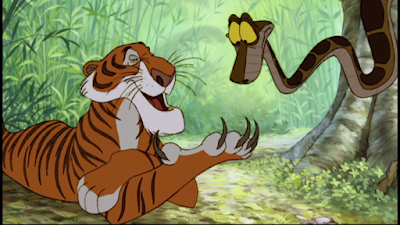 Every animal in the jungle feels completely fleshed out and full of personality. Shere Khan is the typification of an English noble, radiating authority and power. He’s animated in such a way that he conveys arrogance and superiority without even saying a word. Kaa the snake is excellently voiced by Sterling Holloway, the actor who brought Winnie the Pooh to life. Here his high, raspy tones take on a menacing, hypnotic quality, something that shouldn’t have worked, but completely does. Even the four Brit-pop vultures that appear near the end of the film and sing a song feel completely formed. The Beatles were originally supposed to give voice to the four birds; their song was meant to be a rock and roll number, but they backed out due to their schedule and John Lennon’s distaste at the whole idea. This caused the song to be reworked and the vultures to be slightly re-designed. Here’s another Beatles/Disney connection just for fun: John Lennon signed the paperwork that finally disbanded The Beatles in 1974 while on vacation at Disney’s Polynesian Village Resort at Walt Disney World.

Further lending life to the story are the great songs from The Sherman Brothers. Robert B. and Richard M. Sherman are responsible for a massive amount of Disney hits including those from Mary Poppins, the theme from The Many Adventures of Winnie the Pooh, and earworms from the parks like “It’s a Small World (After All)” and “There’s a Great Big Beautiful Tomorrow.” They even wrote the song “You’re Sixteen” which can be heard in American Graffiti and which Ringo (another Beatles connection!) later covered and took to number one. Ironically, the only song the Sherman Brothers DIDN’T write for The Jungle Book is “The Bare Necessities,” undeniably the breakout musical number of the film. That one is credited to Terry Gilkyson, who was working on an earlier version of the movie before Walt steered the production into the different, lighter direction we now see. Still, those Sherman Brothers songs, along with almost everything else they wrote, are so catchy and memorable that they’re like Christmas carols. Their contribution to this movie cannot be downplayed, because it’s a huge part of the magic. 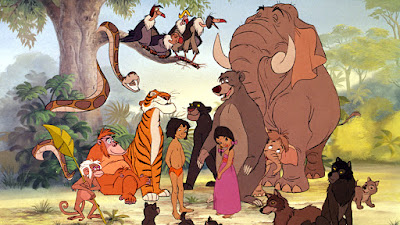 The Jungle Book is a really special movie. Because it’s more of an adventure with friends in the jungle than a moving fairy tale, there’s an approachability to it that isn’t present in other entries of what we now consider classic Disney animation. It also reflects the changing times in culture, and what audiences wanted in 1967 wasn’t the same thing they had wanted even a few years before. Sadly, Walt’s passing really does mark the end of the traditional Disney film as we know it. There would eventually be many more cinematic hits, but none of them would benefit from Walt’s leadership and extremely high standards of excellence. Happily, The Jungle Book was a massive success both critically and at the box office, and audiences flocked to see Walt Disney’s final animated project. The film holds up like gangbusters to this day, and no other movie in the Disney canon has managed to capture the vibe that The Jungle Book does so well.