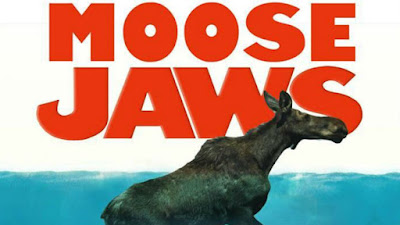 Saskatoon, Saskatchewan. Say that ten times fast and you'll most likely wind up with a headache or mumbling something along the lines of Sasaskatawoo.

I love where I live. LOVE IT. I will in no way break down the history of our beautiful province; suffice it to say, its beautiful cities and small towns are full of picturesque streets, historical buildings and eerie settings. Many a director has come here for location scouting and chosen small town Saskatchewan as the backdrop of their film..

Perhaps the eerie setting of many of our small towns acts as a beacon to filmmakers of my favourite genre, because as I was going through the possible films to write about for this, I found myself almost inundated with horror and thrillers from the 2000's. Hooray! I had initially intended to include a couple from various genres, but my heart has steered me in a whole different direction so Corner Gas: The Movie, Just Friends, Sleepwalking, The Unsaid, Space Milkshake and Without Malice will just have to live with this brief mention. 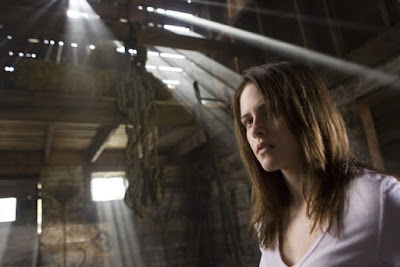 First up, the Sam Raimi-produced The Messengers (2007). Filmed in Regina, and our beautiful Qu'Appelle Valley, this horror-thriller is essentially a post-The Grudge plug-along haunted house film featuring Dylan McDermott, Kristen Stewart and all the crows you could ever want. And I mean ALL the crows. I have a tendency to avoid Kristen Stewart at all costs, as I feel she is as relatable as a cardboard box, so to be honest, I only watched it because it was filmed here. I would suggest skipping the movie and coming to visit our beautiful province instead.

Listen, I didn't promise they were all going to be great movies, did I?

Surveillance (2008), directed by Jennifer Lynch. Filmed in the grassy plains surrounding Regina and in one of my favourite “small cities” (Moose Jaw), this independent horror-crime-thriller stars Bill Pullman, Julia Ormond, Ryan Simpkins and several well-known comedic actors playing it straight. With her combination of visual brutalities and eccentric characters and establishment of surreal tone, it's not hard to see why Lynch won for Best Director at the New York City Horror Film Festival (the first female to do so!). 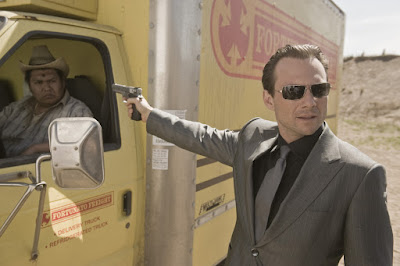 Dolan's Cadillac (2009), directed by Jeff Beesley. Christian Slater does as the Slater do in this movie based on the short story by Stephen King. (I have always enjoyed Christian Slater in all his roles and this is no exception.) What I love most about Stephen King and his many adaptations is that there are underlying elements from other stories that always seem to intertwine, and in this movie the Dolan character shares some qualities with another dude, a Walkin' Dude from one of my favourite King tales. (Filmed in Regina and Moose Jaw... Can you tell these two cities are but 45 minutes apart?)

Another film from 2009, Walled In, was filmed in Regina and stars Tim Allen and Mischa Barton. I enjoyed it for the most part. I seem to give almost every horror a chance, but as is the case with more and more films that seem to find their way into my life lately, the ending does it's best to ruin the movie for me. Booo.

A few years ago, our provincial government eliminated our film tax credit and it hit our film and television industry hard, therefore resulting in fewer foreign filmmakers choosing our province as the setting for their next project. In fact 35% of our local filmmakers had no option but to close down and move out of province to continue their work in the industry, while many of those who still maintain a home-base in Saskatchewan do a lot of work outside the province.

But you know what will kick any government's ass?
Werewolves. 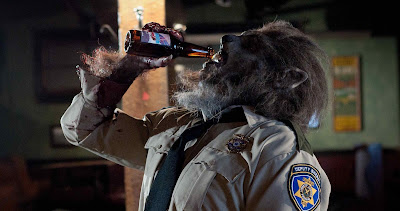 Wolfcop is one of my all-time favourite Saskatchewan-made films, and this dick-first transformation werewolf flick has clawed its way to my top five werewolf movies, and warrants all the love I can throw its way. Filmed entirely in Saskatchewan, in both Regina and (you guessed it) Moose Jaw, the soundtrack is 76 minutes of original music composed by Saskatoon's own instrumental heavy psych band, Shooting Guns.You can read Patrick's review of it here!

Let's end this on an anticipatory note with Kevin Smith's upcoming third installment in his True North Trilogy, Moose Jaws. He was in (yep, you guessed it) Moose Jaw a couple months location scouting for this film and all I can say is if it goes the route of Tusk, I for one will have a continuous inner battle over my love/hate/love of it. How could this be anything but golden, though, when the premise is described by Smith as “very simply Jaws, but with a moose instead of a shark.” Moose are but our giant, all-legged, gangly, awkward teenage-looking animals, so if I might put in my two cents: a herd of zombie moose that are taking over the continent would be a perfect brief plot outline alongside the title of the film.

Saskatchewan, land of living skies and where many horrorific dreams are brought to life through the magic of film.
Posted by Patrick Bromley at 5:00 AM