It all comes back around.

If you’re a movie fan, it’s just a matter of time before you start to see the cyclical nature of the entertainment business. Nostalgia seems to operate on a 20-30 year cycle, but the entertainment cycle is even shorter than that, and seems to be shrinking by the day. When I first noticed it, the entertainment cycle was about ten years and you’d start to see the same stuff popping up every decade or so. Did you see that movie about the awkward-but-upwardly-mobile-career-woman who worked for that horrible boss and was in love with the co-worker who had attractive qualities mixed with some pretty noticeable character flaws? What about the thriller where that one guy had been accused of something he didn’t do and had to clear his name before time ran out? You can probably think of at least a few movies that fit these profiles, because just like the horses on a carousel, it all comes back around.

A while back, I had intended to write a piece comparing the various movie versions of the gunfight at the OK Corral. It seemed like it was going to be an easy task, because I thought there were just a handful of movies on the topic. The further I got into my research, the more movies I kept finding. By the time I finally gave up, I’d discovered over two dozen movies spread across the entire history of cinema. Every era of movies had their own version of the story, and there were even some that had nothing to do with the actual gunfight at the OK Corral, but had borrowed the story and put it in a new setting. I may still get to that column, but I probably won’t because there are just too many movies to wrap my arms around. 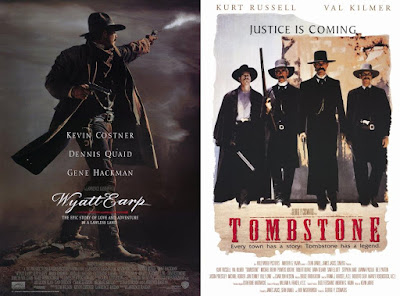 It’s probably only a matter of time before you see a movie that reminds you of another movie you saw in the past. Sometimes the premise is similar and sometimes it’s almost exactly the same. An example: not that long ago I watched a James Cagney movie called The Bride Came C.O.D. in which Cagney is a pilot who crashes in the middle of nowhere with a woman he can’t stand. Over the course of the movie, they start to work out their differences and discover an attraction they didn’t know was there. Have you seen Ivan Reitman’s Six Days Seven Nights? These two movies are almost exactly the same. It all comes back around.

Things are no different now that we find ourselves in a world of franchises, where Spider-Man gets three unique approaches in a nine year span. These days, if a franchise entry doesn’t work, you just reboot and start again. I used to be really bothered when I would see someone recycle the same concept or idea of an older movie until I realized that there just aren’t that many ideas. I can’t even get mad about all the superhero sequels and reboots because OF COURSE the studios want to revisit things that worked or try again on something that failed. I can’t blame them. The more perspective you have, the more you realize that each time a movie tackles a well-worn theme or scenario, it’s just the latest attempt in a long line of attempts. If this one isn’t for you, you’ll likely see it again down the road and maybe THAT will be the one that clicks with you. They’ve been making and re-making the same ideas since before Hollywood was even a thing. They’ve been recycling successful concepts and overhauling failed ones. It’s just a big carousel of entertainment. Pick your horse and enjoy the ride. Trends come and go, but it’s all cyclical. If you wait long enough, your horse will come back around. 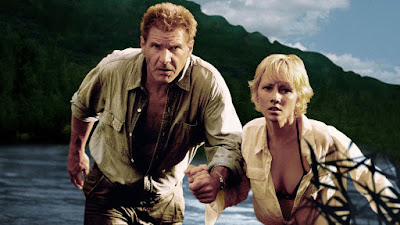 Here’s where I’m going with this: if every idea gets made over and over again, perhaps it’s less important WHAT the movie is about than HOW it is about it.

I’m coming to a place where I’m not bothered by similarities in my entertainment anymore. I’m not upset that Marvel Studios has movies scheduled through 2020 even though nobody knows if we’ll even want them by then, or that three more Transformers movies have been greenlit even though nobody demanded this. No, what I’m more concerned with now is how each new director or screenwriter will approach these projects. What is it that they’ve got to say? Does their entry make the movie landscape better or worse? Most importantly, do I feel like they gave it their all? I can name the flaws in Avengers: Age of Ultron and talk about how the studio muddled up the director’s vision, but I can’t fault director Joss Whedon because he clearly left everything he had on the screen. I can see his passion and his fatigue. On the opposite end of the spectrum, is a movie like Star Trek: Into Darkness, a movie that literally angers me. My problem isn’t that it copies Wrath of Khan, but that I don’t think the screenwriters and directors are invested in the story they’re telling. They’re going through motions that don’t appear to mean anything to them. I don’t feel any affection for the characters they’re playing with, and I don’t feel any passion in the screenplay. They’ve collected bits and bobs from another Star Trek movie that they know people like and hoped audiences will resonate with these things, rather than giving us a reason to care about what THEY have done.

The real danger in cinema isn’t the lack of originality; it’s a lack of passion.

There will almost certainly always be movies about superheroes fighting for a common cause (and against each other), love gone wrong, love gone right, jilted survivors looking for revenge, opposites who find themselves suddenly attracted to each other, teenagers looking for that one epic weekend, and a few brave men facing impossible odds to achieve something incredible. And if I can feel the heart and the soul of the people that made that movie on the screen, I’ll enjoy each and every one of them, no matter how many times I’ve seen the movie before. Are there too many superhero movies? Probably. Is the bubble going to burst? Eventually, but only for a while. Just like the T-800, they’ll be back. Sooner than anyone expects, I bet. 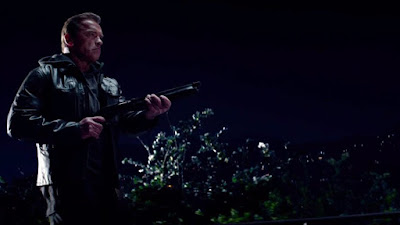 We can’t stop the onslaught of sameness that’s going on at our local multiplex any more than we can change the weather, but we can expect those movies to come to us from a place of passion. But when they don’t, I’m going to try to shrug it off. The beauty of being a movie fan is that there are unlimited possibilities to connect. If one interpretation of a story fails, maybe the next one will succeed. Speak up when something doesn’t work. Demand the best for your dollar. Then take a step back, fix your eyes on your chosen horse, and wait for the next pass. It all comes back around.
Posted by Patrick Bromley at 12:00 PM