Movies I Love: STAR TREK II: THE WRATH OF KHAN 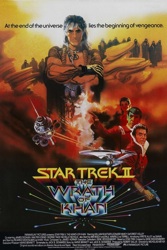 I didn't become a huge Star Trek nerd until a few years ago, but I have always loved Wrath of Khan.

"I have been, and always shall be, your friend."

Ever since Star Trek was revived in the 1970s by a groundswell of fan conventions and syndicated success, Paramount had tried for several years to get a big-screen version of the property made. All attempts stalled, and the studio instead decided they would just create another Star Trek television show. But then Star Wars and Close Encounters made a shit ton of money, and science fiction was suddenly viable again in movie theaters. Paramount reworked some of the many scripts they had (mostly for the Phase II television show) and rushed the movie into production, hiring Hollywood legend Robert Wise to direct. The result was a movie that that went over schedule, over three times its original budget and was met with mostly critical indifference. Luckily, it made enough money ($139 million in 1979 dollars) and had enough of a fanbase that Paramount commissioned a sequel, albeit on with a much lower budget.

Ignoring the turgid majesty that was Star Trek: The Motion Picture, director (and uncredited writer) Nicholas Meyer opted to go back to basics for the 1982 follow-up, combing back through the series and finding who he felt was one of the more interesting villains: Khan Noonien Singh (Ricardo Montalban), a genetically enhanced superman who Kirk strands on Ceti Alpha V following an unsuccessful coup in "Space Seed," a second-season episode of Star Trek from 1967. Wrath of Khan finds the villain still stranded on the planet years later, discovered (once again) only by accident. Shortly after being left on V by Kirk, Ceti Alpha VI exploded and the aftermath threw the ecosystem of V into chaos, turning the planet into a barren, inhospitable wasteland -- the conditions on which eventually kills all but a few of Khan's followers, including his wife. Using mind control on the Federation officers who discover him (including Chekov), Khan steals the U.S.S. Reliant and goes after Kirk -- not just to kill him, but to hurt him...and to go on hurting him... 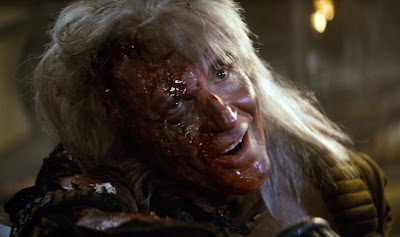 Part of what makes Wrath of Khan so great is that the villain has a legitimate vendetta. Kirk had acted like an asshole, and no one from the Federation ever bothered to check in on the castaways; if they had, they might have learned of the fate of Ceti Alpha VI (and V as a result) and many, many lives could have been spared. Khan's hatred of Kirk is justifiable, and it makes their extended duel that much more interesting -- we don't want Khan to win, but we can at least understand his passion. And Khan is nothing if not passionate; Ricardo Montalban, often considered a bit of a punchline because of Fantasy Island and his "rich Corinthian leather," is SO GOOD in the role, going big but never broad, always staying this side of hammy. He plays the bad guy in a Star Trek sequel like it's fucking King Lear. He's one of the all-time great villains.

That would mean very little if he wasn't evenly matched against Kirk, whose finest outing is Wrath of Khan. Like Montalban, Shatner is often (rightly) accused of overacting. Meyer turns all that against him here, giving him plenty of moments of cocky bravado (his entrance into the film is THE BEST) but pulling it all out from under him. This is a Kirk that is getting older and knows it. A Kirk who finally has to face death. A Kirk who is afraid, not just of what Khan will do but of losing the people he cares about -- including new additions Dr. Carol Marcus and David, who turns out to be Kirk's own son. Shatner doesn't miss a step. Some of the credit goes to Meyer, who deliberately did a lot of takes so that Shatner would stop playing scenes as "the hero" and just start being the character. But the majority of the acclaim belongs to Shatner, a notoriously vain actor who plays the part without vanity. Anyone who suggests that William Shatner is a shitty actor should shut up and watch Wrath of Khan.

Wrath of Khan gets it all right. Gone is the cold, Kubrick-inspired aesthetic of Star Trek: The Motion Picture. The Enterprise bridge is no longer the antiseptic place of the first movie, replaced by warmer earth tones. Even the uniforms have changed from sterile white to deep red -- the blood has been infused back into the franchise. That's because the movie has blood pumping through its veins; everything in Wrath of Khan is deeply felt, because it deals with the biggest, most powerful emotions -- love, anger, loss, revenge. That's not to say that the movie deals only in broad emotional strokes, though. It's part of the greatness of the film that it's told on such a grand operatic scale but manages to find the nuances. Its big emotions are explored through small moments. 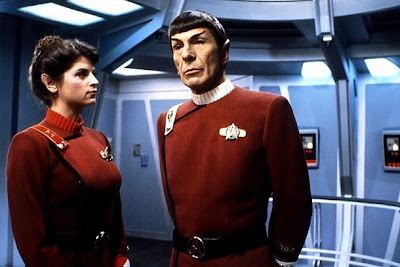 I'm often lamenting in my Heavy Action columns that so few genre movies are made in which the action comes from the characters; more often, it is a function of a screenplay that dictates action beats as a necessity of the plot (or, as is become more and more the case, the marketing department). Die Hard is a great example of an action movie driven entirely by character. Point Break is another. Wrath of Khan is one of the best character-based pieces of science fiction ever. Of course, it has the luxury of using characters that were established 15 years earlier and had been kicking around various forms of media for a decade-plus. But even the longevity of the franchise doesn't automatically mean that the movie would put the emphasis on the characters; for proof of this, just take a look at Star Trek: The Motion Picture, which is much more concerned with "big" visuals than the human beings that occupy the same frame. Even the 2009 reboot -- of which I am a big fan -- doesn't derive its action out of character. If it did, we would have never been stranded on the Ice Planet Coincidence.

For being an adventure movie -- and it's a terrific one -- there's actually very little "action." Think of the climactic battle between Kirk/Enterprise and Khan/Reliant: it's slow and quiet, inspired not by Star Wars but by submarine battles. The excitement comes not from flying spaceships or laser battles, but from character choices. It's not about whether Kirk's ship can outrun Khan's. It's about whether or not Kirk will outsmart Khan. See? Characters and the choices they make. Not special effects. Not second unit stunt work. Don't get me wrong -- I LOVE THOSE THINGS. But if you can make a movie that's just as tense and just as exciting and just as satisfying by focusing solely on character? I will have 10,000 of your babies.

The movie is funny without being jokey. This, too, is a quality that has slowly bled out of our genre movies. Even the big blockbusters that do humor right -- like Iron Man 3 -- will stop a sequence cold so the characters can do a joke. But with Khan, humor comes from the same place it always has -- from the relationships between the characters. It's in the way that Spock tells Kirk to be careful, and an annoyed McCoy responds "WE will." It's in the way that both Kirk and McCoy both notice Lt. Saavik looking foxy but manage to talk around it. The movie is filled with little pieces of business that inform the characters.

Perhaps my favorite of these -- and maybe my favorite moment in the movie -- comes during its tragic climax, after Spock has sacrificed himself to save the Enterprise and its crew. Kirk rushes down to the engine room to find Spock huddled on the ground, quickly dying of radiation sickness. He stands to talk to Kirk, but before he does, he adjusts his uniform and makes sure he looks his best.

Dignity in the face of death. Pride in the Federation uniform. Character. Always character.

Let's talk about that finale. It's what Wrath of Khan is best known for -- being the movie that kills Spock. Nimoy wasn't interested in playing the character again, but producer Harve Bennett was able to talk him into doing the movie with the agreement that Spock would die. His sacrifice is the stuff of legend, imitated by plenty of other genre properties (X2 and even a Next Generation movie, Star Trek: Nemesis, are among the movies that rip it off) but never duplicated. The final exchange between Spock and Kirk is beautiful and sad, made all the more moving because the characters have decades of history together. I can't imagine what it must have been like to see that moment in when the movie played in '82. 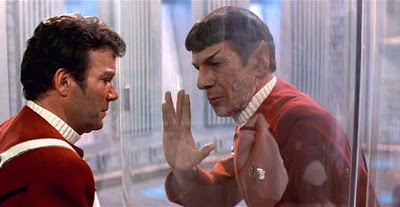 Because its impact is lessened now. We know Spock comes back in the next movie (Paramount told Nimoy he could direct if he donned the ears again), which makes the Kirk/Spock exchange more of a setback than a goodbye. It's still beautifully written and acted, but no longer carries the same weight. The scene still moves me, but it doesn't cause me to break down and sob the way I know it would if it were an actual goodbye to the best character in the Star Trek universe.

That last scene between Kirk and Spock? That's not a Captain talking to his second in command. That's one best friend talking to another. All of Wrath of Khan is like that -- the characters don't relate to one another as crew but as friends. Saavik seems to be on board the Enterprise just so we can see some residual chain of command, but also so that there can be new eyes on board the ship who doesn't understand the dynamic, who doesn't understand the history and who gets to experience it all in a short amount of time. Otherwise, after 15 years together, the crew are friends. They're our friends, too. We have been, and always shall be.

This piece is being published on the day that Star Trek Into Darkness opens in theaters. That's not a coincidence. If I'm right about what J.J. Abrams has in store for his sequel, it's even less of a coincidence.  It will be difficult not to measure it against Wrath of Khan, though I suspect the movie is going to bring a lot of that on itself. That's an impossible standard. Into Darkness doesn't need to be Wrath of Khan, but it does need to put the film's most important lesson into practice: no chase sequence, no space battle, no multimillion dollar set piece means anything if the characters aren't there.

I don't cry at the end of Star Trek II. Instead, I tend to well up during the movie's opening titles. Part of it is James Horner's score, my favorite of all the Star Trek scores. Part of it (most of it) is because I know what's in store for me over the next two hours. I cry tears of joy, because I'm happy to be seeing Wrath of Khan again. I love this movie. 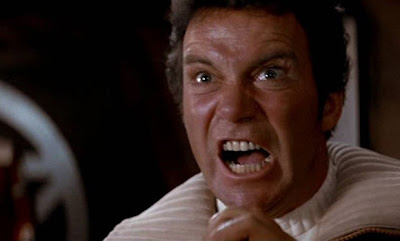 Posted by Patrick Bromley at 11:39 AM