Review: Born to Be Blue 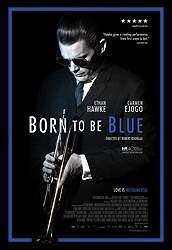 One of my favorite movies of the year so far.

Born to Be Blue, a biopic about the late Jazz legend Chet Baker, was a movie I wasn’t sure I needed. I had seen the 1988 documentary about the artist called Let’s Get Lost and it was tough to get through. Chet Baker was a heroin addict for many years at the time and the experience of watching him on film was depressing. I wasn’t sure I wanted to know more of the Chet Baker story. Luckily, writer-director Robert Budreau’s Born to Be Blue, starring Ethan Hawke as Chet Baker, is just the tonic I needed. I feel it’s easier to empathize (perhaps even sympathize) with Baker when filtered through a narrative than as a free-flowing account. Born to Be Blue is like a single on an album compared to Let’s Get Lost, which is more of a lost track i.e. the deepest of cuts.

A great aspect of Born to Be Blue is that it takes a non-traditional approach to telling Baker’s story than that of the usual biopic, which typically chronicles a rise and then a fall and a rise back again. Interestingly, the Baker story told in Born to Be Blue is mostly about the clean period of the chronic drug abuser’s life and that position makes the story all the more devastating. It has the suspense of a great drama. This is this year’s Love & Mercy in my eyes: another music biopic that eschews the normal way of going about its business and instead delves a bit deeper. For example, there’s a haunting moment in Born to Be Blue where Hawke as Baker describes why he gets high – it makes him happy and it doesn’t hurt anyone other than himself. If only he were more aware. 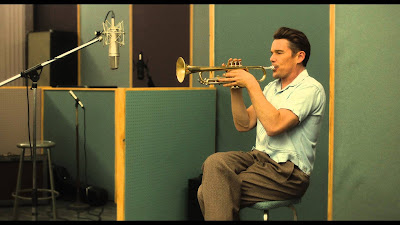 The performance from Ethan Hawke is magnificent. Hawke is an actor I’ve liked for many years but I usually see him as playing Ethan Hawke. There’s nothing wrong with that; I like the Ethan Hawke persona. However, in Born to Be Blue, he so nails playing Chet Baker that I always felt he was the musician and I never thought of him as Ethan Hawke. Is it mannered? Yes, but it works for the film. It’s the best performance of his solid career. Also giving career-best work is Carmen Ejogo as Jane, his longtime girlfriend. Ejogo balances out the Hawke performance in the same way Reese Witherspoon did with Joaquin Phoenix in Walk the Line (this movie is better, although I like Walk the Line) and their scenes together are well-written and keenly observed. I like that Jane has wants and needs of her own and she’s not content to be a doormat to Chet Baker and his demons and career aspirations. It doesn’t hurt that Ejogo is so gorgeous in this movie that it’s almost distracting. I’ve never really thought about her much before Born to Be Blue, but now I’m fully aware of how good she actually is.

On the heels of a Miles Davis biopic, Miles Ahead, soon to be released (I have not yet seen it), it’s interesting to observe that character’s interactions with Hawke’s Baker in Born to Be Blue. In many ways, the film is saying, Baker was chasing the admiration of his peers (whether they be Davis, Dizzy Gillespie or Charlie Parker) and he possibly adopted drug abuse as a means of emulating his idols. The final sequence (which I will not spoil) in particular is shattering in its implications about music and the well-being of artists. I feel like I know more than just the life of Chet Baker by the time the end credits rolled in Born to Be Blue. I feel like I know the soul of the man similar to how you understood everything there was to know about Jake La Motta at the end of Raging Bull. 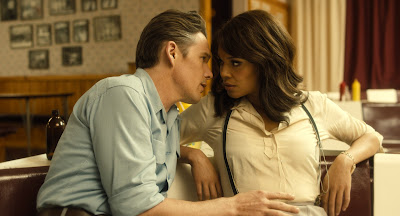 I have some minor nitpicks about the movie, but they’re really not worth getting into (it over indicates some small details with one shot or line of dialogue too many at times) because I keep thinking back about everything that’s good about Born to Be Blue. There are sequences in this movie that I’ve never seen in a music biopic, including a scene where Baker (after being beaten badly by his drug dealer) is trying to play his trumpet again while injured but it causes him to bleed so badly from his mouth that he has to play it in a bathtub. You don’t see shit like that in Walk the Line. I also find myself thinking back on the beautiful jazz music played throughout the film. I’m definitely going to be checking out the soundtrack. I’m not a fan of all jazz music, but legends are legends for a reason.

Born to Be Blue is playing in limited release and is available on some VOD platforms (I saw it on cable VOD but I noticed it’s not on Amazon Instant Video…bummer) and is well worth seeking out. It’s the kind of indie I like – clean and non-showy, just a good story well-told. Born to Be Blue deserves championing. I found it very moving. In fact, I had to take breaks while watching it because I didn’t want the movie to end.
Posted by Patrick Bromley at 12:00 PM