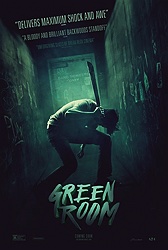 A terrific and brutal bit of business.

Green Room, writer/director Jeremy Saulnier’s follow-up to the magnificent Blue Ruin, is one of the most nerve-wrecking moviegoing experiences I’ve had in quite a long time. I am a fan of horror but the punctuated, short burst of violence in this movie jarred even me. This movie is hardcore. It is, on the surface, about very little, which would be its primary handicap but Green Room is so good at being what it is that this fact really doesn’t matter. Green Room works in similar ways as a movie like The Raid 2. It’s an exercise in violence, but one that is so much of a pure piece of cinema that it becomes unforgettable. I loved this movie even if it makes me want to take a shower after admitting that I love this movie. This is among one of the best “under siege” films ever made. 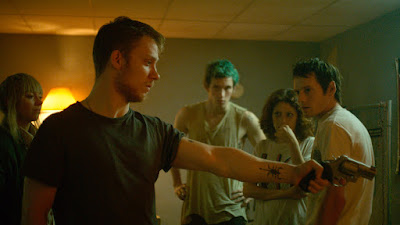 The plot in brief: Following a gig, a punk rock band stumbles onto a murder and become targets of a gang of maniacal skinheads who want to make sure all witnesses and evidence are eliminated. The film stars Fright Night remake alums Anton Yelchin and Imogen Poots (POOTS!) as well as Patrick Stewart as the main heavy. The rest of the cast is made up of a mix of unknowns and familiar faces like Mark Webber, Alia Shawkat and Macon Blair from Saulnier’s prior features Blue Ruin and Murder Party, who is similarly great here. This isn’t a movie of great character moments (though one comes to mind) so much as physical performances (besides Patrick Stewart ,who gets to be very sinister) and the cast is never less than up to the task, especially Imogen Poots (POOTS!) who has never been better. I love saying “Poots.”

One element in which the movie works is that it is universal and immediate. It would be impossible to watch Green Room and not put yourself in the shoes of the punk band, wondering what you would do if you were in their predicament. It makes watching the film a powerful experience which is only amplified by Saulnier’s great technique and choices. The bar where the band is held up looks like a real punk bar, lending to the film’s created authenticity, and the filmmakers imbue the film with a sickly green and black color tone to match the mood they are trying to present. In short, the cinematography (by Sean Porter) and production design (by Ryan Warren Smith) are excellent here.

Green Room reminds me of a recent pair of questions I read posited in a review for another film which are: “Are you sure you should be enjoying this?” and “What does it say about you that you enjoy this?” To this I say yes, you should enjoy this. The movie is graphic and ugly but it also presents a situation where mostly good people (the protagonists, I mean, not the skinheads) fight their way out of hell. In that sense, the movie is oddly inspirational. What it says about me enjoying this is that I want to see people with their backs against the wall find a way to break free from a nefarious situation. The movie is also critiquing machismo in an interesting way I think, too, since the female characters are just as or more successful and resourceful in this situation as their male counterparts. It’s a nice little touch at the screenplay and performance level and even better because the movie doesn’t call attention to it. It just presents that fact as is. 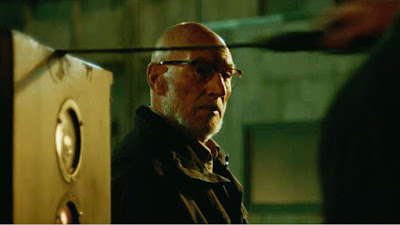 While maybe first appearing to be more of a thriller, Green Room is really a horror movie in my eyes. One of the great things about the horror genre is that it presents scenarios where we can safely stand in other people’s shoes as they go through hell and share their experiences without living them. Green Room is a perfect example of this. I love this movie, maybe even more than Blue Ruin. I can’t wait to see what Jeremy Saulnier has up his sleeve next. He’s quickly becoming one of my favorite filmmakers. I don’t want to say any more so you too can have the great moviegoing experience that I did. Go find Green Room wherever it is playing. It’s a phenomenal exploitation movie and my current favorite film of 2016.
Posted by Patrick Bromley at 5:00 AM