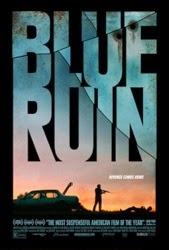 What a year for genre films 2014 is shaping up to be. Sure, there's been the usual shit like I, Frankenstein and the murdered Knights of Badassdom, but we've also had Almost Human and Cheap Thrills and Stage Fright and The Raid 2 and Under the Skin (which I still haven't seen but am taking Adam Riske's word for it) and it's not even summer yet. That's a terrific group of movies.

Now there's Blue Ruin, written, directed and shot by Jeremy Saulnier, his second film after 2007's Murder Party, still unseen by me. Blue Ruin is a violent revenge film of a different sort -- part bloody, part funny, part sad -- and it meets all the requirements of the genre while making us reconsider almost every other movie under that umbrella, save perhaps the work of Park Chan-wook. 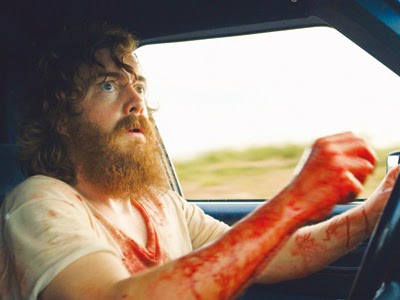 Macon Blair stars as Dwight, a homeless vagrant living on the street and stealing the occasional bath when he's picked up by a cop and told that Wade Cleland, the man responsible for killing his parents, is being released from prison. With nothing to lose, Dwight takes it upon himself to kill Cleland. Unfortunately, he doesn't know the first thing about killing and very few of his efforts go according to plan. Before long, Dwight is concerned that Cleland's family will come after has sister and her kids and has to step up and protect them.

It's easy to imagine a lot of the reviews for Blue Ruin (which, aside from the avalanche of "It's really good!" tweets, I have managed to avoid) invoking the names of Joel and Ethan Coen in describing the film. That's because the Coens specialize in movies about people who commit crimes but have no knack for it -- the difference being that the Coens typically have their characters acting out of greed, not vengeance (True Grit aside). Their characters are in over their heads because they are stupid. Dwight isn't stupid; he's in over his head because he is not a killer and because killing turns out to be much harder than he anticipated.

Like so many super low-budget genre films, Blue Ruin is destined to be under appreciated. It seems too simplistic on the surface. A guy runs around trying to kill someone while avoiding being killed himself. He looks for weapons. He gets hurt. He recovers. He visits a friend (Devin Ratray, aka Buzz from Home Alone, who crushes it here) and asks for help. The beauty of the Saulnier's script and Blair's performance, though, is the way that they layer in so much subtext inside that simple premise. Blue Ruin is a lot of things at once. It is not a movie of tonal shifts, first violent and then funny and then suspenseful and ultimately sad. It is all of those things simultaneously. It is a black comedy. It is a suspenseful thriller. It is a heartbreaking character piece. That might be confusing for some audiences, who won't know how they should be feeling at any given time without the movie telling them. 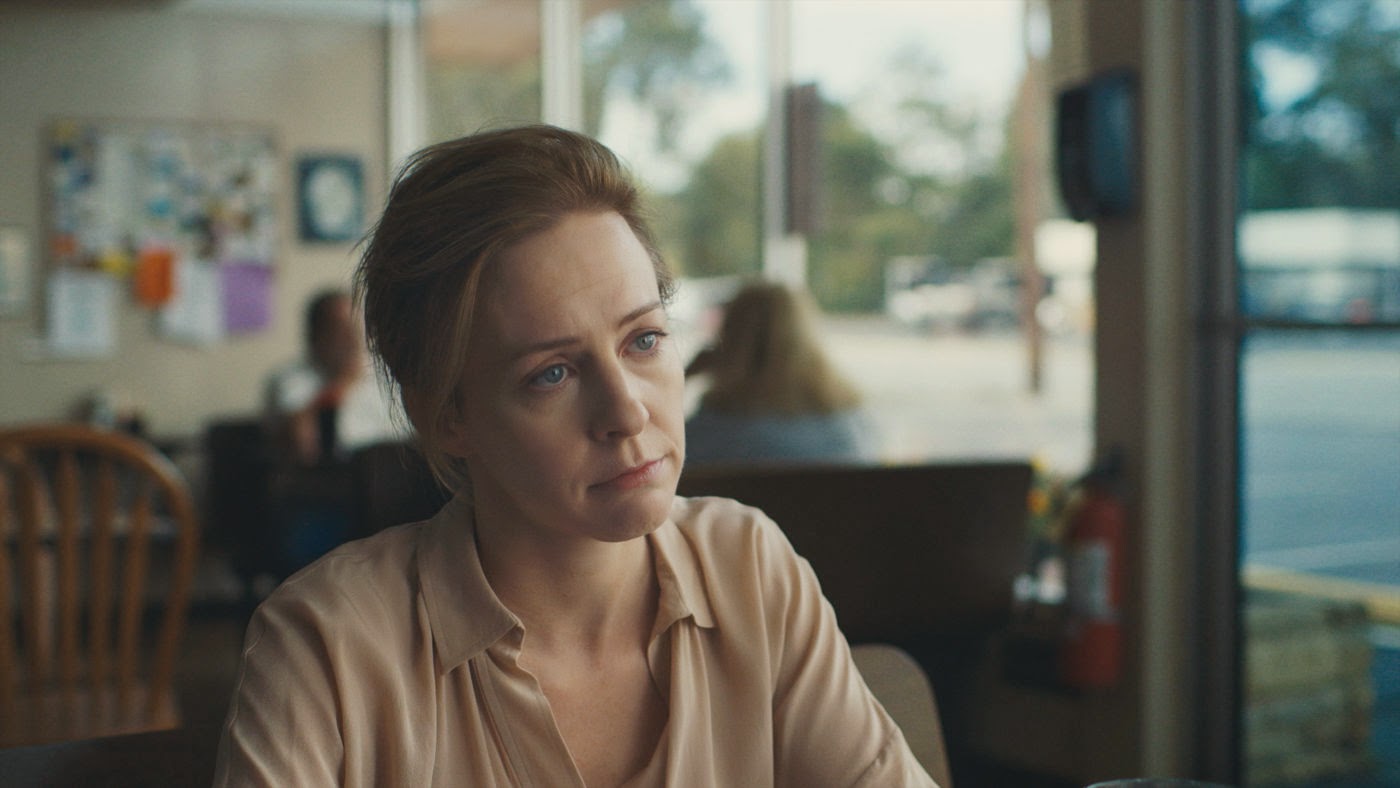 Consider a scene in which Dwight and his sister meet in a fast food restaurant and discuss murder: it's funny in its mundane absurdity, but there is such a shattered sadness to both characters that we can't only laugh. Blair's wide-eyed panic is funny, too (his cleaned-up, button-shirted look makes him look like a cross between Kevin Van Hentenryck and a murderous Joe Lo Truglio), except that we know it conceals true anger and pain. Thinking back on where we first find Dwight after learning what we learn in the course of the movie, it becomes clear that his life ended the day his parents were killed (the reasons for which are eventually revealed, and they are appropriately pointless and stupid but ruin multiple lives regardless). It turns the entirety of Blue Ruin into a tragedy -- a story of people left to play out a destiny decided for them by their parents. And yet it's not a "sins of the father" retread. That would rob Dwight of his agency, and the choices he makes are crucial to story Saulnier is telling.

Like this year's Big Bad Wolves, Blue Ruin combines harsh violence (death is always ugly), genuine pain and uneasy humor in a story of grief and revenge. Unlike Big Bad Wolves, Blue Ruin isn't just inserting "jokes" on top of its story either to create said uneasiness ("Can you believe we're making jokes at a time like this?" - The Filmmakers) or to break the tension. The humor here is situational. It's relatable. It's in watching someone try to become a killer who doesn't realize how how difficult it is or that he's no good at it. Dwight is who all of us would be under the same circumstances. That Saulnier has managed to make a movie that's much more than just "what would happen if a guy inept at killing went on a revenge spree?" makes the film all the more impressive. Yes, we want Dwight to succeed; as fans of the revenge genre (in which, like the buddy cop genre, I will watch any entry that doesn't also include the word "rape"), there is a kind of thrill out of seeing the protagonist exact bloody satisfaction. At the same time, we want him to turn back because we know he hasn't yet lost his soul.

This is the kind of film that has stuck with me. As I watched it, I was impressed with its technique -- the way it generates suspense and laughs -- and the power of Macon Blair's performance. In the days since, though, I have been moved by its sadness. Not many genre movies are able to do that. 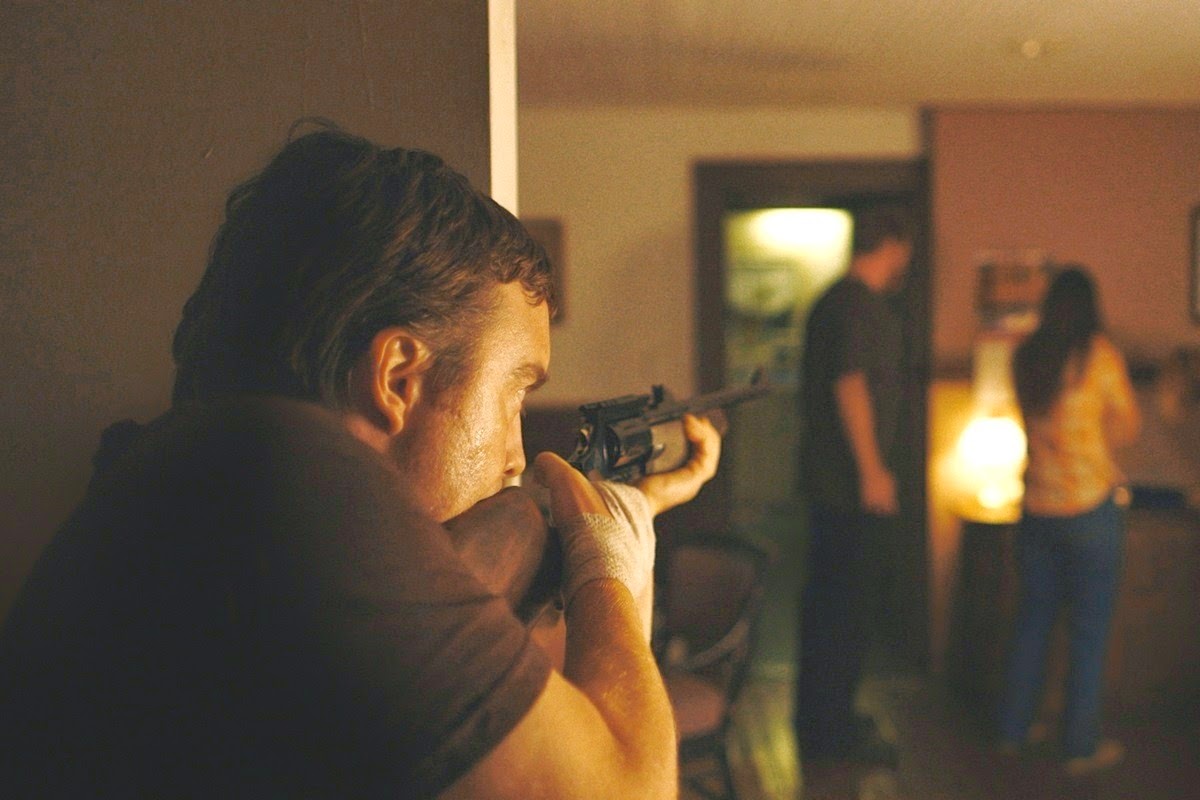 Two more facts about Blue Ruin: 1) it was funded in part by a successful Kickstarter campaign, which raised $37,000. This gives me hope that Kickstarter can truly be a force for good in the independent film world. 2) Eve Plumb is in it. Firing a gun.

Blue Ruin is currently available in limited theatrical release, on VOD and iTunes.
Posted by Patrick Bromley at 11:48 AM