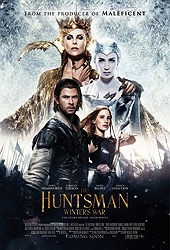 The Huntsman: Winter's War is a movie that no one was asking for. I'm one of the only people who really likes its 2012 predecessor, Snow White and the Huntsman, and even I was not asking for a sequel. This is a movie the seems willed into being by a studio insistent on creating a franchise where perhaps one does not exist. The original film grossed $400 million worldwide despite the fact that hardly anyone has anything positive to say about it. Perhaps it's time to acknowledge that much of that box office was driven by the participation of Kristen Stewart as Snow White, still hot off the Twilight series and starring in another romantic fantasy. That her casting and/or performance was the most widely criticized aspect of Snow White and the Huntsman doesn't appear to have affected its success. The fans were already in their seats.

It's perfectly fitting, then, that in making the sequel no one was asking for, Winter's War also brings back everyone but Stewart (though she is referenced several times and is represented in one shot by a stand-in). It's all part of this movie's bizarre development process; after it was discovered that Stewart and Snow White director Rupert Sanders were having an affair, the talk began that the obligatory sequel would spin off to focus on Chris Hemsworth's Huntsman character and that neither Stewart nor Sanders would be involved. For a long time, the sequel was to be written and directed by Frank Darabont -- would that we had gotten that version -- but he dropped out and duties fell to first-time feature director Cedric Nicolas-Troyan, the visual effects supervisor on the first movie. So here we are, four years later with a sequel no one is asking for to a movie no one remembers, much less remembers fondly. 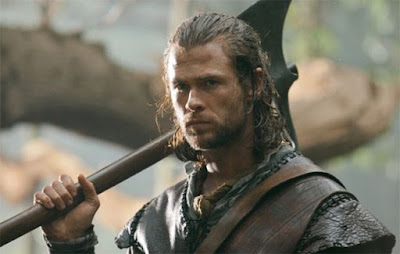 Perhaps the most inexplicable element of Winter's War -- which I promise I'll be getting to discussing shortly -- is the insanely overqualified cast. In addition to the returning Hemsworth and Charlize Theron (reprising her role as evil queen Ravenna), the sequel adds both Emily Blunt and Jessica Chastain in major roles. How three of the most talented and successful actresses in Hollywood were talked into appearing in The Huntsman: Winter's War I may never understand. Maybe Blunt and Chastain signed on when this was still going to be a Frank Darabont movie.

Describing the plot of the movie is more difficult than it ought to be. Part prequel, part sequel, Winter's War begins many years before the events of Snow White and the Huntsman to show Ravenna and her sister Freya in their younger years. Freya has a child with a man engaged to another woman and that child is murdered, unleashing her powers of creating ice and cold because Frozen came out between Snow White and the Huntsman and this movie and proved to be very popular so why not borrow a little something something from that? Freya begins kidnapping children and raising them as her own personal army that she calls Huntsman because the title needs to be explained somehow. Two of those children grow up to be Eric (Hemsworth) and Sara (Chastain), who eventually fall in love despite the fact that love is forbidden in Freya's kingdom. Freya discovers their betrayal, killing Sara and banishing Eric for dead. 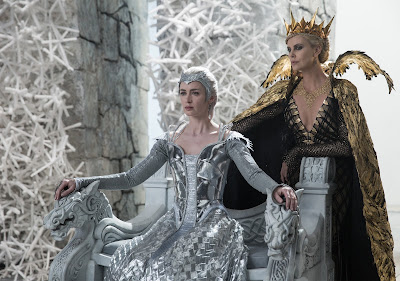 We then jump ahead seven years -- conveniently past the events of Snow White and the Huntsman -- with Eric still serving as a soldier in Queen Snow White's kingdom. He is tasked by the king William (Sam Claflin, returning in a cameo) to locate the magic mirror of Ravenna, which has gone missing and is driving Snow White mad. Eric is joined by two dwarves (a returning Nick Frost and "franchise" newcomer Rob Brydon) and eventually Sara, who is revealed to still be alive and is angry at Eric for what she believes is abandoning her. They go looking for the mirror. More stuff happens. There are goblins and magic ice owls and double crosses and forest sex and surprise reveals and ice walls and...well, you get the picture.

Nearly everything about The Huntsman: Winter's War betrays its origins as a sequel pushed into development by a studio and going through multiple drafts and iterations before being released as a kind of Frankenstein's monster of ideas and pre-vis set pieces, never a coherent story so much as a bunch of stuff appearing on screen. This is not to say that it's a bad or unentertaining movie. It isn't. There is just enough visual invention on display, enough star power in the cast and enough energy and fun to the proceedings to keep my attention as it unfolded, but there's no getting around the fact that it's ultimately kind of generic -- the last word I'd ever want to use to describe a movie with giant snow wolves and Jessica Chastain firing arrows as a super hot warrior woman. 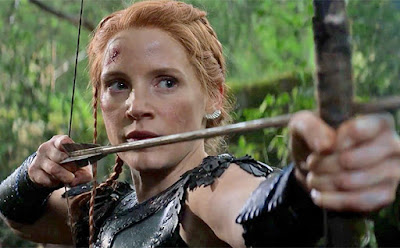 The middle section of the movie is the strongest, when it turns into a standard quest story and loosens up with a sense of humor. While there's a lot I like about Snow White and the Huntsman, it's a humorless affair; it's wise for the sequel to inject some fun into its fantasy world. Hemsworth gets to be more roguish than brooding, transforming from a tortured widower to a hopelessly romantic optimist. The beats he and Chastain go through are often unmotivated and, like a lot of the movie, only make sense on a scene-by-scene basis, but at least Hemsworth appears to be enjoying himself. Emily Blunt mostly gets to mope, but at least her performance carries with it a little bit of Snow White's thematic ambition in exploring a kind of pain that's totally specific to women. And then there's Charlize Theron, whose role basically bookends the movie and who pitches her performance like the headliner at a drag show. She goes big in only the way a star who already has an Oscar and gives no fucks can.

Hard as it may be to believe, there are aspects of the original Snow White and the Huntsman that make it stand out: the lovely score by James Newton Howard, the gorgeous photography and the impressive eye of director Rupert Sanders, the smart and subversive feminist thematics. Almost all of that is missing in Winter's War, even though James Newton Howard has once again contributed a score and the screenplay tries to say some things about women in the world. The sequel fails to commit to the nerdy fantasy elements the way the first movie did, too, despite taking place in ice castles and enchanted forests. There is no moment as gorgeous or sincere as the one in which Kristen Stewart encountered the unicorn in Snow White. It's just a lot of generic CG -- The Hobbit  to the original's Lord of the Rings. They even try to repeat the cool Florence & the Machine song that played over the excellent credit sequence of the original, but Halsey's "Castle" is no substitute. 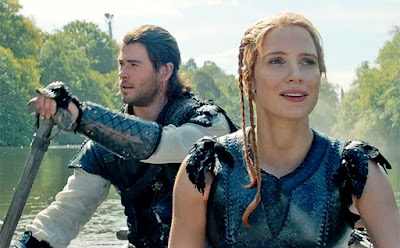 As a fan of dorky movies like this, I still had an ok time with The Huntsman: Winter's War. There's a Sam Raimi-inspired fight scene inside a tavern that stands out. Chris Hemsworth is his charming self, better when he's more in Thor mode (as he is here) and less in Blackhat mode. Any movie that has Jessica Chastain beating people up is going to be at least sort of enjoyable. But too often it tries to copy what came before it without understanding what made Snow White and the Huntsman work. That's a movie that's sneakily special despite no one caring about it. The Huntsman: Winter's War forgets the first part and is just a movie no one cares about.
Posted by Patrick Bromley at 1:00 PM