To Heist or Not to Heist 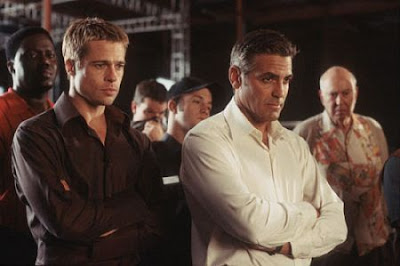 This whole "needing money to win at life" thing is a bitch. Money for food and the four "H"'s: Housing. Heat. Hydration. Hygiene. Just the basics required to survive another day.

Lately I have seriously considered ditching the lot and digging a hole in a hill to begin a minimalistic life of living off the land... but knowing that my entertainment will entirely be left to Daryl re-enacting films for me through mime, I have started to question this rationality and have instead been researching some of my favourite films for an easy fix. Since winning the lottery is down to chance, so let's make our own luck shall we?

My research of choice: All the heist films I can cram in my face.

Speaking of faces, there seems to quite a number of cover your face with this: nun, clown, or president mask. 'Cause that's never a dead giveaway when walking into a bank, right? 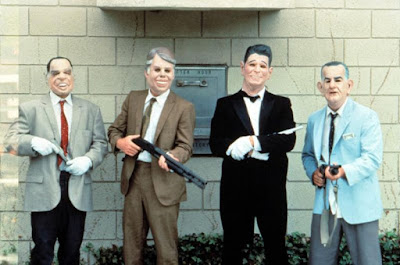 Surprise! Here we are! The Dead Presidents and we would like all your money please. Enter the unwitting accomplice I-know-kung-fu-Keanu and the inevitable escape on a plane and parachute to safety so we can live to surf another day. What doesn't work for me? All that physical shit. I can barely run without tripping over my feet, so I shall bench this option for now.

What about a good ole clown? That's never creepy right? Unless you're Heath Ledger and have clown face under your clown mask. 'Cause that's dedication to being straight up awesome. Not to mention being the last clown standing in an intricate bank heist and calmly escaping on a school bus. Me? I would have to coordinate my plans with the city transit system. Simply put, this chick don't drive. The added clown element would be a lovely addition to all the colourful characters on the bus as well! 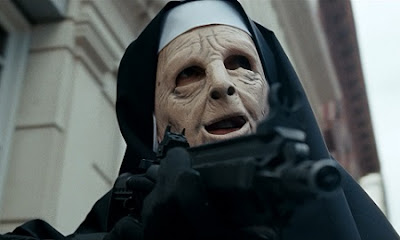 Now, the last disguise for me would be a nun. 'Cause nuns and machine guns always seem to end with high speed chases and death to many. In addition to all the speedy chasing (on foot for me), I'm willing to bet my getaway would include a hell-of-a-lot of tripping over my nun robes. (Robes?) Short legs have always been my downfall.

Butch Cassidy and the Sundance Kid (1969)

Short legs don't matter if you're on a horse, though! But then there's the whole being on the run and having to escape to South America thing. Not to mention being unsure of where and how I would eventually be killed. Terrible coordination (riding a horse was a dumb idea), short legs, no getaway vehicle and not wanting to potentially die in places unknown... Not to mention the only weapon I have access to is a bad-tempered cat when she's woken up. Perhaps I should switch gears and get to working on being the brains behind the operation.

First, let's start with a team of professionals. Off the top of my head, my brother Tim would be the fast talker leading the group of yahoos to victory. I would leave the gymnast moves to my mime-husband and my brother Cam can bring the speakers. Uhhh what? Perhaps scheming an elaborate underground safe heist in a casino should be left to Clooney's professionals, as I have found yet another thing that I am useless at while seemingly planning another party. With speakers. Brain plans are clearly not my forté. 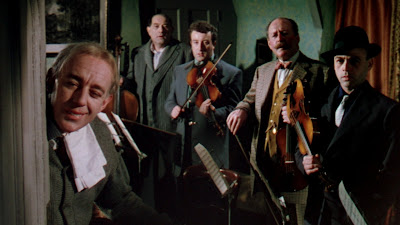 As my research progresses, it is becoming more and more obvious that I am clearly not cut out for the heisting role in the actual heist... But if a group of oddball criminals under the guise of classical musicians has taught me anything, it's that the insurance companies do not want the money returned... And that it's never safe to hide out in a little old lady's house, as certain doom awaits all those who intend to harm her. Little old ladies kick ass.

Now these guys had it right. Clearly a kid is all that was missing from everyone else’s plan. Always bring your child to a jewelry heist, ensuring they do not have their homework with them. Sidenote: the little roadside diner en-route to the safety of the French border with the hole in the floor in which you pee -- yeah, that’s the one -- it’s run by witches. And they’ll murder your ass in all sorts of awesome ways.

If I had Tarantino in charge of planning my jewelry heist, I'm fairly certain it would end in a fantastic shootout where someone would probably “get shot” prematurely and mass confusion over who shot who first would be the focal point and not the perfection of the actual art. Too confusing for me. Not to mention all the words I would have to learn. 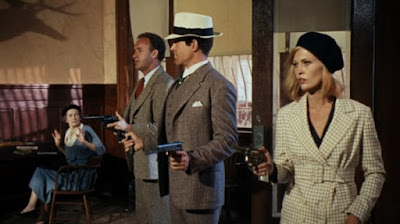 And since we are talking about bloody finales, this of course deserves its place at the end. If this film taught me anything, it’s that no matter how lucky you feel and no matter how right it seems to be robbing all the banks, it will inevitably end in 1000 bullets and bloody, bloody death.

Now now, don't any of you go getting some weird idea about some crazy chick in Canada going to rob a bank, casino or a rich guy with all the jewels. Just relax. I am loud, uncoordinated, non-violent, non-driving wuss that doesn't even own a clown mask. And I don’t want my story to end riddled with bullets. On a horse. (But I do know ALL the tell-tale signs of being in the presence of a witch!)

Also, I know where money comes from.

Mmmmm.
Posted by Patrick Bromley at 11:00 AM