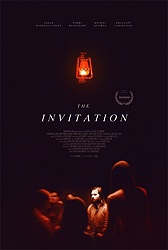 Dinner parties are the worst.

This is not because The Invitation is a movie of twists, necessarily. The things that are revealed are not surprises. Instead, it is a movie of dread and tension, more effective if you genuinely don't know where it's going. Because that's becoming more and more difficult to do in the days of multiple trailer premieres and social media conversation, it seems right to offer a heads up. 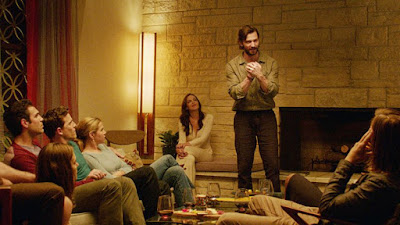 Prometheus' whiniest scientist Logan Marshall Green plays Will, who, as the film opens, is headed with his new girlfriend Kira (Emaytazy Corinealdi) to a dinner party at the home of his ex-wife Eden (Tammy Blanchard) and her new husband David (Michiel Huisman). Surrounded by a group of their friends and a couple of unfamiliar faces, Will has to face tragedy in his past and the uncertainty of what the night has in store for everyone.

I don't want to say more about the plot of the film for those of you who continued reading despite my protestations. Like a lot of horror movies set during dinner parties, not everyone's motivations for being there are entirely altruistic -- or are they? One of the really nice touches of the film is just how long it's willing to keep the audience guessing as to what's actually happening, even question the reliability of Will's perspective as the default protagonist. Director Karyn Kusama guides every scene into an uncomfortable place, framing shots in such a way so as to be either innocent or ominous, layering in sound and music that is sometimes incongruous to what's happening on screen to constantly keep the viewer off balance. We're never sure if we can believe our eyes and our ears in The Invitation, or even if we ought to. Like 10 Cloverfield Lane from several weeks back, this is one of best-directed thrillers of the year. The pacing is much different -- it's engineered not to keep us on the edge of our seats but to create a pit in our stomachs -- but the construction is masterful, the photography gorgeous, the writing literate and intelligent. 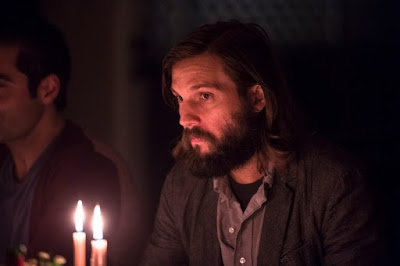 As well as it works as a thriller, though, it's the undercurrent of sadness that really makes The Invitation such a powerful film. At its heart, it is a movie about grief and the lengths to which so many of us will go to not feel that grief. Death -- particularly accidental death -- hangs over the proceedings from the very opening frames when Will and Kira hit a coyote on the road, and the way that Will chooses to face that situation separates him from the others at the party, several of whom share stories of tragedy or pain in their pasts. The final moments of The Invitation are a total gut punch almost having nothing to do with the ways that it finally embraces being a horror film, but rather for the emotions that come out into the open at last. There are lines of dialogue shared between two characters that are almost unbearably sad, and suddenly the rest of the movie is thrown into relief. Kusama has been guiding the film not towards the release of tension but towards this emotional catharsis.

If I don't quite connect to The Invitation as much as some other recent indie horror films it's only because it feels slightly less personal than the movies with which I've fallen totally in love. It's a movie that almost demands that we remain outside of it somewhat, observing it objectively because we're unsure which subjectivity we can trust -- we're not even sure if "hero" Will can be trusted. Again, this is a testament to the movie's construction, successfully achieving that which it sets out to do. Kusama is a gifted, idiosyncratic filmmaker whose work has been consistently interesting even when it's mismanaged by the Hollywood system. Seeing her finally get to make such an assured and emotionally rich film -- one that's her movie, free of baggage and interference -- is truly rewarding. 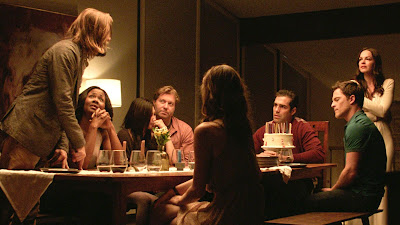 There's something refreshing about the sophistication and maturity of The Invitation, a movie that rewards not only patience but also life experience. So many horror films depend on empty shocks or executing a (usually) thin premise that to see one built out of character relationships and their choices is good for the state of the genre. It's an incredibly unnerving, technically well made film, and while it may go to exactly the places we think it's going to go, the surprise is still in how affected we are once it gets there.

The Invitation is currently playing in limited release and on VOD and iTunes from Drafthouse Films.