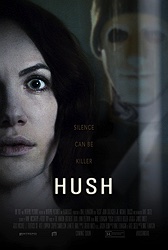 There might be something to this Mike Flanagan guy…

As a big admirer of 2013’s Oculus, I’ve been eagerly awaiting a follow-up from writer-director Mike Flanagan. To my good fortune, he’s due to release three features in 2016: Before I Wake, Ouija 2 (ugh!) and Hush. As evidenced by Hush, Flanagan seems to have the goods -- especially when it comes to developing suspense and atmosphere. Even better fortune, you can watch Hush right now on Netflix (where it premiered this week). So simply put -- no excuses. Go stream this indie horror flick. It’s a bummer it won’t play in theaters (same with Adam Wingard’s upcoming Death Note) but these days I’m all about convenience so I guess its ok. It’s just the way the wheel is turning in film distribution. The consolation is that Netflix will give the film a wide audience right from the outset. 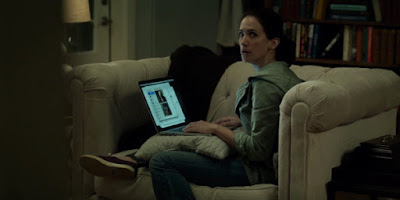 The main reason to see Hush is the stellar lead performance from star, co-writer and Flanagan’s real-life wife Kate Siegel. Resembling Angelina Jolie (at least I think so), Siegel brings a similar gravitas and toughness to her performance as Maddie, a deaf-mute novelist being terrorized in her secluded home by a mysterious stranger. Buoyed a bit by the rest of the small cast, Siegel is what kept me interested throughout. This movie would not work nearly as well without her. The plot is reminiscent (possibly even derivative) of other films such as Wait Until Dark, The Strangers and You’re Next, but Flanagan seems to know that so he brings neat little twists to the film and is helped by having a brief 87 minute runtime. It’s a lean machine, with no B-plots, and though it’s slight it is also never less than diverting.

I do have some gripes about Hush. I wasn’t a big fan of the attacker in the film. The actor portraying him (who I’ve seen in other movies and liked) simply does not have the physical presence or intimidation factor the role requires. I guess it helps in making the hero-villain showdown seem more evenly matched, but I do wish he was more imposing. He also seems to be very aware he is evil so he does a lot of indication acting like scowling and such. It feels more like a high-schooler’s approximation of playing this role than a professional actor. Also, I might have missed it but I couldn’t figure out if the bad guy had a motive. It bugged me during my viewing of Hush. I also think the movie trades off between being inventive with the setting and also running out of ideas with it so certain sequences work while others feel tired. Lastly, I didn’t like a sequence about 2/3 of the way into the movie which felt like a cheat (you’ll know the one I’m talking about when you see the movie).

This review will be a little shorter for me than most because I don’t have much else to say about Hush other than its pretty good and worth a viewing on Netflix. It’s a total style exercise, a calling card for its performers and director. It’s also a triumph of technique (the sound design is great so much so that the title card reveal made me jump) and features a great score by The Newton Brothers (this one reminded me at times of the one from Heat [by Elliot Goldenthal] actually, particularly the end credits music). The movie isn’t about much so digging into its themes is proving challenging but not all movies are meant to do more than entertain, so with that in mind, I think Hush succeeds on its intentions. Still, I can’t wait for Before I Wake. Keep up the good work Flanagans!