Yo Bromley! Spin that shit. I’m cleanin’ out my claw-zit.

The Entrance:
Welcome back! What is a mall movie you ask? Here’s the definition from Riske’s dictionary:

Mall Movie (mawl moovee) (noun): A movie released in the year 2000 or later that would have played at a shopping mall cinema if it were released in the 1980s or 1990s. Kitschy, genre-defined, eclectic, exploitative, incongruous, idiosyncratic, sleepover appropriate. 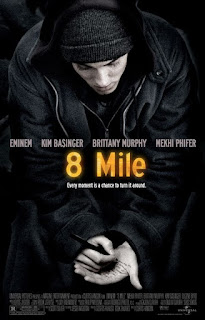 Underneath It Mall
I remember seeing the trailer for 8 Mile for the first time before I saw Blue Crush with a group of friends. Seventy-five percent of them said “that looks dumb” after the trailer ended but I turned to my friend Chris and we just looked at each other like “OMG! I have to see this movie, like yesterday.” Then came November 8th, 2002, and I went to see 8 Mile opening night with friends at college. Our campus theater was sold out of the movie -- for three days! The box office girl basically laughed at me like I was asking for a Turbo Man doll on Christmas Eve. Cut to the following Monday, I saw 8 Mile and I loved it despite not being the biggest Eminem fan. Some of the songs are good but most just don’t do anything for me; his best work, in my humble opinion, are the songs he has on this film’s soundtrack. What I really loved about 8 Mile is that it’s basically a rap Purple Rain. Considering I saw 8 Mile before Purple Rain made it seem even more impressive to 2002 Adam Riske.

It clicked for me pretty early on in this most recent viewing that I still love this movie. This is one of my favorite movies centered on music. I mean, there’s Cheddar Bob (one of the great annoying characters of all-time), Michael Shannon, Anthony Mackie, Eminem’s funny “sensitive” acting when he has scenes with his on-screen daughter etc. Not to mention “Lose Yourself” is one of the greatest songs every put into a movie. #MomsSpaghetti 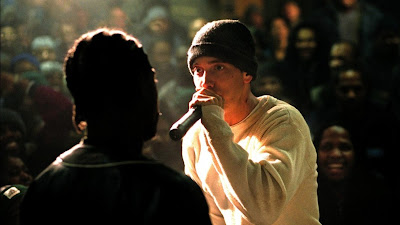 Mall Run
8 Mile was a bona fide mallbuster. It opened at #1 in its opening weekend, making over $51M, finishing with $116M at the end of its run. Long story short, Leaders in the Free World were in the motherfucking house.

How was the trip? (Ratings go from 1-4)
Tell your mom to pick us up in 3.5 hours! I want to practice my rap battling in the parking lot after the movie ends. Oh, and tell your mom I’ll get the seven digits from her for a dollar tomorrow. OH!!!!!

What’s Next at the Mall?
A double feature! Road Trip and EuroTrip, followed by a slice at Garibaldi’s and a $50 shopping spree at Service Merchandise!