Synecdoche, New York: All Life is a Stage 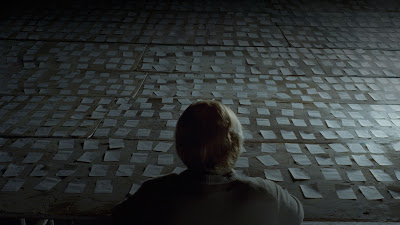 If an author creates a world and leaves it open, that world has permission to write and rewrite itself.

Imagine Synecdoche, New York  is a massive Construction of Woody Allen, Franz Kafka, David Lynch, every doubt you’ve ever had, and everything you forgot from your Intro to Philosophy class. AKA a robot you’d definitely want to bring to a party. It’s important to mention I was really tempted to write this review in third person as a reviewer reviewing someone else writing a review...It got too complicated, so here goes: 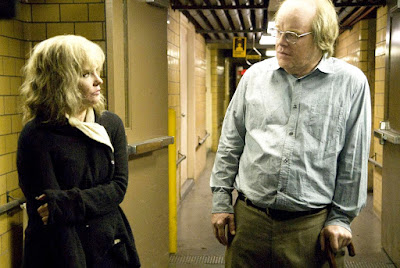 I can only imagine the maps Charlie Kaufman drew to wrap his own mind around the impossibly knotted story that is Synecdoche, New York. And I’d posit that if you unwrapped that knot, the plot line would stretch to the moon and back. Easily. Being brief about Kaufman’s directorial debut is difficult, but suffice it to say it’s a wonderful journey of self-reference, decadence, and authorship that goes so deep into the absurd you’ll probably need an antacid after watching it.

Caden Cotard (played by the late, great Philip Seymour Hoffman) is a struggling director living in a world that is seemingly against him. A failing marriage, unfulfilling job, and a series of are-they-real-or-aren’t-they illnesses leave him a neurotic mess of a man akin to a Woody Allen self-portrait on suicide watch. Suddenly, he is awarded a MacArthur grant and chooses to use the funding to pursue a theater project that will convey nothing but the brutal truth of life and death. Cotard (look up Cotard Syndrome if you’re feeling studious) does this by casting actors to play those around him and reinventing and replaying their lives in a never-ending 24/7 rehearsal, for which there is no audience beyond the actors themselves. In his pursuit of realism and brutal honesty, we are faced with a series of facades through which to understand and enjoy (maybe) the movie. 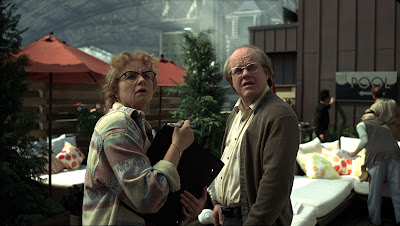 The internet says the movie is about the meaningless of life and inevitability of death. I don’t really agree. It’s certainly a theme but I think, if anything, Kaufman uses that fear we all have to talk about perception (and construction of perception) as a whole. Throughout the film, Kaufman plays with everything from linguistics to time to memory. My favorite part, which functions as a synecdoche for the entire film, is when Caden is talking to the man he cast as himself—and former stalker—Sami Barnathan (Tom Noonan), about Caden’s lover, Hazel (Samantha Morton). Sami, speaking as copy-Caden, mentions Hazel is fantastic in bed. Real Caden is taken aback, asking how could he possibly know that, to which Sami replies, “I read it.” Kaufman blurs the lines between truths and “untruths.” He even goes so far as to let his characters rewrite their past and rewrite their futures. Like no matter how absurd the movie gets, I have no issue believing this world could somehow exist somewhere.

Salvador Dali said in his autobiography that the things we imagine to have happened are just as valid as the things that have happened, making them simultaneously true and untrue. And that’s what this movie brings to life. Everything we do, share, and recall in passing is nothing but a construction of true past, arguably making everything a lie...woah...anyway. In a series of screens, books, and secret messages Kaufman discreetly sends the audience, we get to experience Caden, the rest of the characters, and ultimately Kaufman in full. I’m impressed by this film, and eager to say it makes my top 5 of all time, because it IS such an honest portrayal of the human experience done through surrealism and absurdity. Scenes that we understand to last for hours last months, or years. Time moves irrationally, as though we were watching a dream. I think it does so well what so many films have failed to do: let us as an audience close the circuit of Kaufman’s story. We are reflected in him, relate to him, and are him, really. 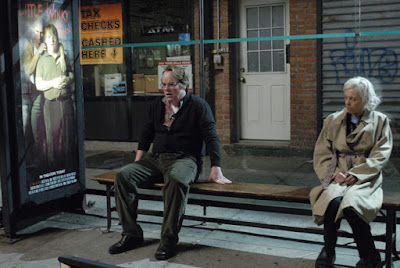 And now a bit of a personal anecdote that I think adds yet another goofy layer to the story of this film. I very briefly dated an actor that tried to sell a monologue from this movie as an original thought of his own. I love that of all movies to quote and of all situations to use plagiarism to your advantage, I got to witness an actor quoting a movie about how we’re all actors acting various roles that combine to form our (potentially fabricated) personalities. I love this movie for the reason it’s most often criticized: it goes way too far. It is self involved and if it were a person, we could all agree that that person would majorly suck. I barely even scratched the surface of the 17,000 ways this movie could be interpreted and I’ll probably change my mind with a few more viewings, but for now my main take-away is, “wow.”