Sex, blood, and vague references to classical music that evoke All the Feels.

There’s nothing that gets me ready for a good self-indulgent sadfest quite like the movies of Lars Von Trier. And, as it's basically never ending winter over here on the east coast, I'm giving myself full license for a mopey movie week. So get yourself into some well-worn pajamas, grab some tissues, and let’s talk the Depression Trilogy.

These movies have received a LOT of flack. And while they are definitely not without problems, the loudest criticism is the same stuff you always hear when sex and violence in movies come up: it’s misogynistic, crude, and pornographic. Now, trilogy is NOT for the faint of heart, like…at all. But I think boiling the movies down to an artful way to get off and hate on women is, frankly, lazy.

Antichrist (2009), Melancholia (2011), and Nymphomaniac (2013) explore three faces of depression through bizarre versions of movie genres we all know and love: a horror film, a disaster movie, and a coming of age story. They also work like a piece of music in three movements and even reflect concerto structure: opposition, cooperation, and independence. Or fast, slow, fast. He’s using bases we already understand to evoke emotions and contorts them, making for three sections of one story that play out between the real and the surreal. All in all, you’re in for a super confusing ride. But rest assured, the films are so perfectly plotted, it’s really an experience to see how they all fit together.

I often refer to Antichrist as the most beautiful movie I wouldn’t recommend to anyone ever. And, admittedly, I had a hard time rewatching it for this review. The story focuses on a couple (referred to as She, played by Charlotte Gainsbourg, and He, Willem Dafoe) as they pick up the pieces after their young son’s death. She has lost touch with reality and—shout out to the male saviors out there—He, a psychiatrist, decides to treat his own wife after their shared tragedy. He embodies rational level headedness throughout most of the movie while She becomes more rabid and consumed with her self-assigned guilt. So...following horror movie canon, the two of them take to a wood cabin for some good old fashion exposure therapy (what could go wrong?) and this is where, for lack of a better expression, Shit Gets Real. I don’t want to spoil anything (in case for some reason this review motivates the masochistic side of you and you go watch it) but the couple’s story spins out and they are essentially consumed by their perceived wrong-doings. Von Trier takes the reality of a couple’s tragedy and elevates it to a totally surreal, skin-crawling experience for the viewer. Basically get ready to cringe. A lot. 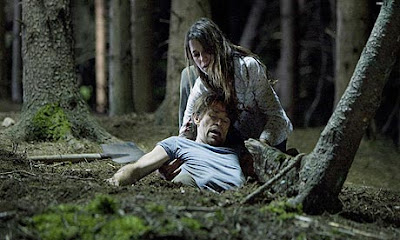 Melancholia, the second movement, is such a slow burn it's almost suffocating. We follow a disengaged Justine (Kirsten Dunst) on the night of her wedding. As the party guests try to keep things to some degree of normalcy (and not well, might I add), we watch Justine sway between saving face for her folks and falling totally out of touch. After an altercation with her sister, Claire (Charlotte Gainsbourg), Justine’s sludgy, antisocial behavior is replaced by a manic reorganization of some books in their library. She violently opens to various paintings and displays them on the shelves, setting the chairs in the room before them. In this "something's about to happen but the characters are unaware" moment that's typical to disaster movies, we get that something is being worked out but are also kept in the dark. Unless you know a LOT about paintings, then you may get something. 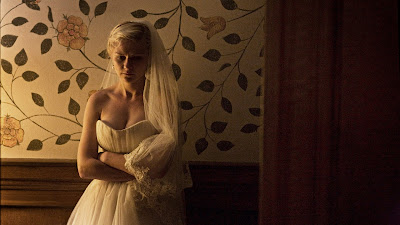 ...Basically the wedding is a huge bummer and we fast forward to just after the crumble of the couple’s marriage, the loss of Justine’s job and her ability to take care of herself. As though things couldn’t possibly get worse, the two sisters are faced with the possibility that a planet is slated to collide with the Earth. Justine, having already lost touch with her own humanity, seems to be almost welcoming to the possibility—suggesting maybe she was doomed even from the start. She seems to melt into the nature around her, and in their crisis, is sort of the only sane looking character by the end of the movie. 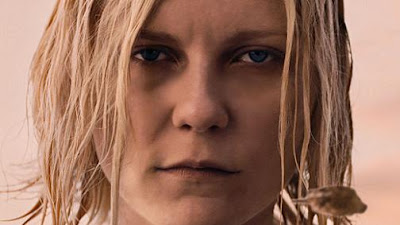 The final two movies, originally meant to be one 7,000 hour-long film, got the most buzz of the trilogy. If you Google the movie, most of the information you’ll find is dealing with the mechanics of the sex depicted. But I think that that misses the point. Yes, naked bodies. Yes, sex. And yes, lots of it. But in, like, the least sexy way possible. The two parts are structured as a retelling of Joe’s (Gainsbourg) life as she explains to a celibate monkish character named Seligman (Stellan Skarsgard). Her story is framed as a discover of her sexuality and quest for deeper/more powerful feeling (literally and figuratively, I guess) but I almost think these two movies deal more with her coming to terms with not being able to feel enough of anything. She’s numb. We watch her abandon various types of love: romantic, friendship, and familial, all in the search for feeling. Von Trier uses sexuality to talk about feeling in extreme. Joe seeks out extreme pain, pleasure, and power; and they all end up blurring together and kind of hitting the same note of discomfort in all of us. 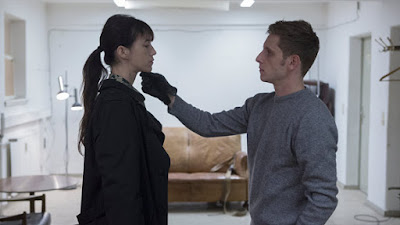 Von Trier writes female characters—and all his characters really—less as human beings but more like mythical creatures. It sounds sort of weird, but stay with me here. They don't really reflect real-life reactions, but more so work as these supernatural tools to perpetuate how emotions feel—not how they appear. Like music, or paintings, or poetry. All of the movies in the trilogy layer physical sensation (and lack thereof) with an intellectual interpretation of these sensations. We end up with this weird layer cake of religion, sadness, allegory, and sort of end up dissatisfied.

But like…in a good way?