The Pacing of Blue 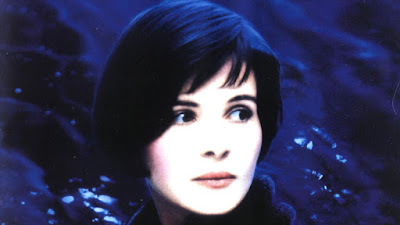 Lately I’ve been going through a phase of revisiting movies my mom made me watch way sooner than I should have. Not to give her the satisfaction of being able to say “I told you so,” but (I reluctantly admit) the woman has an amazing and unorthodox taste in movies. One of these films is Three Colors: Blue from Krzysztof Kieslowski (which took me entirely too long to type out). It’s the first movie since Victoria that made me stop looking at my phone, work email, or what-have-you (my cat) and be totally engaged in a movie.

This, in large part, is due to the film’s pacing; perpetuated in the small moments set up by Kieslowski that intentionally blur the line between Julie's (played by Juliette Binoche) experience of life and our own. It should come as no surprise that Binoche is simply a treasure, and her performance is breathtaking. But, I'm less here for celebrating one of my favorite actresses and more for really zooming in on how we relate to her and her character in the film. It's a movie that almost "thinks" with you in real time. By highlighting the minutiae of Julie's grief, Kieslowski puts me there with her. But not in, like, a loud-proud-look-at-all-the-shit-I've-suffered way, but in a way that pulls me in with this sensitivity that makes me believe her. Mourn and learn with her. Almost like we’re watching the same story from the same perspective play out. 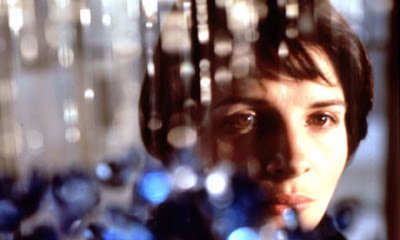 Women experiencing grief in film is far from a new concept. We’ve seen some instances entirely too real and mega uncomfortable to watch (looking at you, Blue Jasmine) and others nauseatingly corny and hardly relatable (wow, By the Sea... no words…) I feel that the flaw in many of these more contemporary films is that they rely entirely on telling us about someone’s grief and struggle and not letting us relate to it on our own terms. It's so important to remember that a movie doesn't just have to be this passive entertainment, but there are directors out there that trust us enough as an audience to come along for the ride.

My favorite scene in Blue is Julie’s dismissal of an ex-lover. As he talks to her, she’s distant—focusing instead on a street performer outside a café window. She’s taped off her world and instead chooses to focus on the little details that surround her. Almost as though her own narrative is a movie even she doesn’t want to be watching. The ex-lover leaves, and Julie is left staring at her coffee, followed by a 4 and a half second shot of her letting a sugar cube dissolve slowly between her fingers. This detailed shot doesn’t mean anything unless we share this space with her. When asked about Blue, Kieslowski talks about his consideration for an audience — He’s not making scenes for them, but instead keeping in mind what an audience will tolerate: a 5 second shot of a sugar cube? Sure. An eleven second shot? Probably not. 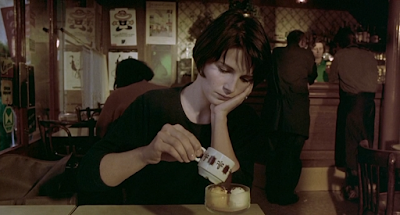 I recently saw Jeanne Dielman, 23 Commerce Quay, 1080 Brussels—and while I don't necessarily recommend that 3+ hour ordeal with maybe 15 minutes of dialogue in total—, Chantal Akerman wanted her audience to feel what her heroine did. Alone. Trapped. Anxious. And boy…was it effective. Now this isn’t some Portlandia-inspired glorification of '80s and '90s film (although I wouldn’t be above writing a book about that). And I’m not asking you to tolerate painfully slow movies or being bored. But in a week where all I’ve been asked my opinion on Batman v. Superman maybe 50 times, I crave more mainstream movies that have this pacing that now seems reserved for art house and indie films. I want the time in a film to develop along side a character and am nostalgic for the connection that happens with that time. So— go watch Blue! Rewatch Blue. Let directors play with your brain. It’s fun!