Confessions of a Former Autograph Collector

I think I was doing it wrong.

Autograph collecting is a funny thing. This sounds like the beginning of a comedy bit, but it’s true. You’re collecting a piece of paper or a picture or an object upon which someone has signed their name. Sometimes this is awesome, but I think I’ve learned that sometimes it’s not.

Back in my college days (we’re talking the late 1990s), I took a public speaking class where one of our assignments was to present a hobby that we enjoyed to the rest of the class. I don’t even remember what I chose to discuss (it was probably comic books), but one of the speeches that was given made quite an impression on me. This guy got up and told us all about how he had become an avid autograph collector and had amassed an impressive stack of celebrity John Hancocks. He passed around a binder filled with signed headshots of actors, which were really impressive to a young me. Even more impressive to me, though, was that he had done it all through the mail. This was what really got me excited, because as a kid growing up in the Deep South, the odds of running into somebody like Al Pacino were slim to none. Ironically, one of my friends actually did get to meet Al Pacino when Michael Mann’s 1999 film The Insider shot some scenes in our humble city, but I didn’t know that was a possibility at the time. I still hope to run into Brad Pitt at the grocery store, but it hasn’t happened yet. If I ever do, I’ll probably tell him I enjoyed The Mexican. 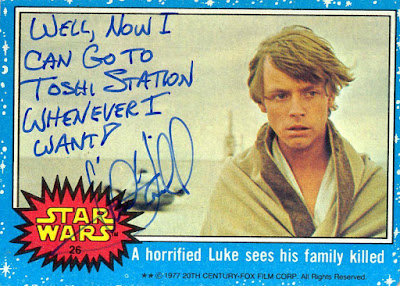 Back to the autographs. The way this kid had gone about obtaining all these signatures was by poring through autograph collecting magazines and visiting websites that would list an address, usually that of the actor’s agent or assistant, and the rate of success. These autographs were also judged as authentic or fake. Usually, the authentic ones were easily verifiable by comparing to other examples of a particular actor’s handwriting. Also, it’s pretty easy to spot an actual signature by looking at the pen strokes on the paper as opposed to fake autographs that come pre-printed on photographs. When someone got a fake autograph, they raised enough fuss about it that word got around in this collecting community not to send a request to that address or that celebrity. There was a small but dedicated group of folks who had devoted lots of time to getting autographs from their favorite celebrities and verifying them as authentic through research on what was then a very young world wide web.

I was hooked. I don’t remember how long it took me to get started, but it wasn’t long. Days, probably. I went out and bought several packs of those yellow manila envelopes and got busy getting the addresses of celebrities that had a high success rate. Here’s how I did it. I would write a single page letter on college rule paper. Not typed, because typed is impersonal and harder to connect with. I would spend a brief paragraph complimenting the actor on my favorite performances or films that they appeared in and wrap it up by asking if it was at all possible for me to get their autograph. I enclosed a self-addressed stamped envelope for their convenience. I’d take that self-addressed stamped manila envelope and fold it in half, putting that inside a bigger manila envelope, usually with a piece of cardboard inside to protect whatever came back. I’d then neatly fold my letter and insert that into the envelope, too. I kept a detailed log of which celebrities I had written, what date I had mailed the request, and what date I finally got a response. All it cost me was a few bucks for the stamps and the supplies. 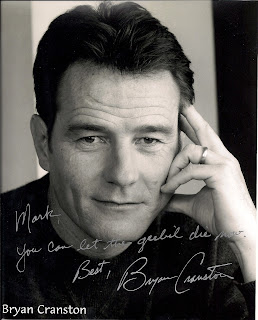 Many of these requests were never returned, but I actually had an astonishing success rate. I have seemingly-legitimate autographs from the likes of Robert De Niro, Michael Douglas, Nicolas Cage and John Cleese. My favorites are the ones that are personalized, though. For instance, I got that Al Pacino autograph I wanted, and it says “To Heath. BEST. Al Pacino.” I might as well have gotten an autograph from Zeus himself; it meant that much to me. John Travolta personalized his. So did Steve Buscemi. Jeff Goldblum and Harrison Ford were failures because they’re just printed on the photo. Samuel L. Jackson pressed down really hard when he signed his autograph and left serious indentions in the photo. The movie Highlander, Christopher Lambert, used a silver marker. The television Highlander, Adrian Paul, used a blue one.

Among the requests that were never returned were Quentin Tarantino, Tom Cruise (his was returned to sender), Arnold Schwarzenegger, Clancy Brown, Sean Connery, Bruce Willis, Keanu Reeves, and Sylvester Stallone. The request that took the shortest amount of time to come was Joe Pesci, which literally arrived a week to the day after I mailed the request. It features him at a mixing board smoking a cigar and says “God is Good.” The one that took the longest was Kevin Spacey, which was mailed on March 10, 1999 and arrived almost four years later on January 24, 2003. It simply says “Thank You. Kevin Spacey.” Of all of the ones I obtained through the mail, I think that’s the one that I might like the most because 1) I never thought I’d get it after so long, and 2) it’s classy and appreciative.

There’s a downside to all this, though. While I’ve got a sweet stack of celebrity autographs, I have no stories to connect with them other than what I’ve shared with you. I don’t even know if they’re legitimate because I didn’t see them sign it. I mean, I think they are because they seem to check out, but how can I be sure? They’re literally just bits of ink printed on dead trees because there is no memory or experience that I can connect them to. The autographs that I have that mean the most to me are the ones that I obtained through face-to-face encounters. Those signatures serve as a physical reminder of the experience of meeting someone that I admire and sharing a few moments with them. I have two autographs of Willow actor Warwick Davis. One was obtained through his agent via the postal service, and the other one was obtained face to face years later at a Star Wars event. Guess which one I’m more proud of? It’s not the one that came in the mail. It’s the one that I got when I spent a few minutes talking to him about some of his early UK TV work that most other Americans had never heard of. 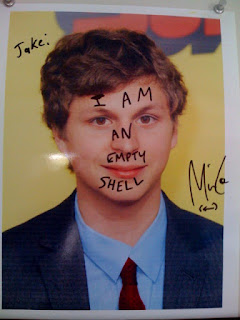 These days I’m not much for autographs, hence the title of this column. It’s not that I’m opposed to them; a few months ago I got to meet WWF legend Ted “The Million Dollar Man” Dibiase and I did ask for his signature and a picture. But what I’m going to remember about meeting him is the stories he told and how appreciative and down to earth he was. The autograph and photo I got with him is just a reminder of him telling me about the night he became a good guy and won the heavyweight championship off of Ric Flair back in 1985. He told me about how it felt to come into the ring being booed but to walk out and the end of the night being cheered. When I see his signature on that piece of paper now, that entire 5-10 minute conversation comes back. But an opportunity for one-on-one time with a celebrity is pretty hard to come by and my little handful of success stories is probably an exception. Then again, maybe that’s why those rare interactions mean so much to me and all those autographs that came in the mail feel a little hollow these days.

For the most part, I think my autograph days are behind me. I’m not judging, believe me. This is a guy who was so eager to interact with people he admired that he basically sent messages in a bottle to an address that might as well have been on the moon. But now there aren’t that many actors that I admire enough to ask for an autograph, and that makes me kind of sad. Maybe that’s part of getting older and realizing that most your heroes are an awful lot like you and don’t deserve to be put on a pedestal. I’ve been to conventions and events where actors that I though I wanted to meet were signing autographs. More often than not, these experiences ended up with me walking away feeling disillusioned. Sometimes the person I met was tired and grumpy after a long day of convention events, and sometimes they said and did things that actually made me think less of them and tainted how I watched their work afterward. There are actually some actors that I can’t watch on screen without there being a ton of baggage now. I wonder how many of the celebrities who I have autographs for would have let me down if it had been a face-to-face interaction? The phrase “never meet your heroes” definitely comes from a place of truth.

But you know what? I still have my binder full of autographs, and I probably will until the day I die. No Ebay for me, thank you. They represent a time when reaching out to my favorite actors meant a ton to me, and hearing back from them meant even more. I don’t know if it was really them responding, and there’s probably a good chance that it wasn’t. But it was a pretty great experience for a kid living thousands of miles from Hollywood who worshiped so many of the actors he saw on the silver screen. I don’t think I’d change a thing.
Posted by Patrick Bromley at 12:00 PM