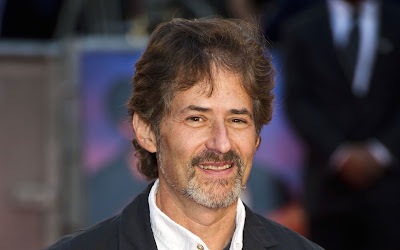 Patrick and I highlight some of our favorite pieces of music from the late, great composer.

Adam: My first pick is the End Credits song from the movie Glory. I didn't see Glory until probably the mid-'90s, so this song actually came up on my radar during the trailer for Backdraft. It was on the VHS of Kindergarten Cop and I would re-watch that trailer over and over because a) its great and b) it uses James Horner's tremendous end credits music from Glory. I love how it's heroic and sad simultaneously, full of heart and immediately moving. It makes me want to revisit the movie but it's also so seminal as a piece of music (for me) that I can recall it perfectly without even associating it with Glory. James Horner wrote many, many great pieces of music (which I'm excited to explore in this column), but this might be his most essential to me.

Patrick: Holy shit! SAMESIES. I was obsessed with that music from the Backdraft trailer, which I saw a LOT of times (the movie and the trailer, which I recorded off of TV so I could watch it again and again). I barely remember Glory, but Horner's score is burned into my brain forever. I might like that trailer more than I like the movie Backdraft (even though I like the movie Backdraft) and I think that music has everything to do with it.

Horner wrote a number of great '80s "hero" scores for the kind of sci-fi and fantasy films that I grew up loving, whether it was for Battle Beyond the Stars or Krull or another movie that I'm guessing is one of your picks coming up. These scores would give what were often lower-budget and/or "lesser" movies a sense of epic scale and class that they wouldn't have otherwise had. My favorite of these types of scores is Horner's composition for Star Trek II: The Wrath of Khan, the theme for which is maybe one of my favorite pieces of movie music ever. Now, this might be a real chicken/egg thing happening -- do I love the score to Khan because I love the movie, or is one of the reasons I love Khan because of the score? I can't even say. I know that every time I watch the movie and Horner's score starts up (brilliantly incorporating the original series theme before exploding into its own majestic thing) I want to start crying because I'm both so moved and so happy to be watching Wrath of Khan again. The music and the movie are that good.

Adam: Couldn't agree more on that Khan theme. I think the music enhances the movie for me personally. Do I like Wrath of Khan? Absolutely, but it's not a movie I love (the only Trek movie I love is the 2009 version). Nevertheless, that score selection is really, really great. It is probably the piece of music that best encapsulates the spirit of the franchise.

Staying on the hero score tip, my next choice is “To the Rescue” from The Rocketeer, one of his most underrated pieces of score - similar to the movie - which doesn't get its due often enough. It’s just a beautiful and uplifting piece of music that's worthy of even a Superman movie. Just picture this piece in a non-Snyder Superman movie and it totally fits. I like that the music conveys a sense of wonder and discovery as well as excitement and a tinge of nostalgia.

Patrick: OMG that Rocketeer theme. I hear that and I wonder why that movie wasn't a bigger hit and we didn't get five more Rocketeer movies.

I'm a fan of Horner's collaborations with James Cameron -- yes, even the sticky syrup of his score of Titanic and his "I guess this is sort of tribal?" score for Avatar -- but my favorite piece of score he wrote for any Cameron movie is "Bishop's Countdown" from the climax of Aliens. It's exciting and intense and nerve-wracking, just like the final hour of that movie. It should also be familiar to anyone who saw a trailer for any action movie from about 1990-1996.

Adam: I'm glad you picked that piece of music from Aliens because if you didn't I was going to. I just re-watched Aliens last week and while I like the movie, I think I'm always watching it just to get to the alien queen climax and the James Horner music is a big part of the reason why that is.

My next choice is another score that I heard in a trailer before hearing it in the actual context of the movie it's from and that's the end titles to Cocoon, which is a movie I never cognitively have seen. Should I see it? I remember my parents put it on when I was really young but I have no recollection of the movie whatsoever. Anyways, I remember the music from the trailer for Super 8 and it's just perfect and heartbreaking. It feels like the Amblin theme to end all Amblin themes.

Patrick: I love "The Ascension" too, though it's also because of its use in the Super 8 trailer (which I loved). I have no attachment to Cocoon one way or the other, maybe because I didn't see it when I was a kid and maybe because I can't stand old people. What's up with all of James Horner's music being used in trailers for other movies?

My next pick isn't so much a score I love as it is one that I hold dear to my heart, and that's his theme for Commando. Not only is the movie very important to me -- it's the first R-rated movie I was allowed to see and played a big role in my lifelong love of #HeavyAction -- but I just love how whacked out Horner's calypso-infused score is. There's little about it that suggests it's the right fit for an action movie (save for its urgency), but it has such a weird personality that it ends up giving the movie weird personality, too. And when it melts into one of Horner's typically gorgeous string pieces (right around the time John and Jenny Matrix are feeding the deer and swapping the same flavor of ice cream...seriously, they trade cones even though they're both vanilla I LOVE THIS MOVIE), it's a different kind of great.

Adam: James Horner had an interesting career. It wasn't all lush, classical scores; instead, he had some eclectic ones mixed in as well, like Commando's score and also the one he did for Honey, I Shrunk the Kids (which I'm watching at home this afternoon in between naps). I miss the late '80s - early '90s Disney/Touchstone/Hollywood Pictures days.

My final pick is the one I have the most childhood affection for and that's the main theme from Willow. I love how boisterous it is at the beginning but then evolves into something more wistful before kicking into gear again. It immediately makes me want to go on an adventure all LOTR style. Hand me my sword! I just got back from visiting a bunch of theme parks and this theme takes me back to that feeling of excitement you get when you're exiting a great roller coaster ride. I wish Willow was more of a hit so there would have been more Willow movies. I really dig that movie. BTW...James Horner did a ton of Ron Howard scores! It looks like that's another director he aligned himself with along with his great work with James Cameron, as you previously mentioned.

Patrick: I used to fall asleep to the Willow score every night as a kid.

Adam: This is why we're friends.

Sadly, James Horner is no longer with us, but he still lives on through some fantastic music and he left us with one last score for Antoine Fuqua’s The Magnificent Seven coming out later this year.