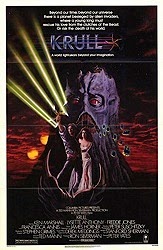 You Glaive your love to me softly.

I have terrible news for the 7-year old me: Krull is dull.

This comes as a crushing blow to my childhood, as Krull was a favorite back then. Like several other ICFT'80s titles, it was on cable a lot and my siblings and I would watch it every time it aired on HBO. Its high points remain stuck in my head all these years later, like the screeching noise the expendable bad guys make or the old wizard deflating in the swamp or the enormous translucent spider skittering across its web. That stuff is awesome. What I had managed to forget is all of the dead space in between those moments. Krull might be 70% dead space.

The film begins with the recitation of an ancient prophecy, because of course it does. Krull gotta Krull. It states that a girl will choose a king and their son will rule the galaxy. The girl in question is Princess Lyssa (Lysette Anthony, Without a Clue), who is attempting to marry Prince Colwyn (Ken Marshall). Unfortunately, the possibility of seeing the prophecy fulfilled doesn't sit too well with a space monster known as The Beast and his army of Slayers, who invade the planet Krull (Krull is the name of the planet) and interrupt the wedding. They kill the king and kidnap the princess, necessitating a rescue mission organized by Colwyn, the only survivor of the attack. Before he can kill The Beast (whose ship the Black Fortress teleports to a new location every day), Colwyn must recover an ancient five-pointed weapon known as the Glaive, probably the coolest magical weapon in all of '80s fantasy cinema. So he sets out on his dangerous quest, along the way assembling a team that includes a magician, a cyclops and a band of thieves that includes a young Liam Neeson. Most of them don't fare so well. 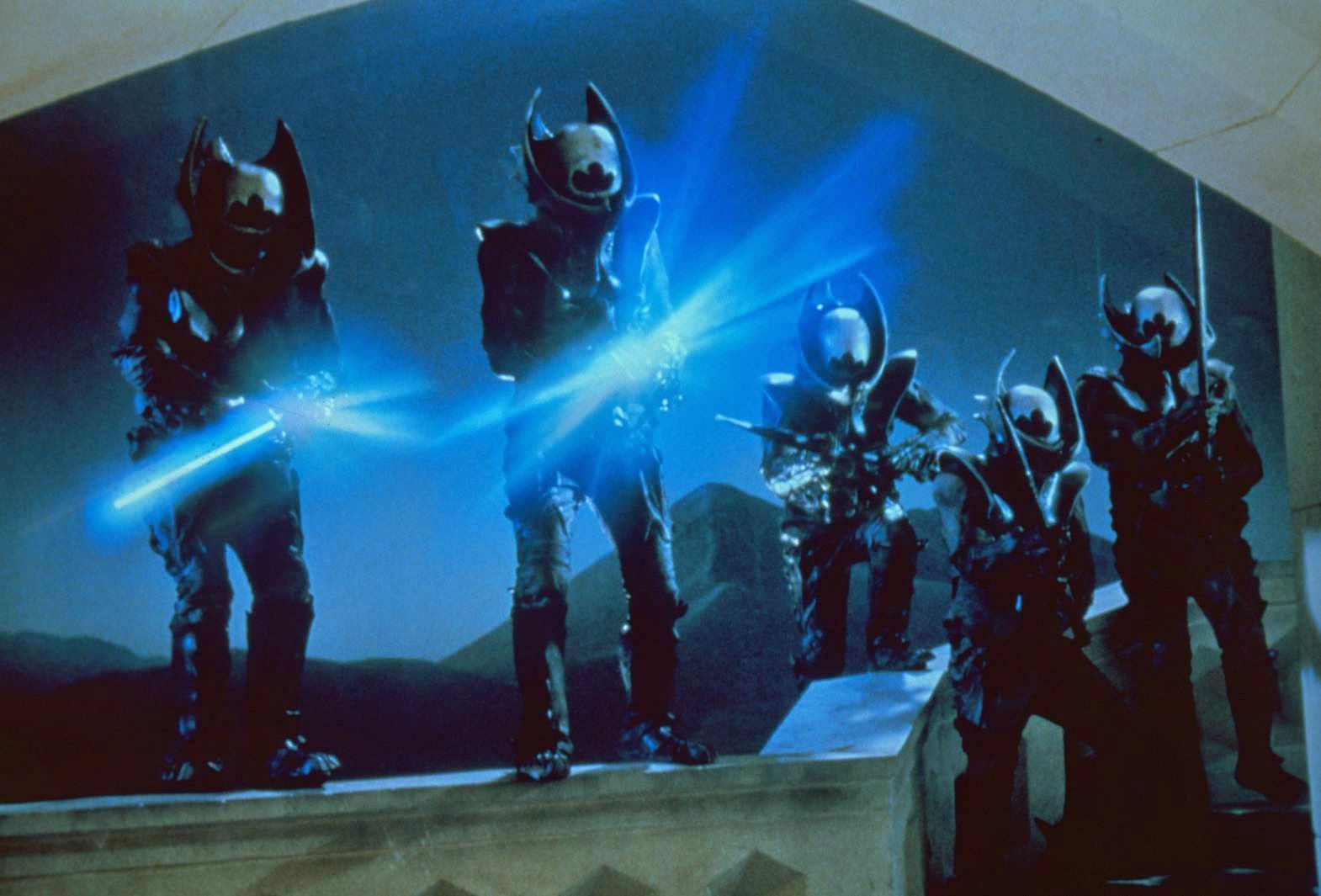 With Krull, we've got a real Frankenstein situation on our hands. It's not because the movie is stitched together from parts of other better movies; it's a traditional hero's journey, but I'd hardly call it "derivative." It's because as with Frankenstein, most people are referring to the wrong thing when they say Krull ("Excuse me, but Frankenstein was the name of the guy...I believe you're referring to Frankenstein's monster..." [pushes up glasses, drinks chocolate milk, dies alone]) So many people -- including me when I went years without seeing it -- assume Krull is the name of the hero. Or a monster. Or that cool weapon. No, Krull is the name of the planet. IT'S THE PLANET, PEOPLE.

Like so many genre movies from the '80s (particularly those we absorbed as kids), Krull stands out in our memories because it has so many highlights -- indelible images and moments that burn in our brains and take up valuable real estate where our high school locker combinations or children's birthdays ought to be. Even when the title and plot of a given movie has vanished, we'll remember a scene or a monster or, in the case of Krull, just the hero's weapon of choice. More than once I have heard from someone who remembers the Glaive (usually describing it as some sort of bladed boomerang/throwing star mash-up) but nothing else about Krull.

And the high points are cool! Things get off to a great start with shots of space and a score right out of Star Trek II: The Wrath of Khan. This should come as no surprise, as both were composed by James Horner, who was either rushed to turn around his Krull score at the same time as Khan and therefore had to recycle aspects of it or else was just phoning it in. Because I'm such a mark for '80s sci-fi fantasy, the end result is the same: I immediately get lost in my own excitement for the adventure to come. And there's neat stuff beyond that, too. The '80s offered an abundance of both science fiction and fantasy films, but Krull is one of the few to combine them both -- it's a movie with swords and lasers. The sets and production design feel big and expensive, giving Krull an A-list feel at a time when most genre films were knocked out quick and cheap. Then there are those images and moments already mentioned, like the screech of the Slayers or the gentle smile of Rell the giant cyclops. There's the treacherous journey through quicksand and the clear stop motion spider, such a cool and old-school effect. 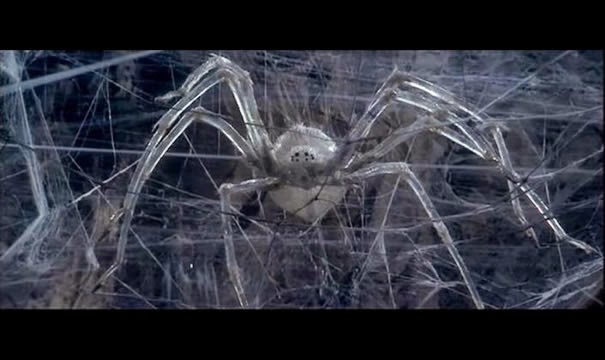 But the spider scene is indicative of what's wrong with Krull in that it goes on for a long time, has little sense of urgency and not much actually happens. It's a sequence that might have a gem at its center, but director Peter Yates refuses to chip away at the rock surrounding it to dig it out (and no, I clearly do not know how gems work). The thing that hobbles Krull, and which I didn't remember until seeing it again a few years ago, is that it is simply too LONG. Its running time is listed at 121 minutes, but the actual running time is seven hours. I joked at the time that Yates too often lets things play out in real time, but I'm not even sure that's a joke. I'm reminded of another classic ICFT'80s title, The Beastmaster, which director Don Coscarelli had taken away in the edit so that the producers could make every scene longer (this is a thing that really happened). The result is a a movie that feels draggy and bloated when it should be peppy. Movies with wizards and cyclopses and giant spiders should not lose our attention. Those things are awesome. But when we have to wait through multiple real-time journeys on horseback to get to the next awesome thing, the awesomeness is diluted. Awesomely.

Case in point: when Colwyn has to climb a mountain to locate the Glaive, we don't watch him start up the mountain's face and then cut to him at the top. We must watch him climb the entire mountain in real time while James Horner's score works overtime to convince us that what we are seeing is thrilling. It's all the more frustrating because it takes him twice as long to climb the mountain as it does to actually recover the Glaive, for which he just needs to stick his hand in some lava. That sounds painful and dangerous, but it's not. He just reaches in and pulls it out like so much change in between couch cushions. 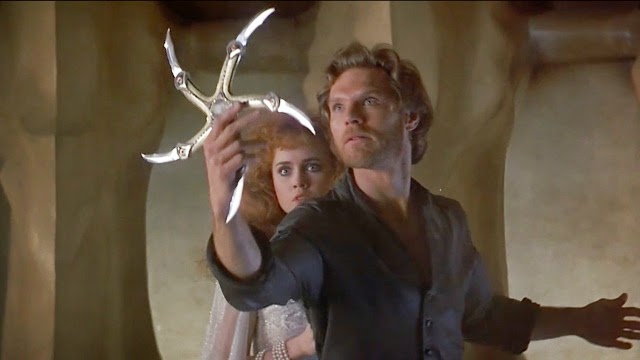 The entire final stretch of the movie is tedious. The group captures a special breed of super fast horse known as the "fire mares" (named because there are literally flames underneath them as they run), riding them to find the Beast's fortress before it teleports to a new location and is lost to them yet again. The sequence goes on FOREVER. When I say that it takes place in real time, this is what I'm talking about. It's Krull in a nutshell: an interesting visual undermined by terrible pacing and a lack of urgency, made all the more egregious because the scene is completely ABOUT URGENCY. It is interminable.

Things don't get much better inside the fortress, when all the cool shit should finally be happening. There are shootouts and death traps and Colwyn's men are picked off at an alarming rate, but the editing throws most of it away. We don't really know any of the travelers well enough to be moved when they die despite the movie's best efforts to make us feel something. Plus, they are killed off at such a quick clip in the Act III that it's almost like watching the last third of a Friday the 13th sequel -- we're just watching the body count climb, crossing names off the list until only those we know will survive are left. What could have been the '80s fantasy equivalent of The Dirty Dozen is barely Jason and the Argonauts, with far too much of the film's success resting on the shoulders of a damp Saltine named Ken Marshall. He is spectacularly miscast as Colwyn, not roguish enough to be Han Solo nor charismatic enough to succeed as the do-gooder prince. He's a guy that fits the costume and not much more, and it doesn't help that he's put in charge of a dozen or so much more interesting character actors. 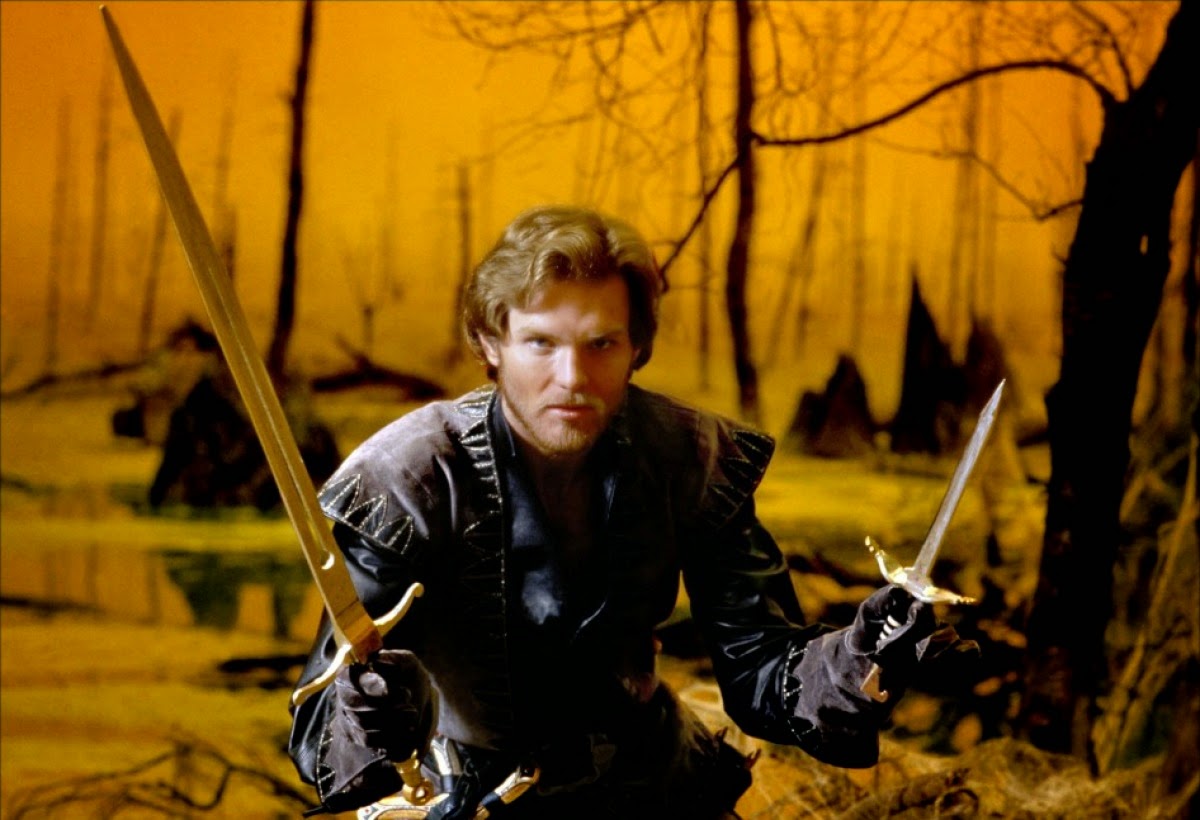 It brings me no pleasure to return to the world of Krull as a thinking adult who is realistic about the world and who has eyes. Of course it still triggers feelings of nostalgia in me, not only because I have specific memories of the film itself but because it represents so much of what the decade had to offer in terms of genre movies. If nothing else, I'm reminded of the Atari game, which I never actually played but did watch a friend play for a really long time (because that's how I roll). Titles like Krull are the reason this column exists in the first place. But my affection for it does not compensate for its flaws, nor the fact that it is a cool and entertaining 90-minute movie that runs for over two hours. The movie will forever hold an important position in the hearts and minds of '80s movie nerds like me, but it's not entirely deserved.

At least we'll always have the Glaive.