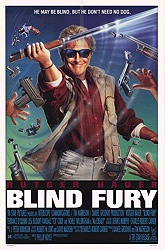 Just as Walter Hill's Last Man Standing adapts Akira Kurosawa's Yojimbo as an action western, the 1990 Rutger Hauer vehicle Blind Fury is basically Zatoichi the Blind Swordsman reimagined as an American '80s action film. And just as you would expect from that description, it is a crazy amount of fun. This was my first viewing of the movie, and I'm sad it wasn't in my life sooner.

Hauer plays Nick Parker, who, as the movie opens, is an American soldier fighting in Vietnam who is blinded following an explosion. He is nursed back to health by villagers and shown being trained as a swordsman. Fast forward 20 years: Nick is now basically a drifter crossing the country, minding his own business until someone else decides to start trouble. A lot of people start trouble with him, because this movie posits that almost everyone's immediate impulse upon encountering a blind man is to be a complete asshole to him. 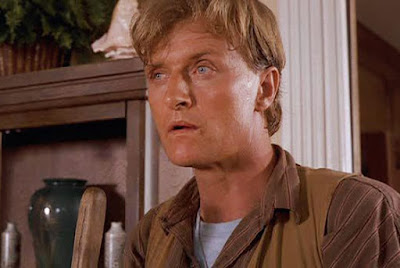 Nick seeks out an old friend who fought alongside him in the war, instead finding his ex-wife and son Billy (Brandon Call of TV's Step by Step), who inform him that his friend is now missing and believed to be in Reno, where he is being held against his will and forced to manufacture fancy drugs to be sold in casinos. Nick and Billy hit the road to Reno to find his dad and take down the bad guys sight unseen. Get it? Because Rutger Hauer is blind.

Why Hauer never quite broke out as an action star I will never fully understand. Maybe he made too much of a mark on the movie-going consciousness playing memorable villains in films like Blade Runner and Nighthawks for audiences to willingly buy him as the good guy. But by the late '80s and early '90s, he had transitioned away from playing villains and was finally getting a chance to be the hero, albeit in smaller and often barely-released B efforts like Wanted Dead or Alive, The Blood of Heroes (aka Salute of the Jugger) and Split Second. It's too bad, because he's more interesting than most of his '80s counterparts. The reason for this? He's a great actor. Most action stars are not (and some, like Bruce Willis and Nicolas Cage, start out as good actors before turning into something...other). They are cast for their physical attributes and abilities; if they have movie star good looks -- JCVD, early Seagal, my boy Scott Adkins -- all the better. Hauer is older and more weathered, more akin to that period's Charles Bronson and Chuck Norris, both of whom where on the way out by the end of the '80s. But he's a great actor, and one needs look no further than Blind Fury for evidence of this. He plays blind very well and is utterly convincing as a badass, going so far as to perform a lot of his own stunts.

The cast of Blind Fury is a #HeavyAction junkie's dream: in addition to Hauer, there's Noble Willingham (The Last Boy Scout) playing a corporate bad guy, Randall "Tex" Cobb playing his number one henchman, Lisa Blount (Prince of Darkness, Radioactive Dreams), Terry O'Quinn and even Meg Foster in a small supporting role. Rutger Hauer gets to fight Sho Kosugi, for crying out loud! They have a sword fight around an electrified hot tub! And Rutger Hauer is BLIND! Why aren't you watching this movie yet? 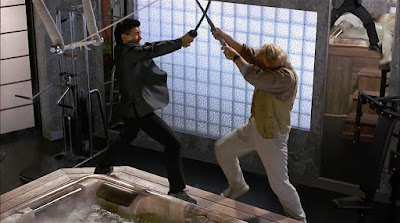 Though it starts and ends strong, there's a saggy middle to Blind Fury that I suspect holds it back from being embraced as a period classic it otherwise ought to be. Once Nick gets to Reno, the film gives way to a weird kind of broad comedy that's out of step with everything else -- the movie has had a sense of humor up to this point, but one which is a lot more wry than the mugging theatrics that surface in the middle. Much of this can be attributed to the performances of Nick Cassavetes and Rick Overton as bumbling redneck criminals tasked with taking Nick out. Their incompetence and face pulling fails to make them at all threatening, and it's in this section that the movie, which was already a little silly to begin with, becomes overtly silly and stylized almost as an action comedy, which it really isn't.

I'm also not crazy about the stuff with the kid. It's not the fault of actor Brandon Call, who would play this exact same bratty, smart-mouthed dickhead of a child looking for his father in The Adventures of Ford Fairlane the same year. It's just the kind of part I rarely want in my action movies, the vast majority of which are derailed by the inclusion of a precocious kid. There are exceptions; Danielle Harris holds her own in The Last Boy Scout, for example, but most of them are of the Edward Furlong/Austin O'Brien/Newt variety. It doesn't help that Nick and Billy spend way too much time being mean to one another, which I guess is supposed to be funny but that depends on how funny you think it is for a child to give a rock to a blind man, telling him it's candy. Somehow, even though Nick has Daredevil powers and can hear that the roulette dealer is cheating, he doesn't recognize a rock when he holds it in his hand and tries to eat it. Then he spits it right in a young boy's face. This is right after they both take turns falling down in mud. You can understand why I like the movie better when Rutger Hauer is cutting guys up with a sword, though one could argue that the entire subplot is worth it for the moment when a wasp is flying around Billy while he sleeps so Nick chops it in half. I guess fuck wasps. 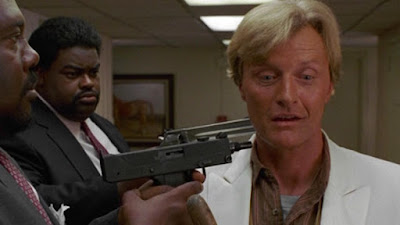 The film is directed by Phillip Noyce, an Australian not necessarily known for being an action director (though he would direct the second and third Jack Ryan films). He made Blind Fury just one year after his masterful thriller Dead Calm, which suggests to me that the years between 1988 and 1990 represent the zenith of his career. By the '90s he would move on to slick, big budget Hollywood product like the aforementioned Jack Ryan movies, plus Sliver and The Bone Collector and The Saint with Val Kilmer. Now he works primarily in television, because I'm pretty sure that's what working with Val Kilmer does to a person. Noyce approaches Blind Fury with a deft touch, providing Hauer plenty of space to show his stuff and highlighting the fight choreography with long takes and wide shots. And because it's a movie in the tradition of '80s action cinema, Noyce doesn't pull punches with the violence. When your hero uses a sword as his primary weapon (cleverly hidden inside a walking stick, just like Zatoichi), you want to see bad guys getting limbs cut off and stuff. Noyce indulges us. In fact, Randall "Tex" Cobb has one of the great bad guy deaths of any '80s action movie. George Lucas might owe this movie some residuals.

Even with its problems, I'm a big fan of Blind Fury. It's too bad that the movie wasn't more of a hit (I seem to remember it playing mostly drive-ins when it opened near me in Chicago), as I would welcome a sequel chronicling the further adventures of Nick Parker. While that never came to pass, the original is still very much worth tracking down. Pay no attention to the movie's awful theatrical poster, which makes it look more like an outrageous comedy in which blind Rutger Hauer tries to get laid or switches bodies with his dog or some shit. There is currently no US Blu-ray of Blind Fury, though Mill Creek has been putting out a number of Tri-Star titles, so there's hope. It wouldn't be my first choice, but it's better than nothing. This movie is too cool to just disappear.