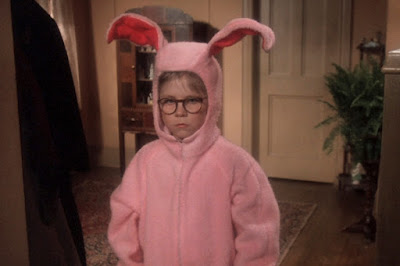 One of the unsung heroes of Canadian cinema gets his due.

Director Bob Clark had a fascinating and uneven career. He started out making inexpensive horror films and had a lasting impact on the genre, mixing tones, infusing politics and, most of all, establishing a template that would influence every generation of horror directors that followed. He then switched to comedies, where he found great financial success and made such a name for himself that he's much more remembered for being a comedy director than a horror one. Though he had his string of failures in the second half of his career, Clark was a jovial and gregarious filmmaker whose work is idiosyncratic in the best way. Here are his essential movies. 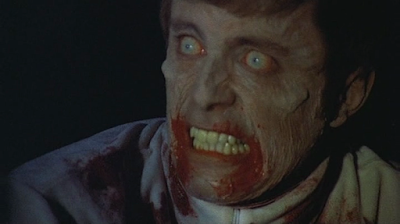 2. Deathdream (1974) Taking a monumental leap forward with his second film, Clark's sophomore effort Deathdream (aka Dead of Night) isn't just better movie than Children Shouldn't Play With Dead Things, but arguably one of the best horror films of the '70s period (a feat Clark would achieve yet again with his next movie). A soldier believed to be killed in Vietnam returns home to his family, only something is...off. Not only is the movie incredibly creepy and disturbing, but also a heartbreaking meditation on grief and a bolt of righteous anger over how so many young men came back from Vietnam irrevocably changed. Clark appears to have learned all the right lessons from Children Shouldn't Play With Dead Things and commits the stuff that worked about his first movie to feature length.

3. Black Christmas (1974) Not content to make just one great horror film in 1974, Bob Clark made Black Christmas the same year, creating a new classic and pretty much inventing the modern slasher movie in the process, even if it wouldn't catch on until John Carpenter made Halloween a few years later. The premise is as simple as any slasher film: a group of college girls living in a sorority house are picked off by an unseen killer who keeps making phone calls and speaking in the scariest voice you've ever heard. Any of that sound familiar? All of it you say? Black Christmas helped create the template for the vast majority of slasher movies going forward, but it's also a great horror film in its own right -- an excellent cast, effective atmosphere and claustrophobia (it just seems so goddamn cold outside), good scares. The trio of horror films Clark made in the '70s makes me a little sad that he didn't continue making horror films. 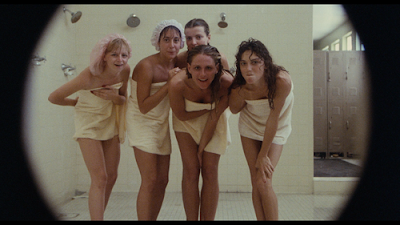 4. Porky's (1982) I'm torn about Porky's. On the one hand, the movie was Clark's biggest financial success to date and is considered to be a classic of the teen sex comedy genre (which, as he had done for the slasher genre with Black Christmas, Clark played a huge part in creating). On the other, it forever changed to course of Clark's career, steering him away from the cool genre films he was making in the '70s and towards Hollywood comedies. I can't say he wasn't as well suited for comedy (because A Christmas Story proves otherwise), but he only ever got one more script worthy of his considerable talents. Porky's is also worth noting because as far as I can tell it's the only time he was credited above the title: it appears on screen as "Bob Clark's Porky's, like he's John Carpenter or some shit. The movie itself isn't all that funny in 2016, having been copied so many times in the '80s and '90s (through the sex comedy resurgence of the American Pie franchise). The shock value of the outrageous behavior on display has long since worn off and there are easier ways for young people to see nudity these days, making Porky's something of a relic. I guess if we can view the nostalgic period setting as a warm up for A Christmas Story, the movie serves a noble purpose. It went on to become the third highest-grossing movie of 1982 and was, at the time, the most successful Canadian film ever made. Clark came back to write and direct the sequel, Porky's II: The Next Day, one year later.

5. A Christmas Story (1983) The one Bob Clark movie that almost everyone is sure to have seen adapts writer Jean Shepherd's memoirs (primarily In God We Trust: All Others Pay Cash) into the story of Ralphie (Peter Billingsley), a young boy growing up in the 1950s and his experiences of wanting a BB gun more than anything one Christmas. Few films are able to so deftly balance the mix of sweetness, nostalgia, childhood pain and a demented sense of humor the way Clark does in A Christmas Story, which is undoubtedly a big part of why it seems to speak to such a huge number of people -- it's got something for us all. Nowadays the movie is shown literally around the clock every Christmas time, an "honor" bestowed on no other film that I can think of. Though he had already made a handful of films that were either great (Deathdream) or classic (Porky's) or great and classic (Black Christmas), this is the movie for which Bob Clark will forever be remembered. There are worse legacies to leave. 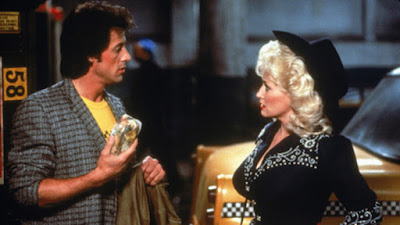 6. Rhinestone (1984) Having directed a pair of financially successful and beloved comedies, Bob Clark became one of the go-to names for Hollywood comedies in the 1980s. This explains how he wound up at the helm of Rhinestone, a high-profile and expensive musical comedy featuring two huge stars, Sylvester Stallone and Dolly Parton, forming a country duet. Nowadays, the title of the film is synonymous with ill-conceived failure, but that ignores just how hot the two stars were in 1983/84. This seemed like a can't-miss proposition to some. It misses in a big, big way, even if no movie with Dolly Parton and Tim Thomerson in a supporting role can be considered all bad. Stallone has claimed that the movie was intended to be grittier and weirder with Mike Nichols at the helm and suggests that the silliness of the finished film comes from Clark. I can believe that to a point -- having seen Clark's later output, I know that silliness is not something from which he shies away -- but I also think it's patently unfair to lay the failure of the film at Clark's feet. Stallone reportedly rewrote the script (because that's what Stallone always did) to the point that original writer Phil Alden Robinson (Sneakers, Field of Dreams) considered having his name removed. What I like best about the movie is that it's one of the first examples of Clark shooting comedy in widescreen, something few comedy directors do.

7. From the Hip (1987) Here's where I really start to lose the thread of who Bob Clark was as a filmmaker. Rhinestone was his attempt to make a big, commercial studio comedy and became noteworthy for the scale of its failure; his 1987 courtroom dramedy From the Hip (which he co-wrote with David E. Kelley, because of course) fails in a much more forgettable way. Judd Nelson plays Robin "Stormy" Weathers, a young lawyer who wins cases by being the biggest raging asshole who ever walked into a courtroom. I think his antics are supposed to be funny, but the only real result is that it gives Nelson -- a guy who already has a tendency to go "big" (SMOKE UP, JOHNNY) -- free reign to flare his nostrils like a motherfucker and tear up the scenery. Not in a good way. Then, in the second half, the film becomes a serious courtroom drama about the ethical dilemma of how Robin can defend an accused murderer (John Hurt) when he knows he's guilty. Neither half really works, and some of the tonal issues that would affect Clark's work from here on out begin to show up. It even fails as a star vehicle for Nelson because it showcases some of his worst habits. At least it's shot in widescreen, though. 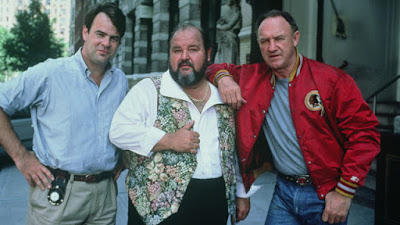 8. Loose Cannons (1990) Clark tries to go back to doing wacky comedy with this buddy pairing of Gene Hackman and Dan Aykroyd trying to solve a series of murders that revolve around a Hitler sex tape. I love Gene Hackman, I love Dan Aykroyd and I love buddy cop movies, but Loose Cannons really doesn't work: Hackman is stranded, Aykroyd does Coulier-level mugging as a cop with multiple personalities and Clark makes everything so silly that there aren't any stakes. I would love to have seen him take a more serious stab at a buddy cop movie, as I think he could have made a great one. By 1990, though, Clark was too far from the filmmaker he once had been to pull this one together.

9. Baby Geniuses (1999) What happened to Bob Clark? Having worked in TV for most of the '90s, he came back to theatrical features with this, widely considered one of the worst comedies ever made. It's not even like I can acquit Clark by chalking this up to one of his for-hire jobs and saying "well, directors have to work," as he is credited as a co-writer on the screenplay. The unfunny premise -- that a group of babies learn how to talk and gain super intelligence -- is made worse by bad special effects and performances drowning in flop sweat. I love Bob Clark, but this is about as bad as studio comedies get. The one nice thing I'll say about the movie? Kim Catrall is in it, having previously worked with Clark on Porky's and Turk 182!. The guy is loyal.

After Baby Geniuses, Clark would direct a few more family-friendly films like The Karate Dog and the Nickelodeon production Maniac McGee before sequelizing Baby Geniuses in 2004 with Superbabies: Baby Geniuses 2, his last credit as a director. It hurts me to pile onto that movie since it's the last one he made, but it has a reputation for being ever worse than its predecessor, earning a 0% on Rotten Tomatoes and making back less than half its $20 million budget.

Bob Clark and his 22-year old son Ariel were tragically killed by a drunk driver in 2007. It's awful. They were too young, too talented and too wonderful to be taken away so soon. I don't care that he was making Superbabies movies. I miss Bob Clark. 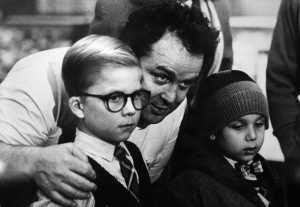