Riske Business: To Hell and Back: A Moviegoer's Journey

I needed a pep talk. So I decided to write one for myself.

For this week’s Riske Business column, I want to go back to the beginning – the first Riske Business piece I wrote called “A Pep Talk to the Frustrated Moviegoer.” The reason being is that something in me has broken as a filmgoer and I want to repair it. I’m a person who loves movies that now hates almost everything about going to the movies. In my heart I know that if I had the option of seeing any movie in theaters or watching it at home, I would choose the latter each and every time. This fact made me sad. Where does that leave me in terms of writing for a movie blog? (I.E. Am I just going to be writing about old shit?) Can I consider myself a dedicated film fan anymore or am I past my prime and relevancy? What will be my new hobby if I’m not going to the movies anymore? Surely, I can’t stay at home all the time watching movies that way… 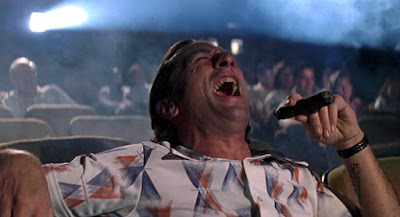 These feelings have been bubbling under the surface for a while and have finally come to a head. For example, I’ve found myself walking out of movies at a pretty constant rate in the past couple of months, sometimes because the film was not good and sometimes because the atmosphere in the theater was bad. The movie that finally broke me (and made me want to evaluate how I was feeling) was Captain America: Civil War. For the record, I’ve seen the movie once, but I’ve gone to the theaters to see it three times. The first time I tried to see it was the Thursday night before it opened. I was all excited to see CA:CW, primarily because it was the first movie of the summer movie season, but that experience was quickly spoiled by a couple sitting a few seats to the left of me who decided to talk throughout the entire first act of the movie. These people not only did that but they also got up and walked past me (to get more drinks) at least three times at different stretches of the movie. These people don’t care about anybody but themselves. It was enough to ruin the movie for me and I left the theater early vowing to try again at a different theater.

On my second attempt to see Captain America: Civil War, I went to a theater nearby my home which (to my surprise) recently decided to adopt the horrible concept of assigned seating in their theaters. I got to the movie 30 minutes early and my heart immediately sunk when I saw that my assigned seat was about five away from a group of teenage boys. I like to think of myself as a non-discriminatory person but I know (having been one) that a group of teenage boys are more likely than not to misbehave and or be annoying during a movie. To their credit, not all of them were acting up but some were and it sucked because I had an assigned seat and theoretically couldn’t just move away from them in the theater. If the theater had open seating, I sure as shit wouldn’t have chosen to sit in the same row as these kids. So, I dealt with it and sit in my seat and stewed until another gentleman showed up (also by himself) and sat right next to me in his assigned seat in a theater full of other empty seats. I wasn’t on board with this. Fuck assigned seating!

First off: what was he thinking seeing a diagram with the cinema’s open seats and then picking one right next to another person that is a stranger? (The seats to the right of us [closer to the teenage boys] were open). Second, when you realize you’ve done this, don’t you just move over one as a buffer and then move back to your assigned seat if you realize that the one you moved to was sold? But no, this guy didn’t so instead we were crammed together, fighting over an arm rest, like we were on an airplane. Word of advice: if you’re on an airplane and there are three seats to a row and only two people are in the row, move over so there’s a buffer seat. Same thing should apply with assigned seating at a movie theater. After 30 minutes, I couldn’t take it anymore and left because I was feeling so claustrophobic.

The third time was almost not the charm seeing Captain America: Civil War. I went to see it at the big megaplex nearby because I figured surely with 500+ seats I would have room to stretch out and it had open seating, so if I was by talkers I could move, right? Well, it was almost not meant to be. I got there 30 minutes early (again) and sat down. Everything was fine until the theater filled to capacity and I found myself sitting next to what was probably a 10-year old boy. No big deal, but this kid was FREAKING OUT. His dad left him to go get popcorn and once his dad left he started to profusely cry and every once in a while say things like “DADDDDDDYYYYYY!!!!! HURRY!!!!!WHERE ARE YOU?!!!!!” The child seemed to have emotional issues so I don’t want to pick on him, but at the same time I just want to watch fucking Civil War. He’s not my child. I don’t want to deal with this shit. So I found a new seat (near the front of the theater….ugh!) and switched seats. There I sat and watched the entire movie in peace and quiet. Am I a heartless dick? Probably, but I need my moviegoing experience to be the way I want it to be and that’s getting more and more difficult for me.

I’m part of the problem too. I can’t stop looking at my phone. This is a recent development but I simply have to look at my phone. I resisted getting a smartphone forever (my friends and family can attest to this) because I didn’t want to become a phone zombie, but six months into having one, I certainly have become one. If I have a millisecond where I’m bored or have dead air, I’m looking at my stupid fucking phone and it’s killed my attention span, especially when seeing a movie in a theater. This was becoming a real problem. To my credit, I’ll go out of sight of the audience (in the doorway or out in the hall) to check my texts, Facebook, Twitter, etc. but I never used to have to do this pre-smartphone era. Something in me broke. I care more about what’s happening on social media than I do about the actual movie I’m watching in most cases. 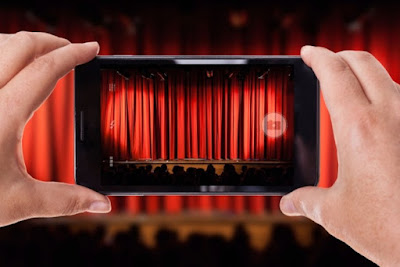 So where does that leave me? Where’s the pep talk? Well here it is. Adam, I want you to leave your phone in your car every time you go see a movie. I want you to go out of your way to only see movies in theaters with open seating. I want you to arrive to movies closer to show time so you don’t have to move seats. I want you to go see movies in off-times where there are less people. But mostly, I want you to get out of your head so much and just go back to enjoying being at the movies. Maybe the problem is that I go too often by myself and thus it’s become a more academic endeavor than a communal one. I’m not sure, but that might be worth exploring another time in a different column. After all, when I’m at the movies with my friends, a date, or family I never seem to have these problems. I want my life to be AMC Amazing again!
Posted by Patrick Bromley at 12:00 PM