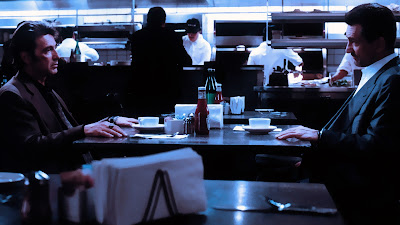 Michael Mann’s characters are often obsessive malcontents, frustrated artists who live for the work and find very little reason to compromise their values. His is a world of extremes: loud guns, bright lights, dark alleys. You’re either on or off. In or out. There is no in-between. This is never more true than in his 1995 masterpiece, Heat. But while it’s often remembered for its realistic heists and for pairing Robert De Niro with Al Pacino for the first time (not to mention a truly amazing Jon Voight mullet), the most interesting thing about Heat may be the way it highlights the grey areas between extremes, the space between action and reaction. It’s a film about people who struggle to find this balance and the danger they get into when they fail to do so.

Master criminal Neil McCauley (De Niro) and his band of merry men (Val Kilmer, Tom Sizemore, and Danny Trejo) are on a tear through the Los Angeles financial sector, pulling down score after million-dollar score. They’re top-tier professionals and skilled strategists with a complex network of financiers and fences who can flip everything from bearer bonds to precious metals. Every element of each job is meticulously planned. There is no wiggle room. Nothing is left to chance. Of course, in Michael Mann’s world, the shit is never far from the fan: after an armored car heist goes tits-up, McCauley and his crew find themselves the targets of a jilted money launderer (William Fichtner) a vengeful psychopath (Kevin Gage), and the LAPD Major Crime Unit, led by Lieutenant Vincent Hanna (Pacino). Hanna is a brilliant and relentless detective who thinks he’s finally met his match in McCauley. The two begin a complicated game of cat and mouse and learn what John Woo’s been trying to teach us about cops and criminals for thirty years. 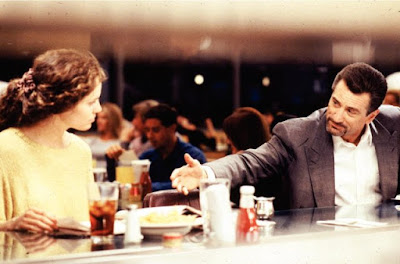 Anyway. With McCauley’s singular brilliance comes the central thesis that Mann will test throughout Heat: “Don’t let yourself get attached to anything you are not willing to walk out on in thirty seconds flat if you feel the heat around the corner.” McCauley has no wife, no children, and no furniture. Though this solitary lifestyle has kept him rich and out of prison for years on end, the beautiful Eady (Amy Brenneman) shows up just in time to challenge his commitment to the Straight and Narrow. Worse off is McCauley’s protégé Chris Shiherlis (Kilmer), a battered addict drifting further and further away from his wife Charlene (Ashley Judd), who is herself wrapped up in an affair with sleazy businessman Alan Marciano (Hank Azaria). Hanna is deepest in the shit, though, teeing up divorce number three and wading through an endless cesspool of rapists and murderers who are pushing him toward Maximum Coke-Addled Pacino. It’s clear at this point that Heat is not just about cops and criminals, but also the dangers of loose ends and family ties.

And that’s the rub. Each and every character in Heat has a harder time of it because they’ve decided to care for someone else. Hanna’s life is perfectly summed up in his opening scene: Crazy Naked Sex followed by emotional distance and bottled-up angst. His wife will never be more important than his work, and they both know it’ll never change. His stepdaughter Lauren (Natalie Portman) chases the ghost of a biological father who has never once been there when she’s called. Shiherlis should be McCauley’s cold-blooded, steely-eyed dragon, but his sun rises and sets with Charlene and their son Dominick, which McCauley considers a real pain in the ass. Ex-con Donald Breedon (Dennis Haysbert) busses tables at a shitty diner because he made a promise to the only person who believes in him. Trejo betrays his boys in order to save his precious Anna. It goes on and on. The irony is that while these relationships feel right, not a single one seems to be strong enough to satisfy any of their real interior needs. So maybe McCauley is right; maybe it’s best to just let go.

But this is why the Diner Scene is so important: it introduces McCauley to someone who knows what he’s going through, someone who has just as much trouble believing in barbecues and ball-games as he does. The difference is that while Hanna’s life may be a disaster zone, he still has a life. His journey through the last act of the film is all about showing him that ties bind for a reason. Ralph, the television set, Lauren in the bathtub, it all adds up. But by the time McCauley sees it for himself, it’s too late. He’s running across an airstrip alone because he’s never taken a real emotional risk. While he may be saving Eady a lifetime of hurt by abandoning her in the car, his commitment to going down swinging makes him seem so small in the face of everything happening around him. It’s true that love and life are messy, complicated, emotionally draining endeavors that are hard to quantify against an amount of money or a number of years on a prison sentence, but how is McCauley’s fate any better?

The Mann himself has said that Heat is about the choices you make and how they reverberate for the rest of your life. Charlene chooses to help Chris escape. Hanna chooses to save Lauren’s life. Eady chooses to run away with McCauley. And while some of these choices are harder than others, each one says something significant about the person making it. Note the choices that lead to disaster (the gang choosing to stay together, McCauley choosing to go after Waingro, Breedon choosing to rob the bank) always come from weak and selfish states of mind. Heat has a lot to say about guns and gangsters and all that, but its most important lesson might be that loose ends have value. Our choices always affect others, and whether we like it or not, we’re all a lot more than what we’re going after.