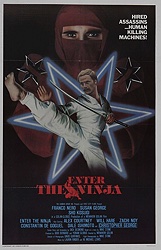 For better or worse (better), Cannon Films played a big role in popularizing ninjas in the 1980s. Through a trilogy of completely unrelated movies save for the use of the word "ninja" in the title and the presence of martial artist Sho Kosugi (playing three different roles), Cannon introduced a generation of video store and cable brats to the highly secret and deadly arts. 1981's Enter the Ninja and its two sequels, 1983's Revenge of the Ninja and 1984's Ninja III: The Domination helped make "ninja" a household name, leading Cannon to continue exploiting the trend with its long-running American Ninja series. Once confined to the shadows, the early 1980s put ninja center stage in pop culture.

The first film in Cannon's ninja trilogy, 1981's Enter the Ninja, kicks things off in glorious Cannon style with clumsy filmmaking, graphic violence and jarring tonal switches. Franco Nero (the original Django) stars as Cole, a veteran who has just completed his ninja training. He goes to see his old war buddy Frank (Alex Courtney) and his wife Mary Ann (Susan George), who are being harassed to sell their house by evil businessman Charles Venarius (Human Cigarette Christopher George*). When they won't comply, he sends another ninja -- Hasegawa (Sho Kosugi), who just happens to be Cole's sworn enemy -- to finish the job. It's time for ninja on ninja action! 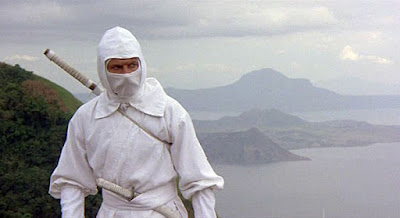 The first thing one notices about Enter the Ninja is just how spectacularly miscast Italian exploitation star Franco Nero is in the lead role. I love Nero's westerns and his cop movies from the '70s, but he is only a slightly more convincing ninja than I am (I am not a convincing ninja). There's something alarming when a badass ninja removes his hood and turns out to be balding with an enormous, bushy mustache. It's like finding out your dad is a ninja. Nero has also been dubbed by another actor for maximum American-ness, which just adds to the feeling that something is off with this character. He doesn't look the part, he doesn't sound the part and, because he's doubled so often by a stuntman during the ninja scenes, he often doesn't even play the part. If he had been cast despite being an unconvincing ninja because he's the better actor, that might make sense. But then he's not even allowed to act the role himself.

The movie is directed by Menahem Golan, co-owner of Cannon Films, who took over from original director Emmett Alston. Golan's approach to making movies -- both as director and as the producer of dozens upon dozens of Cannon films -- is to do away with anything that doesn't immediately entertain. The things that entertain him happen to be lots of violence and dopey comedy, so Enter the Ninja is packed wall to wall with both. This is a movie in which a secondary character has his hand chopped off and then a comically funny song plays on the soundtrack like he's in an SNL "Debbie Downer" sketch. The juxtaposition is unlike anything else in '80s action, which is what I've always loved about Cannon Films: they are so much their own thing and so different from most other films of the period. Enter the Ninja distinguishes itself not just with its "ninja" hook, but also by unabashedly playing right to the pleasure centers of genre lovers' brains. 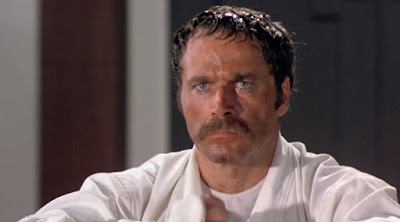 And because Golan is so in love with American cinema, he does little to disguise the fact that he's essentially adapting an old-fashioned western template and trying to graft some Eastern mojo onto it. It's as obvious as dressing the "good" ninja in white and the "bad" ninja in black (other ninjas are dressed in red). The Christopher George is the evil landowner character, Sho Kosugi his hired gun. I've said before that much of what I love about Cannon Films -- and, yes, I love Cannon Films -- is the way that they take familiar American genres like action, horror and teen comedies and then filter them through the perspective of a martian trying to approximate their tropes. This is an apt description of Enter the Ninja, which doesn't quite get either of its Eastern or Western elements right but instead comes up with a weird hybrid that is totally, uniquely Cannon.

The action in the movie is far from great, but we've gotten spoiled by just how fast and intense martial arts movies can be now thanks to filmmakers like Gareth Evans and Isaac Florentine. Enter the Ninja isn't even up to the standards of most '70s kung fu films (in which I have become especially immersed this #Junesploitation) because the action is too slow, the direction too crude. But there's a certain charm to the way the action is built not through onscreen displays of physicality (save perhaps for Sho Kosugi, which might explain how he landed the lead role in the sequel) but through the editing of static shots: ninja hurls throwing star, cut to star flying through the air, cut to star embedded in bad guys' head. If I want to watch a movie with amazing fight choreography, I'll throw on something with Scott Adkins. If I want to remember what low-budget action movies looked and felt like in the early '80s, I'll watch Enter the Ninja. I love it. 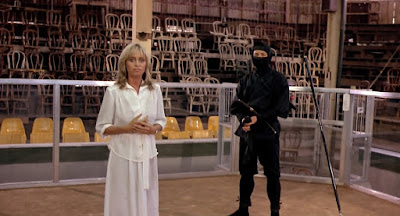 The movie is also like a Junesploitation All-Star game. It's an '80s action movie. It's a ninja movie. It's a Cannon movie -- and not just any Cannon movie, but one directed by the head of the studio. It stars Franco Nero, an actor whose presence almost automatically signifies exploitation. Same with Sho Kosugi. Beyond those two leads, though, the supporting cast includes Christopher George, an actor synonymous with exploitation late in his career thanks to his appearances in movies like Fulci's City of the Living Dead, Graduation Day, Pieces, The Exterminator and Mortuary. Even Susan George (no relation) has a long exploitation resume; though best known for Straw Dogs, she stars in The House Where Evil Dwells, Dirty Mary Crazy Larry, Mandingo, Venom and Tintorera: Killer Shark. She's relegated mostly to playing the damsel in distress here, cheating on her husband with his best friend just before becoming a widow. We aren't treated to her usual crazy Susan George acting, but just her participation is like a seal of quality.

Yes, I love Enter the Ninja. It's the kind of movie many would classify as a guilty pleasure because it doesn't meet the requirements of a conventionally "good" movie, but I'm not a believer in feeling bad about the things I like. This movie makes me very happy, which means it must be good in its way, right? I enjoy all three movies in Cannon's ninja trilogy for different reasons. Enter the Ninja is the most rough around the edges, but also has such a distinct personality that it manages to stand out even in a series in which the third installment features a female electric company employee/aerobics enthusiast who is possessed by the spirit of an evil male ninja. Unlike the majority of the people I grew up with, watching these movies as a kid in the '80s did not make me want to go out and be a ninja. It just made me want to watch more Cannon ninja movies.