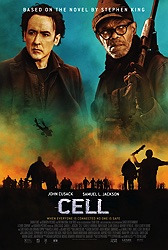 It's been a long road to get Stephen King's 2006 novel Cell to the screen. Shortly after it was published, the book was optioned by Dimension Films with Eli Roth attached to direct. He ended up not doing it. Screenwriters Scott Alexander and Larry Karaszewski wrote a script. It ended up not being used. The movie was shot in 2014, a full two years after the first cast member (John Cusack) was announced. It ended up not coming out. It was picked up to be distributed by Aviron Pictures in 2015. They ended up not putting it out. It was scheduled to premiere at FrightFest in 2015. It ended up not screening.

Now it's 2016 and Cell has appeared on VOD and iTunes ahead of its limited theatrical release in July with no fanfare, no marketing, no word of mouth. It's a movie tree falling in the movie woods. 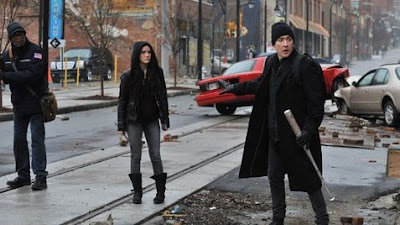 John Cusack stars as Clay Riddell, an artist who, as the movie begins, has just sold his graphic novel and is estranged from his wife and young son. At the airport before boarding an airplane home, something happens: a pulse is sent through everyone's cell phones, turning anyone using them at the time into a snarling, raging killer (not a zombie, technically, but basically a zombie). Clay manages to escape with a stranger, Tom McCourt (Samuel L. Jackson), and make it back to his apartment. There they connect with a teenage girl who lives upstairs (Isabelle Furhman of Orphan) and set out to find Clay's family while avoiding the growing population of zombies, who appear to be...organizing.

Cell is a textbook example of the problems of adapting King's work -- or any pop author, really -- to film. It has no take on the material; no point of view. The screenplay, adapted by Adam Alleca and Stephen King himself, merely stages beats from the novel without really considering whether or not they work in the context of the film -- in other words, stuff happens because it happens in the book. Characters are introduced simply because they are characters from the novel. Those same characters disappear because they disappear in the novel. We don't spend enough time with them for their fates to mean anything at all, and those viewers who haven't read the novel will likely why they made an appearance at all. 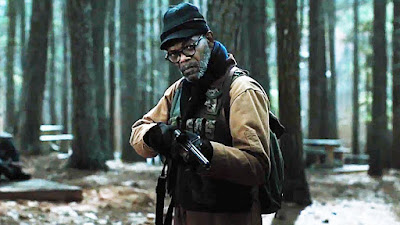 Part of the problem is with the source material. When King published Cell 10 years ago, it already seemed a little bit like an old man coming out against a technology already widely adopted. In the decade since, phones have become so woven into the fabric of our everyday lives that to make a movie in which cell phones are the primary source of fear feels hopelessly out of date and out of touch. But, hey, maybe the phones are just the McGuffin -- the jumping off point for yet another zombie plague. King's book was published before The Walking Dead took off on TV, so following a couple of characters who meet as strangers and band together to travel on foot across dangerous territory and avoid zombies didn't feel quite so overly familiar. The movie does not have the same luxury. There is nothing covered here that hasn't been done better on television. And because he's limited by budgetary restrictions, director Tod Williams' (Paranormal Activity 2) hands are tied. He tries to create some action that feels epic -- particularly the opening airport attack -- but it all just ends up feeling cheap. This is a movie that needed some real money behind it to come to the screen properly.

All of this leaves us with the characters. If we're going to follow a group of survivors through yet another zombie apocalypse -- and that is what this feels like, despite trying to add a few new elements to the proceedings (including some potentially interesting developments that are dropped almost as quickly as they are introduced; this movie can't establish its own set of rules to follow) -- they better be some goddamn interesting survivors. They are not. Cusack pitches his performance somewhere between sad and sleepy to being with, so no amount of increasing hopelessness about ever finding his son can change him. He does have one decent monologue in which he talks about leaving his family in which signs of the old Cusack resurface, but for the most part it's another disengaged performance that's in keeping with his DTV work. Most of the other actors are given roles either too small or to underwritten to register. Only Samuel L. Jackson (who, it should be stated, appeared with Cusack previously in King adaptation 1408, a much better movie) makes an impact. He hasn't been given a part to play despite being based on the book's most interesting character, but at least he's trying. 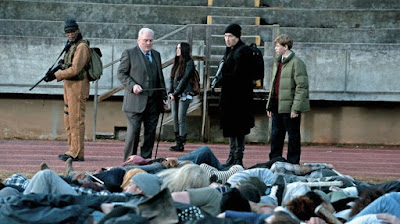 And then there is the ending, which is the only real departure from the source material. King has often struggled with his endings and his original conclusion to Cell is no exception, but I vastly prefer it to the new ending he's come up with for the film adaptation (reportedly to address issues the fans had with the book). Apparently unable to come with a single new ending, the movie instead offers three, each of them problematic and each of them contradicting the other two. The first is too familiar, undone by some shoddy CG work. The second is more of a cop out, but ok. Had the film settled on these two, I could have gone with it. Instead there is a coda that makes zero sense and undoes what came before to such a baffling degree that it feels like no one was calling the shots. It's like a Choose Your Own Adventure in which you don't actually have to make a choice.

It's weird, because as a lifelong King fan there was a time when any new King adaptation -- whether in theaters or on TV -- felt like an event. Even the bad ones. But between A Good Marriage and now Cell, we seem to have entered a period in which Stephen King movies are more like afterthoughts. When Cell failed to make it to movie screens in the first few years following its release, perhaps they should have let it go. The material no longer feels relevant, its execution cheap and lifeless. Cell is one of those books I sometimes forget King wrote, suitably adapted into a movie that's even more forgettable.
Posted by Patrick Bromley at 12:00 PM