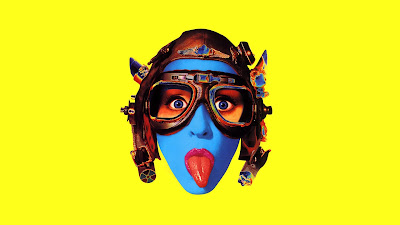 So...Junesploitation…This is what I remember finally be allowed to go trick-or-treating on my own as a kid was like. No parents or supervision—just unencumbered nighttime debauchery featuring lots of fake blood and enough high-sugar-content-crap to make you sick. And lots of cussing.

Needless to say, I’m having a fun first time.

My approach to this raunchy, month-long festival of blood, boobs, and violence is to hit every category with a female-directed film. Because a lot of the categories cater to older genres, this hasn’t been an easy task...but it’s coming along. And I’m cheating a little bit...but who doesn’t? The fun of this challenge is getting to see movies that are not at all what I would normally tune into, the most recent of these being Rachel Talalay’s Tank Girl. 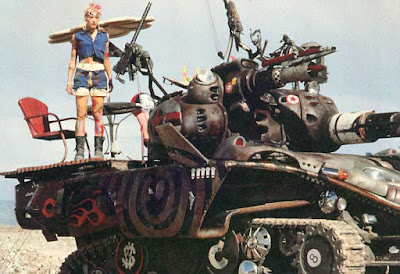 Before I gush too much about this movie and HOW MUCH FUN IT IS it’s important, dear reader, that I give you a little bit of Cait-Cannon-context: I was the bratty girl in high school with pink hair, a homemade pro-choice t-shirt, and a ring on every finger. I talked way too much in class, referencing whatever punk band or feminist column I was into at the time, and definitely made the adults around me cringe. But thanks to finishing puberty and being served many a slice of Humble Pie since then—I’d say I’ve outgrown my punky brewster phase. Sort of.

But man...Tank Girl was like a trip down memory lane...if that lane was listening to L7 and tripping on mushrooms. In my doesn’t-really-like-comic-book-movies-biased opinion, I think Tank Girl did really well what Deadpool was trying to do; she’s funny and crass without just delivering a stand up routine in spandex. (Not to hate too much on Deadpool, I laughed a lot, but—we have to be honest with ourselves—it wasn’t a movie). It also paid some serious homage to the source material in its editing style as well as has enough of its own plot to be refreshing and independent of the comics. I know some Tank Girl loyalists are cursing my name because her “real” story isn’t quite like it is in the movie, but I’m not going to get into that here…

So let’s do it already: the year is 2033 and things aren’t going too well in all things human survival. The earth has turned into a dry, barren wasteland and all water is controlled by a corporate government called Water & Power. As per movie canon, whenever you’ve got a totalitarian style government—especially one that makes a habit of capturing little girls and sucking the water out of people’s blood—there’s always a group of rebel rousers ready to stick it to the man. And Tank Girl (Lori Petty) and Jet Girl (Naomi Watts) are the perfect women for the job. They’re smart and funny, quick thinking and fierce in a world dominated by parodied patriarchal figures. The plot in and of itself is pretty basic, if you’ve seen literally any other dystopian movie with a crust punk flavored rebellion, then there’s not much new structurally. Minus mutant kangaroo people... and the weirdest musical number set in a brothel you’ll ever see... 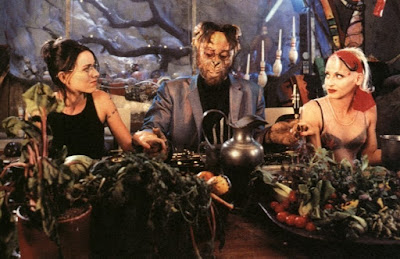 But the real star of the show—beyond the wonderfully outdated pop culture references and a blatant “fuck you,” to men’s entitlement—is the style of editing. Don’t get me wrong, the movie is super goofy, so I won’t spin you a tale of how this film is intellectually stimulating or is capable of inciting any sort of come-to-jesus moment...but it still isn’t without its sophistication. And this is showcased into how it references heavily its comic book roots, not only in art direction, but also in the pacing and style of cuts and beats of the scenes. I appreciate how the movie honors that energy. This is something I have yet to see in any other comic book inspired movie (if you’ve got suggestions, let me know!)—the camera darts around reflecting Tank Girl’s manic nature; the pans are sporadic and fast, she’s often shot tight in crowded, colorful environments—each scene feels like a window in a comic strip.

It’s got similar vibes to Batman Returns or even Blade Runner at times. I admire so much that the movie isn’t trying to be anything other than exactly what it is: a girl-power-fueled movie about a sometimes gross, always awesome heroine and her friend. The girls never talk about romantic interests, they are intimate like real friends are, and they’re just a cool couple of characters to hang out with. This is something that last years “feminist” dystopian movie, Mad Max: Fury Road did not do. Notice the purposeful use of quotation marks in the last sentence… 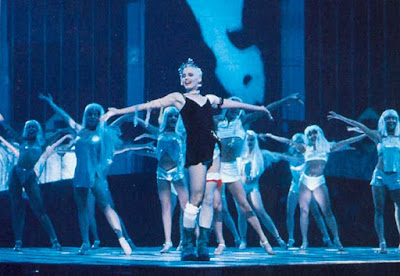 Sure, the movie took me back to my punky teenage years (ha...like only 8 years ago…) and that definitely affects my read of it, but it’s also so comforting to see this kind of female representation on screen. However silly Tank Girl may be, I loved indulging in a quick story where the girls are portrayed as the smart, rational, fleshed out characters. Tank Girl gets to be the titular character, she’s the one that gets to save the day with her friends, and she’s the one that gets to wield her sexuality for laughs. Not the dudes.