The Purge: Up in the Air vs. Away We Go 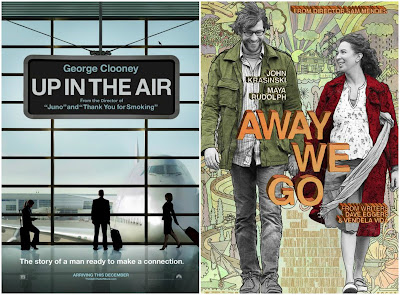 Rob’s DVD shelf is getting a little maintenance – deathmatch-style.

Physical media is a dying institution worth defending. We can stream and download all we like, but nothing beats the satisfaction of a well-manicured collection earned through hours of picking over department store shelves and sorting Amazon wish lists. The really good collections tell others who we are, where we’ve been, and what we like. They give us feature commentaries and deleted scenes that help us become experts on our favorite films; hell, a good making-of documentary can be more enlightening than a year of film school. At the very least, our collections become lending libraries for friends and inheritances for family. But sometimes they grow so large that they lose definition and character. They become tangled messes rather than personal statements. In these cases, we need a cleansing purge to separate the classic and the loved from the middling and the disappointing. Let’s revisit two comparable films and see which one earns its spot on the shelf and which one is found wanting. We’ll start off easy, with two light comedies centered around travel: 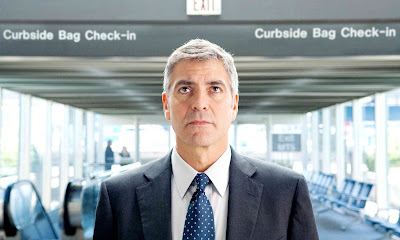 “You’re an escape. You’re a break from our normal lives. You’re a parenthesis.”

Ryan Bingham (George Clooney) fires people for a living. His firm sends dozens of “transition specialists” around the country so that their clients can lay off and downsize without having to deal with the messy emotional confrontations that come with it. You’d think this would be draining work, but Ryan loves living out of hotel rooms and has mastered the art of the empty backpack; his family relationships have lapsed, he has the perfect no-strings Sexy Time Friend in Alex (Vera Farmiga), and he gives seminars on the power of disconnection. But now, twenty-something whiz kid Natalie Keener (Anna Kendrick) has developed a teleconferencing system that will keep Ryan grounded indef-initely and give him no choice but to develop some family ties. Desperate to preserve his way of life, Ryan brings Natalie out on his next round of cross-country firings. He’s sup-posedly showing her how important it is to be in the room, to form real human connec-tions with these poor bastards. In reality, Ryan uses his transitory lifestyle to avoid the-se connections, and he just wants to live out a few more weeks of freedom before sub-mitting to the inevitable scourge of Normal Life.

Up in the Air has an organic confidence that prevents it from turning into the Midlife Crisis Chronicles. Too often, we meet disaffected loners whose apathy is masking some easily-resolvable Freudian excuse or family trauma, but that wasn’t ever going to work with this slick version of Clooney. His Ryan Bingham is smart and tenacious; he has goals and class and a practiced quip to deflect every invasive question. Playing that against Natalie’s ambitious naïveté is smart because it shows that Ryan’s isolation is a conscious choice, not a weakness. By extension, their conflict is more about the why than the what: Ryan finds the career to be the thing, while Natalie believes that career is just one part of a more complex thing. Since each path presents its own difficulties and neither of them is wrong, the film has, you know, dramatic tension. The only bit of trouble that Up in the Air runs into is when it tries to resolve that tension six or seven ways rather than focusing on one (for example, it doesn’t need the final “backpack” conference and the Sam Elliot scene). This is more of a nitpick than a real issue, but sticking the landing is really important in a film this good. 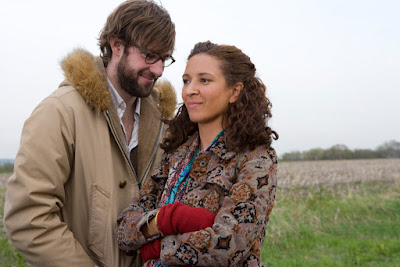 “You have to be willing to make the family out of whatever you have.”

Verona and Bert (Maya Rudolph and John Krasinski) are pregnant and slightly freaked out. They’re old enough, sure, but they’re not exactly the most settled of couples: their little cabin needs a lot of work and they lack any real experience or meaningful career prospects. Luckily, Bert’s mom and dad (Catherine O’Hara and Jeff Daniels) live in the area, so it’s not the end of the world. Nevermind, it totally is: they’re moving to Belgium for two years and leaving the parents-to-be all alone. Rather than debate the various ironies and injustices of their situation, however, Verona and Bert decide to embrace their lack of roots and hit the road in search of the best place to raise their little bundle of paranoia. They visit with old friends and extended family (everyone from Jim Gaffigan to Melanie Lynskey), but find each new city just as disappointing as the last. Verona’s work friends are asinine and cruel to their kids; Bert’s cousin is a New Age whack job who thinks strollers are evil. Not only that, but Verona is still dealing with the ramifications of her mother’s untimely death. Neither she nor Bert knows exactly what they want, but they both believe they’ll know it when they see it.

Neither does Away We Go, apparently. While at times quirky and charming, the film’s major weakness is its episodic structure and over-reliance on eccentric supporting performances. This is indie twee at some of its most superficial and insincere. We never get a sense of the obstacles that stand in the couple’s way, aside from a vague sense of inadequacy. Verona’s hangups about her mother are sad, to be sure, but they have such little effect on the narrative that it’s jarring when they take center stage at the end. The exploration of varying parenting styles is interesting and meant to scare them, but what do they learn from these crazy people? Why does the film bail on its most interesting moment (the Garnett’s miscarriages) before forcing Verona and Bert to deal with it in any meaningful way? There’s no momentum, no stakes. Bert’s final monologue could have been delivered at the beginning of the film and nothing would have changed. Away We Go is Safe and Easy dressed up like Profound and Sophisticated. It asks a lot of great questions about marriage and parenthood but lets itself off the hook without answering them. 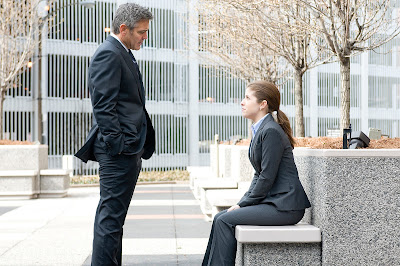 This one was easy. While Away We Go is cute and warm and reaffirms everything we all know about the terrors of impending parenthood, Up in the Air offers solid and interesting characters who grow and change as the story progresses. It’s well-paced and resolves on a really interesting and somber note. The standout performance of both films is Anna Kendrick, who has to force confidence and stay stern-faced while still looking like a strong wind could blow her over at any moment. It’s a really difficult balance that she manages to find without becoming a caricature.

But the final vote is with you, F-Heads. Did I make the right call? Did my love for Anna Kendrick cloud my judgment? Why does John Krasinski leave his glasses on in bed? Do you care either way? Leave it in the comments.
Posted by Patrick Bromley at 12:00 PM